Hope for peace in Syria fades as Russia backs away

Fighting has escalated in Syria, and Russia has started to arm pro-Assad forces. A peaceful end to the civil war is looking less and less likely. 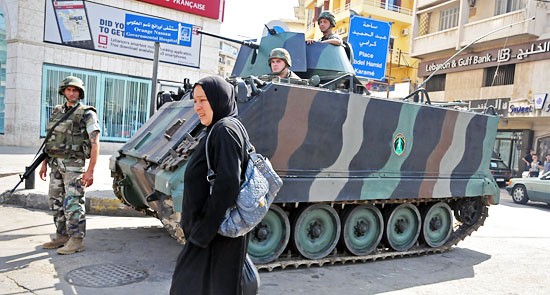 There was a moment of hope, a week ago, that there could yet be a negotiated resolution to the Syrian civil war. That hope now appears ended, with key Syrian government ally Russia backing away from what could have been international agreement on the need end the war.

Instead, the Syrian war is increasingly spilling across borders, with the Lebanese-based Hezbollah militia openly siding with the Syrian government by joining in the attack on the town of Qusair, Syria shelling the Israeli-occupied Golan Heights and Jordan in particular buckling under the weight of more than 400,000 refugees.

The Syrian government’s attack on Qusair, near the border with northern Lebanon, is reported to be the heaviest artillery assault of the war. Anti-Assad regime forces still hold the town but are struggling, and its loss will put further pressure on the nearby hold-out city of Homs, also the scene of heavy fighting between Syria’s opposing forces.

Should Qusair fall, it will open a route for the Syrian regime between Damascus in the south and the sea ports at Al Hamidiyah and the Russian-based Tartus. The heavy fighting follows President Bashar al-Assad taking a hard line on the possibility of ending the civil war in an interview last weekend.

The fighting also follows the reporting drying up of weapons supplies to the anti-Assad forces. The reduced flow of weapons is a result of increasing concerns that they could fall into the hands of the al-Qaeda-affiliated Al Nusra Brigade and aligned factions, as well as as result of reports of atrocities on the part of both pro and anti-Assad forces.

Assad has said he will not negotiate with “terrorists”, meaning forces arrayed against his regime, and says he plans to stand for “re-election” in 2014. Assad’s statement came a day after the US criticised Russia for supplying rockets to Syrian government forces.

Russia’s supply of the rockets was in apparent contradiction of the agreement between Russian Foreign Minister Sergei Lavrov and US Secretary of State John Kerry early in May, to push for a Syria peace conference in June. One reading of Russia’s position is that it will support peace talks in June, but only if it can strengthen the hand of the Assad regime ahead of such negotiations.

At this stage, however, Assad is not indicating that he will participate. Anti-Assad forces, meanwhile, see his resignation as a key condition for the talks to succeed. France has also said it will boycott the talks if Assad ally Iran is invited to participate in the talks process, which Russia is insisting upon.

With the anti-Assad forces now clearly divided between the Free Syrian Army and the al-Qaeda affiliates and Western support wavering, Assad and his Russian and Iranian backers are feeling increasingly confident of turning the tide in the war. It may be, however, that this is but another twist in an increasingly complicated, bitter and prolonged war.

The Australian Govt clearly isn’t yet sufficiently scared of refugees. They could speak out against the creation of a whole new refugee flow from Syria. But even so they dare not call out NATO on their sponsorship of the foreign forces aligned to Al Qaeda laying waste to Syria.

Maybe they could organise a refugee swap in advance with the terrorism sponsors – starting with the US, UK, France, Saudi Arabia, Qatar and Turkey.

There are other reasons why the prospects for peace in Syria may be fading. These include, but are not limited to, the expressed intention by both the French and British governments to increase the flow of arms to the people Dr Assad rightly calls terrorists.

Another reason is the illegal attacks by the Israeli Air Force on Syrian territory, and the recent news that Israeli special forces are also operating in Syria. Why is Dr Kingsbury so reluctant to deal with the elephant in the room, namely, continuing Israeli aggression.

About six years ago Seymour Hersh pointed out in an article in the New Yorker, entitled The Redirection, just what the US and its Israeli ally had in mind for the Middle East. The truth of that article is being played out on a daily basis. I don’t expect the mainstream media to discuss these issues, but one expects more of Crikey.

The conflict would stop tomorrow if Qatar, Saudi & Bahrain stopped funding the jihadists & ex muhjadeen (Salafist & Wahabi) – which they would, instantly if the Hegemon were inclined to so order.
Reminds me of its support for the Khmer Rouge regime purely to punish Vietnam – this is intended to put Iran off balance.