Eurovision, but English is the language of pop music

The first real post-austerity Eurovision may have been heavy on backing singers in black and light on pyrotechnics, but it still had most of the pageantry and passion we’ve come to expect. With the eurozone banking collapse and the rise of the eurosceptics, as well as the continuing strength of central Asian entries like Azerbaijan, the very fabric […] 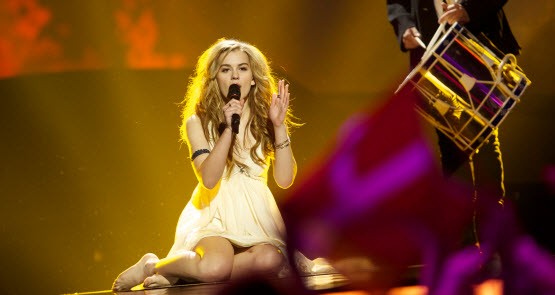 The first real post-austerity Eurovision may have been heavy on backing singers in black and light on pyrotechnics, but it still had most of the pageantry and passion we’ve come to expect.

With the eurozone banking collapse and the rise of the eurosceptics, as well as the continuing strength of central Asian entries like Azerbaijan, the very fabric and identity of Europe could be under threat. While many like to judge Eurovision song contest entries on the dance moves, technical effects or general shirtlessness of the participants (some strange people even like to base their opinion on the quality of the songs), I like to keep an ear on what languages get belted out at the final. The final, held in Sweden at the weekend, provided more food for thought.

It’s almost too dull to point out that English is the dominant language of pop in Europe. This year was actually a rather strong year for national-language entries in the grand final — eight of the 26 choosing to sing in a language other than English. Of course Spain, France and Italy all had entries in their national language. More interestingly so did Estonia and Hungary — neither Hungarian or Estonian have an international pop market, but they are both languages that are very distinct from their neighbours, so perhaps there is an element of national pride there.

Moldova again chose a national-language song — and I learnt Moldovan is a dialect of Romanian, proving the educational worth of Eurovision. Also, when you look as much like a viking as Eythor Ingi does, it only makes sense that you sing in your native Icelandic.

Greece was the only country to use the strategy of having a song in the national language, but resorting to English in the chorus for general crossover appeal. This was a popular strategy last year, and with the lyrics of the chorus consisting of “alcohol is free” (repeat), was this sponsored by the Greek tourism board? Three of the eight non-English songs made it into the top 10 (Greece sixth, Italy seventh, Hungary 10th), indicating it’s still possible to make it into the top 10 without English.

There was a disappointing lack of minority language representation this year, after the memorable Udmurt singers from Russia last year, and France’s Corsican entry in 2011. It appears the risk of the exotic entrant may only be a luxury for more prosperous times.

Of course, when it comes to Eurovision, the singing is only half the fun. On language politics, the voting gives a whole new perspective. Of the 39 countries participating in the voting, all but three chose to give their votes in English; Belgium, France and Switzerland all showed Francophone pride. While English and French may be the two official language of Eurovision, it’s clear English is not just the international language of pop, but of media more generally.

Interestingly, host Petra showed her multilingual flare by greeting the voters from several countries in their home language. Pleasantries in Italian, Spanish, French and German from our Swedish host (correlating with those countries’ general preference for singing in their national language) shows there is still cache in the eurozone for speaking the “classy” western European languages. More encouragingly, hosts from Israel, Estonia and FYR Macedonia all gave extended thanks to the host country in Swedish — showing some acknowledgement of the national language. I also give props to Slovenia and Croatia for giving their thanks in their own languages (before switching to English to give their results).

In 2014 Eurovision heads across the border to Denmark, after Danish singer Emmelie de Forest won the latest competition with her tune Only Teardrops. Despite the supposed threat from eastern Europe, it appears the Scandinavians are working their English pop nous and shaggy hair too well to be stopped.