Keeping it in the family. Which man, who represents a small state or territory government in court, has “left himself open to claims of nepotism” after hiring another man who is a close relation and pal? We hear some people talking …

Half serve of Lee Lin Chin? SBS announced on Tuesday that former Channel Ten news boss Jim Carroll will replace Paul Cutler as head of news and current affairs at the multicultural broadcaster. Now there are whispers in the halls of SBS’s Artarmon HQ in Sydney that World News Australia will be shortened from 60 minutes to half an hour. Apparently the back end of the program — the sport — isn’t doing well in the ratings and Carroll is said to be a fan of shorter format. Times certainly are a-changing at SBS, with chief producer Bernard Bradney and supervising producer Sally Watson both joining Cutler in heading for the exit door.

Still the Voice. We heard a rumour that “whispering Jack” John Farnham might be unwell. Alarmed, we got straight onto long-time Farnham manager Glenn Wheatley, who assured us The Voice was “fit as a mallee bull”. Farnham is presently enjoying a safari in Africa with his family (he’s a keen photographer, Wheatley says). And keep your eyes out for a Farnham tour — described by Wheatley as “something monstrous” — next year.

For his part, Wheatley, who served time in prison for tax fraud five years ago (a period he described to Crikey as “a sojourn out of the market”), is excited about his return to regional radio on Queensland’s Sunshine Coast. Though he’d love to be on safari too.

Dirty tricks from Coke? You might remember this banned Greenpeace ad, which draws attention to Coca-Cola’s tireless work to sabotage the NT recycling scheme (Coke won, here’s our story on the case). It’s a great ad — watch it here — and it’s been approved by Free TV, but Channels 9, 7 and SBS have refused to air it.

Now Greenpeace reckons “to compound the media blackout, Coca-Cola has further attempted to control the debate by purchasing nearly every conceivable Google Ad Word relating to recycling and cash for containers. It seems the beverage giant has even gone so far as purchasing the search term ‘Greenpeace’.” We’ve put that claim to Coke. Anyone know how we can check it? IT sleuths, email us here …

Flower power. Yesterday we brought you the scandalous tip that ABC’s The Drum had advertised an upcoming appearance from “Finance Minister Pansy Wong”. Here’s the evidence, courtesy of devoted reader Dave and with a delightful Tim Wilson backdrop: 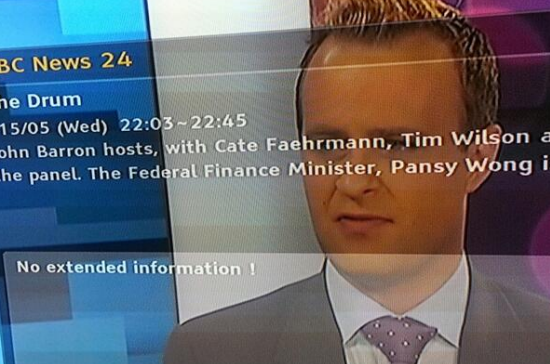 And we heard from plenty of Tips readers who pointed out that Pansy Wong is not a figment of The Drum’s imagination — she is an ex-New Zealand MP and ex-minister for ethnic affairs, among other things. This is not the first time the media has got the two confused:

SBS could have a half hour news but drop all sport. What a blessed relief that would be.