The PR war over wind turbines on King Island is heating up as professional operatives jump on board. Ben Haslem and John Wells are backing the No TasWind Farm Group to run the project off the island.

Two blue-chip Sydney PR operatives that represented the Exclusive Brethren, Scientology and James Hardie have sailed into a bitter fight over a $2 billion wind farm development on King Island.

Wells Haslem — the firm spun out of Jackson Wells last year by its principals, former Australian press gallery reporter Ben Haslem and ex-John Howard staffer John Wells — is supporting the No TasWind Farm Group in the sleepy Bass Strait community to scuttle a planned 200-turbine, 600-megawatt facility planned by Hydro Tasmania. Cashed-up pastoralists drafted in Haslem over concerns their multimillion-dollar properties would dive in value if the project proceeds.

The island’s 1400 residents are currently being polled over the plans and a “TasWind Consultative Committee” has been set up to oversee the process. If 60% of respondents are found to be in favour, Hydro Tasmania will launch a fully fledged feasibility study.

A spokesman for Friends of the Earth, Leigh Ewbank, says by engaging Wells Haslem, “the anti-wind farm movement has shown its true colours that it is not a ‘grassroots’ movement, but rather an ‘astro-turf’ campaign backed by wealthy donors”.

Trailblazing local publication the King Island Courier carried an account this week of a recent No TasWind meeting that discussed the PR strategy to defeat the project. Local resident Julie Arnold wrote to the paper saying a mail-out and personal contact campaign would aim to “amuse then scare” the community.

Haslem denied issuing the edict when contacted by Crikey, but confirmed he had been “asked to assist” with the campaign, which “is rolling out at the moment”. He says he wasn’t physically at the meeting and the account was “wrong”. However, an observer who has recorded audio of the plans told Crikey scare tactics were openly discussed: “The first communication piece was going to amuse people … and then they were going to ‘wobble’ the doubters.”

The first set of PR fliers hit mailboxes on the island this week urging residents not to “kill the golden goose”. A range of softer tourism alternatives to the wind farm were floated like bird watching and golf:

“In a rapidly developing world, people yearn to escape to the natural world … Let Hydro Tasmania know: we don’t need a feasibility study to tell us a giant wind farm would destroy King Island’s bright future.” 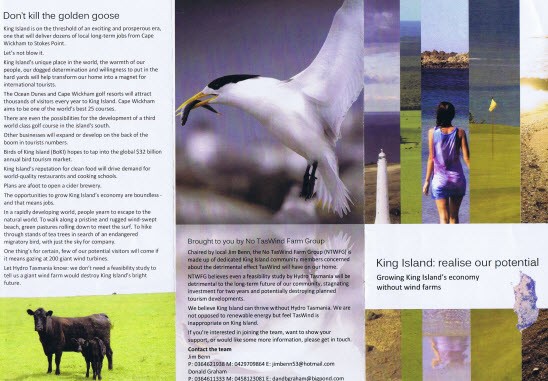 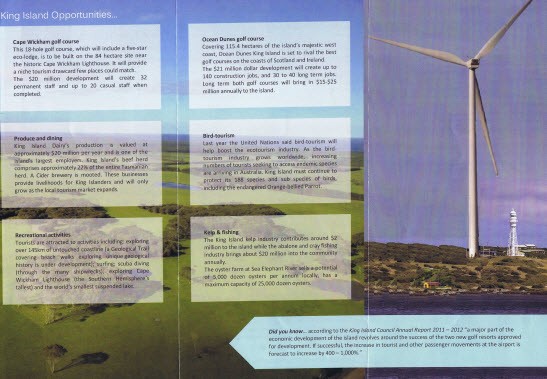 UPDATE, Monday 4PM: Wells Haslem have uploaded a campaign website in the name of the No Tas Wind Farm Group at ntwfg.org. An IP lookup reveals that the site was registered by Wells Haslem founding partner Alexandra Mayhew last week. It provides Wells Haslem’s Neutral Bay postal address as a contact and says Mayhew is the site’s administrator:

NoTas Wind deputy Donald Graham confirmed to Crikey Haslem’s advice is “very expensive … but we have our assets to protect”. He disputed the account of the strategy meeting reported in the King Island Courier.

Graham’s group recently engaged well-known anti-wind farm activist Sarah Laurie to present on the health impacts she attributes to wind farms. Crikey reported last month that Laurie is being examined by the national peak body for medical research over claims she breached ethical codes of research conduct. The National Health and Medical Research Council confirmed it had received a complaint over Laurie’s research used by anti-wind groups to campaign against turbines.

University of Sydney health professor Simon Chapman has also weighed into the debate, describing “scare tactics” as having the potential to cause a “nocebo” effect among locals. Ratcheting up fear and stress may produce “communicated health problems” as symptoms that get confused with the health impacts of the turbines themselves.

Assured income and clean energy from turbines to back up your variable agriculture income. With a caveats on ensuring no adverse impact on bird colonies sounds like a massive win that only an idiot would reject.

Oh dear, sounds like we will just have to go back to the dark ages of coal and the threat of nuclear winters.
Two choices folks:
Clean energy and its attendant unsightliness.
or
Bomb all those third world countries into oblivion and revegetate them, that way we can continue to pollute for another few hundred years.
(Just about to have one of these wind farms built near us after 10 years of planning and the ill considered outcry from a few is ridiculous. Apparently the infrasound will give me nightmares AND cancer. Trouble is I have lived right under one in France without any problem and no peer reviewed study has shown otherwise.)

So this was cooked up in a PR workshop?

Worry not, boys and girls. A few billion dollars for the turbines and anciliaries, plus another for an undersea cable, all to harvest about 600MW half of the year.

The current average wholesale price for power in the NEM has stuck at $50/MWh for the past several years.

Will a total gross income of $120M pay the interest, maintenance and operating costs on $3B with enough left over for the shareholders’ dividends?

Hold on! There’s only $120 coming in! We are $70M down the tubes in Year One and worse thereafter.

No wind farm, without about a billion dollars of government support.

What’s with the Swiss phone number (in a discontinued area code) for the Neutral Bay law firm? Is it some kind of pun?