If you want to know a man's political persuasion, ask him how much he can bench. Plus other political views along the way.

The reason why Tony Abbott is a conservative fellow and Kevin Rudd is not? From Aarhus University in Denmark comes the research finding that strong men are more likely to be right-wing while weedier specimens tend to have more liberal views. Details of the research are behind the Psychological Science Journal paywall, but Michael Bang Petersen, who led the study, has described its findings to London’s Daily Telegraph.

Researchers found that men’s opinions on redistribution of wealth could be predicted by their upper body strength, with powerful men more likely to take a conservative stance of protecting their own interests. In contrast, men who were just as wealthy but were of a flimsier build were less opposed to policies which would involve surrendering some of their wealth to society.

“The scientists … analysed the wealth, bicep size and views on economic redistribution of hundreds of men in America, Denmark and Argentina. …

“Michael Bang Petersen … said that overall stronger men took a more self-interested position but their stance varied depending on their strength.

“He explained: ‘Our results demonstrate that physically weak males are more reluctant than physically strong males to assert their self-interest — just as if disputes over national policies were a matter of direct physical confrontation among small numbers of individuals, rather than abstract electoral dynamics among millions.’

“There was no link between upper body strength and political attitudes among women, which is most likely due to the face women had less motive for physical aggression earlier on in our evolutionary history, he added.”

A slight improvement predicted. The participants in our little survey of what impact this week’s budget will have on public opinion as measured by Essential Research suggests that there will be little change from last Monday’s finding of Labor attracting 45% of the two-party vote to the Coalition’s 55%. There’s a slight leaning towards an improvement rather than a decline in the Labor share. 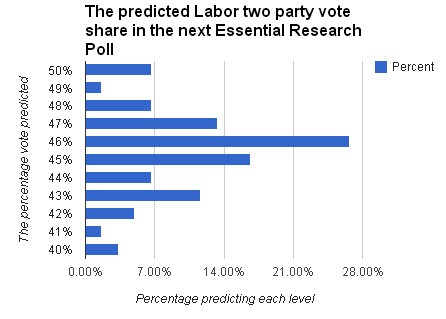 You can still  make your prediction about what the Essential Research finding will be.

Killer bugs waging biological warfare. Yesterday I brought you news of the lethal frogs carrying the killer chytrid fungus to destroy amphibian populations around the world. Today comes a report of the killer Asian ladybird bugs wreaking havoc across Europe and the USA. As told by the BBC the story has obvious parallels with the invasion in Australia of the dreaded cane toad for the Asian ladybird, Harmonia axyridis, was originally brought in to control aphids in greenhouses. Capable of devouring over two hundred aphids a day, the ladybirds were seen as a natural and effective solution to the problems posed by these pests. But in recent years these imports have escaped and rapidly established themselves across Europe and North America at the expense of native species.

“The most powerful aspects of the ladybird’s biological armoury are tiny fungi called microsporidia. ‘They keep them inactive in their own blood, we don’t understand how they do it yet,’ said Dr Heiko Vogel from the Max Planck Institute for Chemical Ecology. ‘But when the other ladybird beetles start to attack the invader’s eggs and larvae, they become active and kill the native ones.'”

And now for the really frightening news. When the Asian ladybird runs out of aphids it turns its attention to grapes, where its powerful, defensive chemicals can affect the taste of wine if they get trapped in the production process.

“‘They go on apples and grapes and that is becoming an increasing problem because of the massive amounts of these beetles,’ said Dr Vogel. ‘The tainting of the wine with a single beetle is not funny!'”