Do we need a local version of The Daily Show or The Colbert Report? That and other media tidbits.

An Aussie Colbert? Look around. Wake up and watch your own TV channel, Mark Scott! Instead of thought-bubbling about The Colbert Report and The Daily Show as possible models for “youth-focused current affairs”, Scott ought to look around him and check what his organisation is doing. In their various guises and formats The Chaser team has been dishing up exactly what Scott says he wants for years now. The most recent iteration was The Hamster Wheel, which got better as it went along. Who gave us the classic send-up of “security” at John Howard’s 2007 APEC meeting? Not Four Corners or 7.30; it was The Chaser.

This year a couple of the Chasers have given us the most interesting new program on Australian TV: consumer affairs show The Checkout. Another program that springs to mind is Hungry Beast, the program from the former Zapruder’s Other Films when Andrew Denton and Anita Jacoby were in charge. So does Sean Micallef’s Mad as Hell. Then there’s Gruen Transfer, Gruen Nation and Gruen Planet. Fronted by comedian Wil Anderson, these programs broke new ground in Australian TV and couldn’t have been done by a commercial network (nor could The Checkout).

Last night the ABC debuted a new idea in Dirty Laundry with Lawrence Mooney and Brooke Satchwell. It was a good attempt — and it is different. On ABC2 at 7.30pm Monday to Thursday The Roast is a modest attempt at current affairs satire. It’s making a good fist of a difficult subject and could do with more money thrown at it. — Glenn Dyer

Pants on fire. Fact-checking website PolitiFact Australia launched on Monday, and was quickly criticised for awarding Labor a “mostly false” rating for claiming that penalty rates cannot be stripped away. The site today awards its first “pants on fire” verdict to Liberal MP Jamie Briggs for claiming federal public servants are purchasing “gold-plated” coffee machines (they cost around $15,000).

Briggs’ defence that the phrase is a figure of speech didn’t wash with the PolitiFact team who ruled “there should be some form of modifier, a marker, when referring to gold-plating to ensure everyone knows it is not real gold”. Not all readers have agreed with this decision either; luckily editor-in-chief Peter Fray knows fact-checking doesn’t win you friends. — Matthew Knott

Seeing double at The Tele. The Daily Telegraph was so taken with this (admittedly tragic) story they ran it twice today:

Video of the day. In a pre-recorded speech to the Australian Mines and Metals Association this morning, mining magnate Gina Rinehart warned that the Australian resources industry should not be used as an ATM. “Let’s not be too proud to admit that we’re really just a large island with a small population with record debt,” Rinehart said. Aussie Aussie Aussie. Oi Oi Oi! 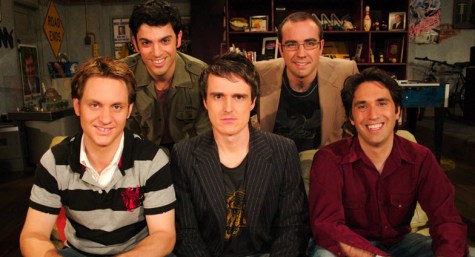 I never thought I would see a film clip of a talking cane toad.

Our Australian minerals are an ATM for Gina Rhino.