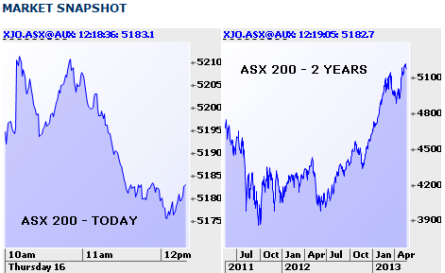 The market is down 9. Futures were up 2. Dow Jones finished up 60 on above-average volumes. The Dow was up 86 at best and down 40 at worst.

The Eurozone GDP was -0.2% for the March quarter, posting its sixth successive quarterly contraction. Annual GDP growth reached a new low of 1.0%.

“Coffee International (COF) — Shares are up 25% after issuing a profit downgrade on Monday, share price fell 56.52%.”

Really Marcus? COFFEE International down? Given the amount of it they drink around here, I find that hard to believe. COFFEY perhaps?