The Convo goes global. The good news keeps coming for The Conversation — the website, led by former Age editor-in-chief Andrew Jaspan, featuring news and anlysis from academics. Two days after receiving tax deductability status and $2 million in federal government funding, the site has launched a UK version (Crikey told you it was coming in […]

The Convo goes global. The good news keeps coming for The Conversation — the website, led by former Age editor-in-chief Andrew Jaspan, featuring news and anlysis from academics. Two days after receiving tax deductability status and $2 million in federal government funding, the site has launched a UK version (Crikey told you it was coming in February).

The British site is chokkers with content and has an editorial team made up of Aussie expats (including Jonathan Este, a former media writer on The Australian) and British hacks — mainly ex-Guardian types. Jaspan sits at the top of the tree as editor-in-chief of both sites. Thirteen UK universities — including City Uni in London — have signed on as founding partners. — Matthew Knott

Exclusive watch. Memo to the editors at The Daily Telegraph and The Australian Financial Review: next time James Packer calls offering an “exclusive” story, check he hasn’t shopped it to someone else as well … 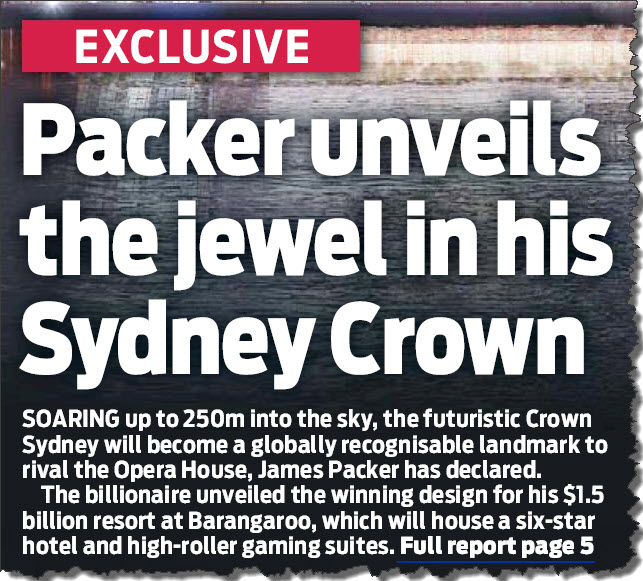 The Sydney Morning Herald — which Packer famously loathes — today notes that the NSW government has yet to grant Crown permission to build the complex.

News unveils paywalls. The Daily Telegraph and Herald Sun websites unveiled snazzy redesigns today to coincide with the launch of metered paywalls. Anyone but the most hardcore News nuts, however, needn’t worry about handing over any money for now. As Ninemsn’s Hal Crawford has pointed out, Tele readers will be able to read 80 articles a month for free in exchange for handing over some personal details; Hun readers get 65 articles a month. Popular site news.com.au will also remain free.

Genesis of magic pudding economics. Joe Hockey has described Wayne Swan’s budget as a “magic pudding”. It’s a reference, of course, to the eponymous 1918 Australian children’s book by Norman Lindsay, featuring Bunyip Bluegum, Bill Barnacle and Sam Sawnoff who are the owners of an anthropomorphic pudding that magically replenishes itself after being eaten. At one point in the story, the pudding saves the life of the Earl of Buncle and his niece, whom Sam Sawnoff had fallen in love with, but the Earl haughtily refuses to grant Sam his niece’s hand in marriage.

Embodying the fantasy of having your cake and eating it too, the magic pudding provides an apt and peculiarly Australian symbol for any overreaching political promises. In Lindsay’s immortal passage:

“A peculiar thing about the Puddin’ was that, though they had all had a great many slices off him, there was no sign of the place whence the slices had been cut.

“‘That’s where the Magic comes in,’ explained Bill. ‘The more you eats the more you gets. Cut-an’-come-again is his name, an’ cut, an’ come again, is his nature. Me an’ Sam has been eatin’ away at this Puddin’ for years, and there’s not a mark on him.'”

This is by no means the first time the metaphor has been served up in recent years. — Piers Kelly (read the full story at Fully (sic))

Front page of the day. One woman dominates global front pages today, even in Taiwan where the United Daily News focuses on how Angelina Jolie’s kids convinced her to have a double mastectomy to prevent cancer …