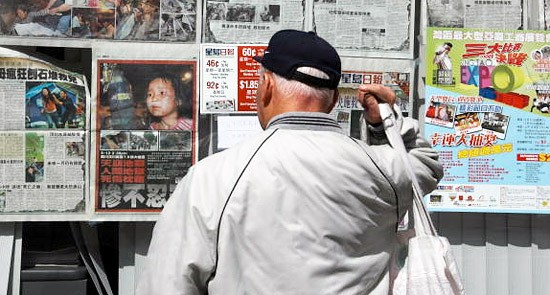 Australia’s Chinese-language Sing Tao newspaper may routinely steal articles from the internet and from Australian newspapers and magazines. Yet it has been congratulated by the New South Wales Parliament, and this year it won an industry award.

Sing Tao editor Vincent Ho recently admitted to the theft of a 2500-word feature article I wrote for The Sunday Telegraph. In a lengthy email conversation he said:

“It will [sic] be a shame if Australians who read only Chinese would not be able to enjoy this feature,” he explained, in response to my inquiries. “We have Taken the liberty of writing a Chinese write-up basing on your article [sic].”

Ho then refused to discuss the extent of his paper’s copyright looting, a practice that is difficult to monitor and has been hard to prove. Raymond Chow, publisher and editor of the Christian Chinese-language weekly magazine Sameway, says copyright theft is routine practice for Australia’s Chinese-language newspapers. “The Chinese newspapers here all do the same thing,” he said. “They take things from the internet and from Australian publications.”

Chow says that often the translation can be very poor, the product of either “machine” translation (such as the automatic translation aids provided by Google) or work by poorly paid and relatively inexpert translators. The meaning of the articles is often distorted.

As a publisher who pays journalists to produce articles, he’s been frustrated by this seemingly widespread practice of lifting articles from the internet and from Australian publications. “We have complained about this, about all the papers,” he said. “We are in a disadvantaged position. We need to employ people to write our articles. We complained to the ad agencies. We complained to the Press Council. We raised the alarm.”

So are Australia’s major news organisations actively pursuing this copyright theft by Chinese-language newspapers? A Fairfax spokesman declined to comment;  a News Ltd spokesman says the company is “actively working” on copyright protection but declines to say whether that includes legal action. “We do not condone plagiarism and have long advocated strengthening copyright law,” he said.

A former Australian news editor says he was often infuriated by Sing Tao‘s ongoing looting of work that had been time-consuming and expensive for his organisation to produce. Company lawyers sent “cease and desist” letters to Sing Tao, but the quiet stealing continued, and the theft was expensive to monitor on a regular basis and difficult to prove. Like so many other irritated editors, in the end he let it slide: it became too difficult and expensive to put an end to the hijacking.

In an era of concern regarding intellectual copyright, when most English-language publications in Australia are struggling to stay afloat, some industry observers were startled when Sing Tao was fulsomely praised by the NSW Parliament last year. Labor parliamentarian Shaoquett Moselmane’s motion “congratulates … all at Sing Tao Daily for their commitment to keeping the Australian Chinese community informed, and wishes the newspaper all the best for the next 30 years of service”. Sing Tao was also recognised in this year’s Premier’s Multicultural Media Awards, when CEO Simon Ko won a lifetime contribution award.

A multimillion-dollar global organisation based in Hong Kong, Sing Tao News Corporation has offices in four US cities, in Canada, the United Kingdom and Hong Kong, as well as in Melbourne and Sydney. According to its website it “boasts a range of Chinese-language and English-language paid and free products targeting local as well as overseas readers”. Ominously, the website notes:

“To fulfill the content needs of media operators and key industry players, primarily in the PRC (China), the Group sells and distributes repackaged information and content created by its different media businesses as well as third party content providers.”

It seems the Sing Tao group has a double set of standards on copyright theft. In 2008, a forum on the Asian Fanatics website published this note:

“We’ve just received a letter from singtao [sic] requesting us not to post images and content from singtao daily. Content includes translations. Therefore, all existing news (including translations) and pics from these sites are deleted.”

I sympathize, but until the Sunday Telegraph itself publishes a Chinese language edition, it’s going to continue. Just an electronic edition would do, you don’t have to have a dead-Ent edition.

Typical Chinese business under the guise of “oh so sorry”

This is typical in design & Innovation. Part of the ‘philosophy’ which went into large scale hacking exposed recently is manipulation of trade relationships, gaining advantage through access to perhaps minor but unknown secrets. That is broadly similar to ripping off intellectual property: it is annoying but done large scale is costly.

A chinese company copying work without licencing it? Well I’m shocked! Now where did I leave my “genuine imitation” Rolex?