Abbott’s budget reply: yes, you can have substance without risk

This year has demonstrated that the Opposition can produce policy without too much risk. The budget reply is an opportunity to continue that. 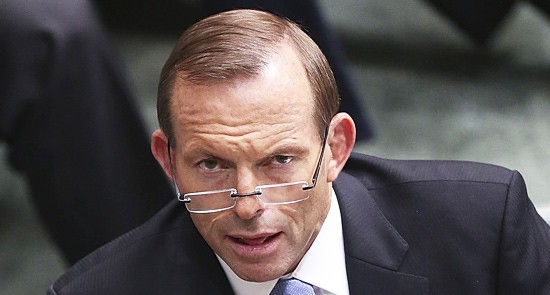 One of Labor’s strategies for this year, or hopes perhaps, was that by announcing the election date early, the opposition would be forced to bring its successful campaign of relentless negativity to an end and begin articulating its policies, giving Labor a larger target at which to aim and shifting the political conversation to policy, where Opposition Leader Tony Abbott is weakest.

Given Labor’s aim isn’t too flash, it wasn’t too bad a strategy.

And it worked to an extent: whereas 2012 was primarily occupied with claims about Peter Slipper and Craig Thomson, and a campaign by News Ltd, a Fairfax journalist and Media Watch to smear the Prime Minister over decades-old non-allegations, this year has been nothing but policy, particularly — but not only–  fiscal policy. And the Opposition has played along, producing a broadband policy and an IR policy.

The net result has been that Abbott has improved his (awful) standing with voters and the Coalition has maintained its massive polling lead. If anything, the shift in focus to policy has actually helped Abbott.

That’s not to say he hasn’t struggled. His own side has taken to kicking his paid parental leave policy, the sheer stupidity of opposition climate spokesman Greg Hunt’s “direct action” policy is becoming clearer to all, and business and party elders like Peter Reith are unhappy about Abbott’s moderate IR reform agenda. You still get the impression Abbott would prefer to be sinking the slipper into the government rather than articulating his own vision of what his government would seek to achieve.

Even so, there’s more reason than normal for the Opposition’s formal budget response, which commences tonight with Abbott’s reply and continues next week with shadow treasurer Joe Hockey’s reply, to contain some substance, particularly given the extensive “savings” — more than $30 billion, not including the NDIS levy — put forward by the government.

It’s one of the budget rituals for the government — any government — to lambast the opposition — any opposition — over failing to meet some impossibly high bar for budget replies. (In days of yore, after the opposition leader’s reply, there was a reply to the reply from the government, in which a middle-ranking minister would rise and criticise the reply, which inevitably of course had been critical, in the manner of the Blackadder anecdote about the pooh-pooh being pooh-poohed.) But for a decade budget replies have been declining into just another set-piece speech by the opposition leader, 30 minutes of airtime to berate the government, rather than an opportunity to articulate an alternative economic strategy or fiscal plan.

We don’t know much about the Opposition’s economic strategy. There’s a multi-point plan, and various pillars, and lots of motherhood, the sort of materials all politicians like to explain strategies with, but not much beyond that. From what we’ve been able to work out, the Opposition’s fiscal strategy might be a little tighter than Labor’s, but won’t embrace austerity. The rest is hopes and dreams — Hockey wants to end the age of entitlement; Abbott “aspires” to tax cuts and spending increases in areas like defence. A first step might be for Abbott and Hockey thus to drop the good-cop-bad-cop/Hawke-and-Keating/Howard-and-Costello act and resolve the implicit tension between Abbott’s “free money for everyone” and Hockey’s slash-and-burn approaches. This would involve indicating whether it supports the savings and tax rises identified by Labor, and perhaps indicating how much more savings the Coalition is targeting over forward estimates.

That’s not much, but it would a start in getting a clearer understanding of how the Opposition will address the sustainability of fiscal policy.

Good morning, early birds. Bill Shorten has his say on the 2018 federal budget. Plus, yet another Liberal MP breaks ranks to back a ban on live exports. It's the news you need to know, with Chris Woods.

Bill Shorten has delivered his budget reply, with the Prime Minister set to head to Yarralumla to launch the 2016 election within days.

Christine Milne has reiterated her commitment to moving the economic focus to households and quality of life in her budget reply.

“We don’t know much about the Opposition’s economic strategy.”

Understatement of the century.

Abbott has already said he won’t be saying anything.

I’m not expecting a whole lot of detail from Abbott/Hockey or scrutiny by the MSM. Despite all that’s good about this country we are all pretty good at doing mushroom impressions.

policy? you mean their template “policy” of “we aspire to do something awesome but we can’t tell you what it is because ZOMG LABOR WASTE we’ll tell you after the election just vote for us it’s going to be awesome trust us”