Forecasts: how wrong will Treasury get it this year?

Treasury always gets it wrong -- but is the margin of error acceptable? History shows it has a variable record, and suggests what Wayne Swan's deficit might end up being.

If Treasury secretary Martin Parkinson was present yesterday in the budget lock-up, he was kept well hidden. Former treasurer Peter Costello and his department were famously at each other’s necks, but the relationship between the current Treasurer and his chief bean counter has been surprisingly solid throughout Labor’s time in office.

As Stephen Mayne never got tired of documenting, the public service has a variable record in predicting budget surpluses or deficits, as can be seen in this table. The figures are revised every year, but this is based on the historical underlying cash balance in this year’s budget papers. 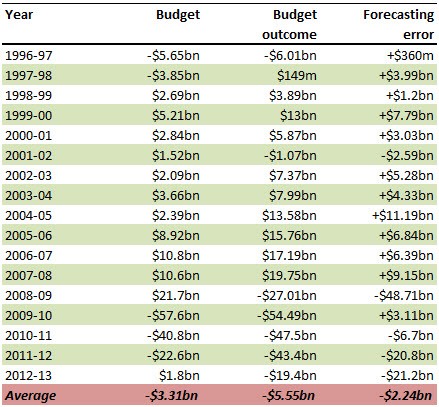 The tale of the last six years is a curious one. Where once Treasury consistently undercooked the outcome by about $5 billion, the 2008-09 global financial crisis — when the department overcooked the outcome by a massive $48.71 billion –means that on average over the 17 years since the start of the Howard government Treasury is now erring to the upside by $2.24 billion. If it continues that form, Swan’s $18 billion deficit prediction for 2013-14 will actually come in at $20.24 billion.

But strip 2008-09 out of the series and a somewhat different story emerges. Treasury, on average, undercooks the non GFC years by some $800 million — an amount conservative accountants would wholly endorse. And it’s really not that much in the context of a total budget now approaching $400 billion.

How about getting Tom Waterhouse to do the forecasts, he’s supposedly good at numbers.

Given that the Treasurer of the day gets all the blame for missed forecasts (especially if the outcome is worse than forecast,)I would think Treasury heads should roll if they can’t do considerably better than 2011-12 and this current year. It’s simply not good enough. On the other hand, I don’t know if Treasury presents the Treasurer with a choice of outcomes (Optimistic, Pessimistic etc.)If they do and the Treasurer chooses Optimistic, then he deserves all the criticism.

Why not introduce worst case scenario planning for all future budget forecasts (or at least while the global economy is in a dire state). At least that way we can be sure that all published revenue targets and forecasts err on the side of (extreme) caution.

Or even better yet why not make Treasury forecasts independent from the Government of the day and let it set the forecast with the unbiased approach that interest rates are set.