Budget delivered on the wings of the dollar 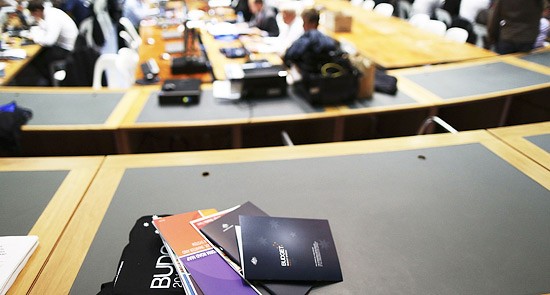 Having been continually embarrassed by what have turned out to be optimistic forecasts for government revenue and therefore the return to surplus, this could well be the budget that Treasury has swallowed a chill pill and erred on the conservative side with its economic forecasts.

It seems to be setting the scene for a pleasant surprise sometime down the track when it turns out that economic growth and government revenue are likely to be higher than it is currently projecting.

Aside from this apparent conservatism, the forecasts could already be out of date. In table 1 of Budget Statement 2, Treasury makes the “technical assumption” that the Australian dollar will remain around $US1.03 and 78 cents on a trade weighted basis.

As Treasurer Wayne Swan was preparing to deliver his budget speech, the Aussie dollar was already trading around 3% lower than this, at a little under $1.00. While this is not enough of a move to make a huge change to the budget forecasts, it is a step in the right direction as far as economic growth, inflation and the budget bottom line are concerned. Another 4-5 cents lower for the Aussie dollar from here and there will indeed be a noticeable impact on the bottom line.

And this is especially the case earlier in Budget Statement 2, which outlined the quite sharp and unusual divergence between the terms of trade and the level of the Australian dollar. The inference is clearly that the dollar is overvalued, perhaps by 10%, which presumably means there will be some upside to growth and revenue in the period ahead if — or rather, when — the Australian dollar falls back towards fair value.

The starting point for Treasury’s new-found conservatism is a forecast for real GDP growth of just 2.75% in 2013-14 and then only a moderate uptick to 3% in 2014-15. The forecasts that matter more for revenue, nominal GDP growth, are similarly subdued with 5% growth forecast for each year.

Both these forecasts are close to the consensus and are similar to those included in the recent Reserve Bank Statement on Monetary Policy, but they could easily be a quarter of a percentage point higher in both 2013-14 and 2014-15 for both nominal and real GDP.

Certainly the recent employment data points to the economy growing a little faster than the 2.75% assumed by Treasury.

While 0.25% extra on GDP growth doesn’t sound much, according to the sensitivity estimates, this amount of “extra” GDP parlays through the economic parameters (company profits, wages, employment and the like) and is worth close to $15 billion over the forward estimates, or around $3.5 billion a year.

It could well be the case that this conservative stance from Treasury, if it is in fact that, will be revealed in about three-and-a-half months — when the Pre-Election Fiscal Outlook is released by the Heads of Treasury and Finance 10 days before the writs for the September 14 election are issued. That will be on or about August 22.

While three-and-a-half months certainly isn’t long for revisions to be made to the big picture economic forecasts, and there are other risks that could impact in either direction on the economy, it is distinctly possible low interest rates and the lower Australian dollar could filter through in a way that sees Treasury revise up its GDP forecasts, even a bit, which would see a little bit more revenue flow in.

It probably would not have a big impact in 2013-14, but, importantly for the budget out-years, an extra $4 billion dollars per year in revenue simply from a stronger economy would be a welcome change from the backtracking that has dogged Treasury over the past few years.

The final outcome for the 2013-14 budget has little to do with a long-departed Treasurer but may yet echo through Joe Hockey's future budgets, Bernard Keane and Glenn Dyer write.

New estimates of the structural budget balance sit poorly with opposition claims about the Gillard government's poor fiscal mismanagement. Turns out things might not be so bad after all ...

The Treasury Secretary's discussion of what has gone wrong with revenue forecasting in recent years provides a context for the coming challenges on fiscal policy. Bernard Keane and Glenn Dyer report.

You can guarantee he won’t tighten the screws on middle class welfare.

In the loacal paper we had a couiple on $130K ( tow priomary age kids) complaining ethey weren’t getting anything.

Are they for real!!

Apart frrom FTB A & B there’s the schools payemnt then the new fundsing for scholls which they ( their kids)will benefit from over the coming years.

Frankly I despair over the entitlement mentality Howard created.

Pav: “You can guarantee he won’t tighten the screws on middle class welfare”

Did you really mean to say that?

Because Abbott just today in interviews said that the thought the middle class was being unfairly targeted. And clearly his absurdly generous PPL scheme is a champagne benefit to the middle and upper-middle classes.
………………..
On separate issue, re SK’s head to head with Judith Sloan on Lateline last week:
Koukoulas: 1; Sloan: 0