No lady in red. Which Labor candidate for a federal seat in Queensland is “causing issues as she will not campaign weekends, or wear the colour red”? La di da! But she’s not the only candidate to be a bit of a diva (or divo). If you know of any high-handed behaviour from candidates, tell Tips.

Budget banquet … Journalists will be imprisoned in a Canberra cavern this afternoon for the weird, annual budget lock-up. One of the few redeeming features of the lock-up is the sausage rolls and sandwiches the bosses buy for their minions to while away the six-hour session (some reporters have been known to desperately sneak a fan in the toilets). We hear the good folks at AAP are going one better: 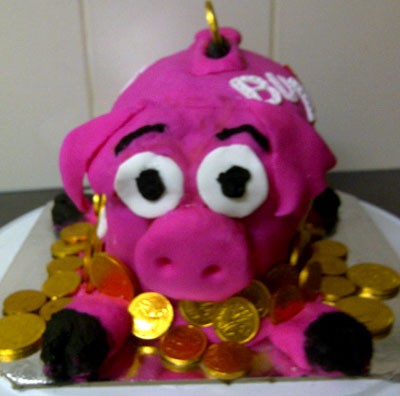 “AAP press gallery reporters will be munching on a piggy bank-shaped cake during the budget lock-up on Tuesday afternoon. The caramel mud cake, by Lisa Martin, follows her dollar sign-shaped cake last budget.”

Crikey will bring you all the colour from the lock-up in our evening edition today. We’ll keep our eyes peeled for lock-up shenanigans (and for mishaps at the traditional post-budget booze- up).

… and budget sighting. Wannabe deputy PM and Nationals leader Barnaby Joyce and current Nationals leader Warren Truss were spotted getting into a Comcar in West Row in Civic (that’s Canberra for you plebs) at 10pm last night. Truss got in the front, Barnaby in the back. Just like yesterday’s tip on Bill Shorten and Eric Abetz’ seating arrangements on Virgin, expect the order to flip sometime after September 14.

Parma special. Tips is concerned at Clive “make me PM” Palmer’s new political force being called the Palmer United Party, so we decided to help Clive by crowdsourcing a better name. Tips’ readers enjoyed the idea of the public being “sold a PUP,” but this was our favourite replacement name:

“I suggest calling it the Palmer Galah Ding Dong Party, which rings a bell, captures the essence of Palmerian politics and makes an iconic native Australian animal the party symbol.”

Our winning tipster even penned a theme song, which begins: “Oh oh oh oh / Let’s all vote for the Palmer Galah, Palmer Galah Ding Dong, It’s Titanic to me …”.