In China, landing on the rich list can land you in jail

Life can be tough being young and wealthy in China -- especially if you’re a descendant of Chairman Mao. And with exposure on the country's new rich lists it's getting tougher. 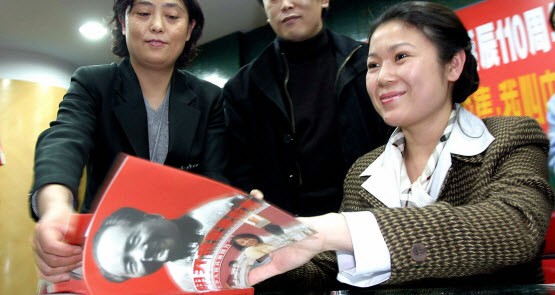 Some rich listers take pride in their fortune. Others are ambivalent about being singled out as among the world’s wealthiest. But few fear rich lists as much as members of China’s ruling elite do.

The nominally communist country still pays lip-service to equality. But it’s a land increasingly divided between rich and poor. Thanks to technology and the rise of Chinese blogging and social networking, this fact is increasingly impossible to hide.

This month, Chinese financial magazine New Fortune estimated the fortune of Kong Dongmei, along with husband Chen Dongsheng, to be worth some 5 billion yuan, or $815 million. The twist is that Kong is the granddaughter of Mao Zedong, the founding father of communist China. She runs a bookstore specialising in communist culture and has written four best-sellers about her grandfather (pictured signing a copy of one).

Mao himself is known to have ruled China in luxury. But during his day, that was largely obscured from the masses.

Not so for the third generation. Along with publishing the family’s wealth, New Fortune also wrote that Kong has three children, a violation of the one-child policy. Wealthy Chinese have in recent years been easily able to get around this law, although their poorer and less-connected countrymen are forced to abide by the rule.

Kong, it must be stated, married into wealth rather than inheriting it. Her husband, Chen, made his millions through running the country’s fourth-largest insurer long before the couple married in 2011. But Kong is still being accused of hypocrisy.

“The offspring of Chairman Mao, who led us to eradicate private ownership, married a capitalist and violated the family planning policy to give birth to three illegal children,” wrote Luo Chongmin. Luo is a government adviser in south-west China. His statement is typical of how many in China now view Kong.

She’s not the only Chinese millionaire to be put in difficult circumstances by having her wealth publicly known. In China, extreme wealth is increasingly common, but it remains dangerous. This isn’t just the case with wealth accumulated through business. It’s not uncommon for winners of lotteries in China to collect their winnings wearing masks. According to a China Daily poll, 91% of Chinese people think the rich got their wealth through political connections, and only 16% think it was partially achieved through merit.

“We also find that, after being included on the list, entrepreneurs are far more likely to be investigated, arrested and charged compared to other private entrepreneurs.”

This isn’t an unusual occurrence. Plenty of Chinese billionaires have been arrested in recent years. For example, Zhou Zengyi was once China’s 11th richest man, with a fortune of $320 million, according to Forbes in 2002. He’s since been arrested twice and is serving a 16-year sentence for bribery and embezzlement.

It’s always unclear whether these arrests are politically motivated, or whether the government is just doing its job and cracking down on white-collar crime. However, it’s clear China’s wealthiest only start being scrutinised once their fortune is published by some magazine or other.

For example, Zhou Zengyi was once China’s 11th richest man, with a fortune of $320 million, according to Forbes in 2002. He’s since been arrested twice and is serving a 16-year sentence for bribery and embezzlement.

It’s always unclear whether these arrests are politically motivated, or whether the government is just doing its job and cracking down on white-collar crime.

Interesting comments, so if the politics is OK it’s OK to rip off the proletariat? It only goesd to show that the Bernie Madoff’s of this world have an Asian flavour also. Whilst we wax lyrical about the Chinese economy the society has a dark underside. Just last weeks a report of 40 proletariat killed in riots in one city, plus 10 police! 1000+ pigs dumped in Shanghai’s drinking supply! Before we tie our fortunes to the Chinese check the facts, any society is only 3 meals from a revolution, and China has prior experience.