A ‘right to drink’ in Alice? Banned boozers register debate 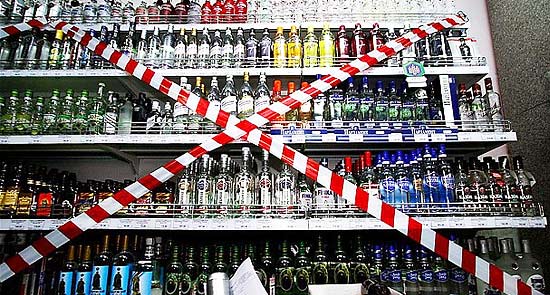 Loud music blares from the Riverside Bar at the back of the Todd Tavern as a security guard passes a metal-detection wand over each person seeking to enter. It’s 1.45 on a weekday afternoon in Alice Springs, and the bar has been open for nearly four hours.

Minutes later, the guard ushers out a jumble of people, all Aboriginal, who then congregate around the edges of the pub’s driveway as if waiting for a public event. By five to two, about eight vehicles are lined up in the driveway of the bottleshop. First in the queue are two eight-seater minibuses, full of Aboriginal people. “We accept BasicsCard,” a small green sign announces on the side of one of the vehicles. On the other side of the pub, Aboriginal people wave down taxicabs coming off Todd Causeway so they can buy grog from the drive-through bottleshop. Entry on foot is prohibited.

At two, the roller doors rattle up and the sales commence. The door of the Riverside Bar is locked, as the next shift selling cheap grog begins.

The Todd Tavern’s Riverside Bar and the Gap View Hotel’s side bar are probably the most notorious public expressions of problem drinking in Alice Springs. A hangover from the days of racially segregated drinking, the two “animal bars”, as locals call them, serve a crush of mainly Aboriginal drinkers excluded by the dress regulations and prices from the pubs’ main bars. Drinking at the animal bars begins at 10 am – they are the only places in town where alcohol is served this early – and continues until the small stampede to the bottleshop at 2pm.

The Gap View and Todd Tavern were the only two liquor outlets that refused to join the retailers’ accord signed in mid 2011 by Coles, Woolworths and the IGA supermarkets in Alice Springs to reduce harmful drinking in town. The accord introduced a floor price of $1.20 per standard drink for takeaway alcohol and removed casks, cleanskins and some fortified wines from the shelves.

Along with the Heavitree Gap Tavern, the two pubs did agree a couple of years ago to refuse entry to anyone on the Banned Drinkers Register, but business took a dive. Introduced in 2008 as part of the Alice Springs Alcohol Management Plan, which had been in operation since 2006, the BDR supported existing measures to reduce takeaway alcohol — 70% of alcohol sales in Alice Springs — by restricting the sale of wine in containers of more than two litres, and bottles of fortified wine, to one purchase per person per day between the hours of 6pm and 9pm. The BDR listed people who had been taken into police custody drunk and disorderly three times in three months or had committed an alcohol-related offence. Alcohol could be bought at takeaway outlets only after a driver’s licence or photo identification was scanned in order to check whether the buyer had exceeded his or her quota of alcohol products, or was on the BDR.

With 800 of central Australia’s drinkers listed on the register and unable to purchase alcohol, the impact on the animal bars was undoubtedly significant. “I was in those bars in September after the BDR was scrapped,” said Bob Durnan, a community development worker in central Australia for over 30 years, “and you’d ask the security blokes how many people had been on the BDR, and they would say, ‘oh yeah, 20, or 50, or lots of people’.”

In May 2011, as part of its “Enough Is Enough” alcohol reforms, the territory’s former Labor government extended the operation of the BDR beyond the alcohol management plans of Alice Springs, Gove and Groote Eylandt to include 2500 drinkers across the territory. Announcing the package, the Labor attorney-general, Delia Lawrie, acknowledged “alcohol is the biggest cause of crime in the territory, with 60% of all assaults and 67% of all domestic violence incidents involving alcohol, costing our community an estimated $642 million a year”. That figure represents $4197 for every adult territorian, almost four-and-a-half times the national figure of $944 per adult, and includes costs incurred by health and medical emergency services, police, the courts and corrective services, and loss of workplace productivity, but not the social cost of alcohol abuse’s contribution to intergenerational poverty and disadvantage.

Alcohol consumption in the Northern Territory, and in Alice Springs in particular, has long been notoriously high. In 2000, prior to the implementation of a series of alcohol management initiatives in Alice Springs, central Australians drank an average of 17.65 litres of pure alcohol per person each year, 1.76 times the national average. But by 2008, according to a study conducted last year by the National Drug Research Institute, that figure had decreased to an estimated 13.75 litres of pure alcohol per person, 1.25 times the national average, and alcohol-related assaults and hospital admissions had also fallen. The study attributed these trends to the effectiveness of price-related strategies in Alice Springs to reduce overall alcohol consumption by facilitating a switch from cask wine to beer.

The study also found that at least one of three other initiatives — enforcement of the “one per person per day” restriction, the introduction of ID cards, and the alcopops tax — had significant effects in reducing consumption, but the coincidence of these reforms made it hard to say which had been most effective. Nevertheless, the use of ID scans accompanying the BDR appeared to have reinforced measures to limit the quantity of specific alcohol products purchased by individuals each day.

Here is a (non-exhaustive) list of the Indigenous charities you should consider supporting if you are hoping to make a difference.

How do you refer to Aboriginal and Torres Strait Islanders? Unpicking the terminology around how Australia’s first people are reported in the media means navigating a minefield packed with political explosives.

Another way to genocide! Differing racial groups have differing metabolisms and differing enzyme production and are affected by alcohol consumption differently, serious ill health is caused to those of DNA structure that have NO capacity to metabolise alcohol and that is just the physical cost to that person. The societal and community cost is enormous. Ban it! and get REAL help for ALL those affected.

This BDR debate is the current NT equivalent of debating the best formation for NSW in the up coming Origin series. Not very helpful. The BDR did actually get a run and its effects were negligible, at best. It is a red herring. The real work of setting the scene for a new generation of Territorians to be smarter about grog is not being done and has less chance of ever being done if the debate centres on trivialities like the BDR. The BDR enthusiasts peddle anecodtal “evidence” and got really excited when some figures were leaked from the Alice Hospital showing the number of alcohol related admissions had increased from August 2012 (in BDR times) to January 2013 (post BDR). Of course no mention of the fact that in August Central Australia is freezing and grog use and violence is always off and by January it is broiling hot, Xmas / NY madness is upon us and people are taking increased risks. Seriously tackling grog abuse is well beyond the BDR and “raising floor prices” (blackmarketeers do that as of course and do it with handsome profits). Reducing grog use lies in a combination of education from the cradle and some serious limitations on sales, not the grog industry placating sops we get now.