Brisbane courts Paris ... Abetz and Shorten fly together, but who's up the back? ... Rupert Murdoch is sheepish ...

Oh la la, la vie en rose en la terre des reines. And a key reason to visit Brisbane is … Barack Obama? We got this from a tipster:

“We’re in Paris for a few days. I’ve notice these billboards all over town. They’re certainly catchy. Must admit they worked as I noticed the Obama photo before I noticed the ‘Brisbane’. Whether any Parisian would know, or care, where Brisbane was is a moot point. Is it worth the money?” 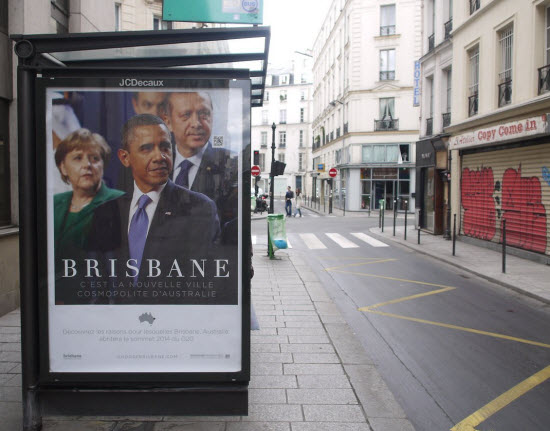 Dredging up Tips’ schoolgirl French, this says “Brisbane, it’s the new Australian cosmopolitan city. Discover the reasons for which Brisbane, Australia will hold the G20 summit in 2014.”

Now, given Campbell Newman’s penchant for slashing spending, sacking public servants, etc, this is an interesting spend of taxpayer dollars. And why have Obama’s face, when you could have “Cup a Soup” Newman glowering at the well-heeled Parisians? According to the website on the ad, it looks like the ad is funded by the Brisbane City Council. Maybe that’s why Newman’s face is nowhere to be seen.

Budget sightings. Industrial Relations Minister Bill Shorten and his opposite number Eric Abetz were spotted on a Virgin flight from Melbourne to Canberra this morning. All seemed civil aside from the fact Shorten was in 1A with Abetz cruelly consigned to row 2 directly behind him. Look for a seat reversal after September 14.

Clive hits another iceberg. Poor Clive Palmer’s quest to be PM has hit a snag — he’s had to rename his United Australia Party the Palmer United Party (due to various reasons we won’t bore you with).

Does this mean he agrees with himself? Crikey feels the party could have a better name — and we’re worried his party now sounds like some kind of a cheap pub meal (parmas are the $15 meal of choice). We’re not sure what would be in a parma united, but we might not vote for it. If you can think of a better name for the fledgling political force, email us.

Feeling sheepish, Rupert? Now, we’re the first to admit it’s easy to make a boo boo while sending a tweet on the go (Joe Hockey knows about this too), but this one made us smile. Did Rupert mean “news”? That’s baaaad typing from the chief of Ewes Limited.

All in the family: there really are loads of Australian political dynasties

Thanks to the One Nation factor, the Queensland election promises to be the most volatile and unpredictable in recent Australian history

On Mr Palmer and his five members – hitting a snag, I’m not backing the snag in that sort of encounter.

The more impressive part of the Murdoch tweet was his consternation re Bloomberg reporters ‘spying’. I’ll still be laughing in another couple hours.

Perhaps we should be kind and put it down to Murdoch experiencing memory loss.

While he’s looking for that he might find his scruples?

What about the “Billionaire Stunt Mining Party”? Not that funny, but has the disadvantage of being true.