News Corp has lost an average of more than $20 million a month for the last 21 months.

More bad News Corp results. The bleeding at News Corp’s Australian newspaper operations accelerated in the nine months to March 31 this year, according to the latest filing with US regulators. In fact when taken with the fall in the 2011-12 financial year to last June, the group has lost around half a billion dollars in the 21 months. No wonder Kim Williams, the CEO brought in to revamp the business, has been engaged in what has seemed back to back restructurings across the local arm of the Murdoch family’s media empire.

According to the filing lodged with the US Securities and Exchange Commission on Friday night (which will form the basis of the offer document sent to shareholders for the split late next month of News into a publishing and a video and film content arm), revenues at the News Ltd Australian papers dropped $US265 million in the nine months to March 31 this year. If currency movements are taken into account over the near two-year period, the amount is above the $US500 million mark.

The document reveals that revenue at the Australian papers fell by around $US225 million in the year to June 2012, taking the nominal total to $US490 million for the 21 months. That puts the monthly revenue loss at more than $US20 million for each of the 21 months — but that loss accelerated (jumping by 50%) to nearly $US30 million in the nine months to last March. No wonder much of the $US231 million of restructuring charges in the nine months was spent on the Australian newspaper business. — Glenn Dyer

TV week: networks reveal new shows. It’s that time again in the US when the big American TV networks, their producers, advertisers, stars, agents and other hangers-on all get together at the “Upfronts” in New York and LA to preview the offerings for the 2013-14 season. In the past couple of weeks there have been stories about cancellations, renewals, postponements, passes, etc, as the networks and the producers jockey for position. This is vital to the Australian TV networks as they visit Los Angeles for the network showings towards the end of this week and into next week.

The list of hits from last year’s showings for Australian networks is pretty thin – most of the well-known programs (such as Revenge and Modern Family) are older than the 2012-13 season. This list is not definitive, but it’s up to the weekend and based on reports on Deadline.com, TVLine, local networks and producers.

There will be more feedback from the Upfronts and the screenings. Seven will be hoping for more after its highly regarded Last Resort only lasted 13 episodes. Its other big US hope, Red Widow, has bitten the dust as well. Ten and Nine have basically ridden on the back of older hits (The Big Bang Theory is Nine’s biggest US hit for some years and continues that way). Nine’s The Following has faded to 9.30pm on Wednesdays and is no longer mainstream. Ten gained Elementary last year, which has been the Australian network’s biggest US hit of the past year (and one of the few hits from anywhere for the network). — Glenn Dyer (read the full story here)

“We’re not here to say all pollies are liars. That’d be wrong, and besides nothing is that simple. But we are hear to test the truth of what they say …” 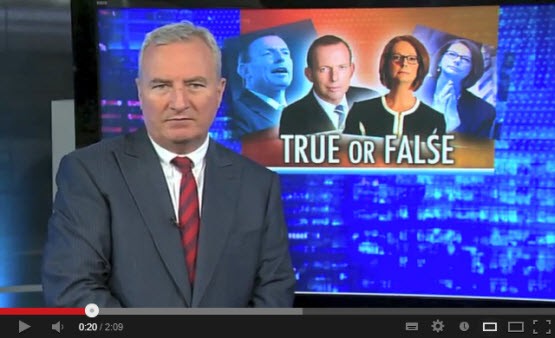 The project — which, as Crikey reported last month, is staffed by a team of journalists and will compete with a new ABC fact-checking unit — has already put four statements to the test, from Opposition Leader Tony Abbott’s claim that the carbon tax is adding $400 to the cost of cars (“mostly false”) to Prime Minister Julia Gillard’s statement that the Coalition’s broadband plan will cost $5000 for connection (“mostly false”). But is it just us, or is the “Truth-o-meter” a little, err, phallic? Maybe it’s just us …

When producers at Channel Nine invited Senator Hanson to speak about the lockdown of public housing blocks in Melbourne, they knew exactly what they were doing.

The Masked Singer slips, but still leads the ratings for Ten

Elsewhere The Block starts to crumble, and Seachange sinks beneath the waves.

This Time Next Year provides a strong return for Karl Stefanovic

Nine won the night over all, but Ten's Have You Been Paying Attention won the timeslot over Karl's return.

The Austalian newspaper continues to lose money at an accelerated rate; now that is good news! People at my local are asking each other, is Kim Williams up to the job? Many say probably not.