All the allure and fame of ex-cricketer Imran Khan couldn't carry the day at the weekend's Pakistani elections. The country is going back to the future with old faces -- but Pakistan is very different. 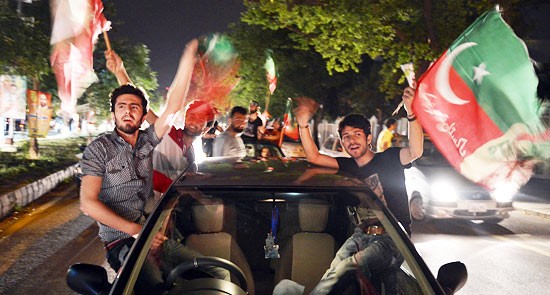 I spent the weekend transfixed by the election — “not the boring Gillard v what’s-his-speedos”, as a Pakistani friend noted, but the “Khan v the non-Khan” one.

In the end, the non-Khan forces in the form of Nawaz Sharif’s PML(N) party came out ahead of Imran Khan’s Pakistan Tahrik-i-Insaf (PTI); the former prime minister ahead of the former cricket star as people headed to the polls on Sunday. The Pakistan People’s Party, elected to government in the wake of the 2007 assassination of its leader Benazir Bhutto, saw its vote collapse amid anger not only over Taliban bloodshed but over economic hardship and electricity load-shedding.

If the PTI failed to achieve the “tsunami” of electoral support that its leader had forecast, it was still an impressive showing from a party that had previously only ever won a single seat in Parliament. And the estimated voter turnout of 60% was impressive, too, in the face of Taliban attempts to undermine the election with attacks against political candidates, rallies and polling booths. The fact that the election was held at all is a better outcome than some had predicted.

Perhaps there is a law of nature decreeing that a country is not allowed to elect glamorous leaders who make international commentators swoon more than once in living memory. Benazir Bhutto’s ability to reduce Western journalists to a quivering heap of adulation was frankly embarrassing (or it would have been, if her lovestruck fans had been alert enough to notice). And if charisma and sheer hotness were the only criteria for political success, then Khan’s tsunami would have swept the country, if not the planet. None of his rivals could hope to match the galvanising spectacle of Khan addressing the massive election rallies, even when a fall from a platform forced him to do so by video from his hospital bed.

But in the end, Sharif’s promise to deliver economic stability proved more alluring.

Economic stability of course requires political stability, and the religiously conservative Sharif seems set to make compromises with the Taliban in order to achieve this. But Imran Khan’s stated commitment to women’s rights (not to mention his reputation for womanising) did not prevent him from building relations with the Taliban.

While I am no fan of Nawaz Shaif (and I’m also female with a pulse), I found myself unable to sign up for the Khan love-fest, given his response to the shooting of schoolgirl Malala Yousafzai last year (she was Crikey’s person of the year for 2012, as voted by readers). This attack on a girl whose only crime was to assert her entitlement to an education caused near-universal shock in Pakistan, with politicians from the religious parties joining their secular counterparts in condemning the attack. Khan, too, denounced the attempted murder, visiting Malala’s bedside and offering to pay her medical expenses. But he qualified his denunciation by describing the war by the Afghan Taliban against foreign occupation as a “jihad”, and refusing to name the Taliban as those responsible for the attack on Malala.

Sharif’s previous prime ministership was so autocratic that many Pakistani liberals felt the military’s return to power under Pervez Musharraf could scarcely be worse. However, his ability to wield that level of control amid Pakistan’s spiralling crisis is probably limited. Despite having risen to influence under the presidency of military dictator Zia ul Haq, his relationship with the military has  never rebounded since his displacement and imprisonment by Musharraf.

He also faces an energised and far more independent media than was the case under his last prime ministership. When president Musharraf attempted to clamp down on media critics during the final stages of his rule, the immense growth in satellite television and internet access in the years since Sharif had undertaken the same exercise rendered him unable to do so.

The rise of Khan’s PTI aside, the post-election landscape in Pakistan may feature the same old faces from the 1990s — but it is not the same Pakistan.

It’s hard to remember a time when we’ve had such an avalanche of shocking scandals damaging the top echelons of government and the corporate elite in such a short space of time.

Our elections are boring cos they don’t have a death toll?

Our elections are boring because we don’t have a national political debate.

Pakistan “.. not the same..” but certainly not better.
As illegitimate entities go, only Israel – which stole other people’s land is worse – but the, cough-cough, ‘Land of the Pure’ can compare in that its elite stole the land of their islamic brothers, aka peasants.
The Bhuttos remain indistinguishable from the rest of the robber barons (an old pun pecavi is mordantly appropriate for their vast feudal estates in Sind… geddit?)- Benazir was merely the acceptable face of corruption for westerners whilst her handbag Zaddari Mr 10% did the dealing. She was complicit, actively or in the Nelsonian style, in the deaths of her brothers in Paris & Karchi and intended no change which would affect the ruling class.