An exceptional level of punishment. A just published academic study of the political consequences of financial crises perhaps should make Prime Minister Julia Gillard feel a bit better about the current predicament of her government. It’s probably not her fault. Not that the work by Jeffrey Chwieroth, reader in international political economy in the Department of International Relations at the London School of Economics, and Andrew Walter, professor of international relations in the School of Social and Political Sciences, University of Melbourne, predicts a likely late rally of electoral support. Rather, the evidence from the effects of banking crises over the past century the pair looked at show that crises have a dramatic impact on the survival prospects of governments everywhere.

“History and politics matter. Citizens have become both much more demanding of governments and more prospectively oriented since 1945. Governments perceived as unable to respond effectively to mitigate the consequences of crises for income, employment and wealth are by far the most likely to suffer political punishment.

“A number of paradoxes arise from our analysis:

“But the evidence suggests that great expectations persist regardless of formal policy constraints or attempts to shift blame.

Tony should be pleased. The critical response from many in the business community to his industrial relations policy is just what Opposition Leader Tony Abbott will have wanted. It makes him appear right in the middle of what is a difficult policy area for a Liberal leader.

The political constant. During my almost 50 years in Canberra writing about politics there has been one continually unresolved issue: the site of a second airport for Sydney. In election after election Labor and Liberals dance around the subject calculating which potential location would cause them the least electoral damage and their opponent the most.

It is a truly wonderful game and I am pleased to see that Federal Transport Minister Anthony Albanese is keeping it going with another magnificent non-decision that involves further inquiries. As the Sydney Morning Herald reports this morning: 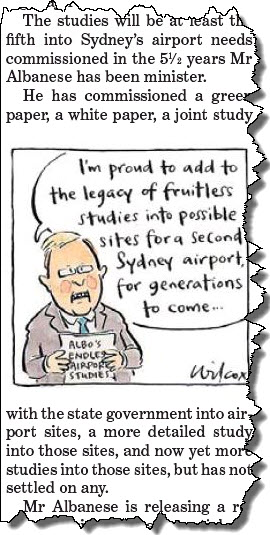 A study Albanese is releasing today suggests it would take 17 years to buy a site, prepare it, and build the airport. And that, apparently, is after a decision is actually made. I confidently predict that I will see out the rest of my years without a major airline landing in Sydney anywhere other than at Mascot.

Hoping it’s right. In my browsing to find items for my News and Views (below) there was one item this morning that I hope turns out to be right. From WIRED  comes an article Why e-mail newsletters won’t die, with the welcome prediction in these times of journalistic redundancies that “if something is important to you, e-mail products are the one reliable way to make sure you’ll see it”.

“if something is important to you, e-mail products are the one reliable way to make sure you’ll see it”.

The other major (and often overlooked) benefit of email is that anyone with a fixed IP can run their own email server. With Twitter, Facebook or any blogging platform, the owner of the platform has full access to mine all your postings.