The latest Audit Bureau of Circulations results show massive drops in print circulation and reveal, finally, how many readers are paying for the Herald Sun online. Hint: it's not very many. 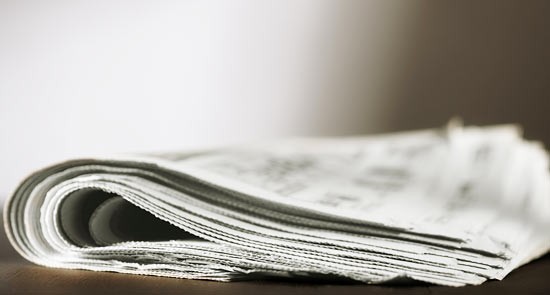 It’s not only politicians who know how to “take out the trash”; media companies, too, have canny ways of minimising bad news about themselves. Just look at News Limited, which unveiled its new metered paywall strategy on Wednesday — two days before the release of the latest Audit Bureau of Circulations figures.

The ABC figures answer a question media watchers around the world have long asked: how many digital subscribers does Melbourne’s Herald Sun have? The answer: 26,436.

The Hun went behind a “freemium” paywall in March 2012 — a closely watched development given it was one of the first mass-market papers in the world to do so. News Ltd had good reasons for choosing The Hun: it’s the country’s biggest-selling weekday paper and has unique content — such as the SuperCoach fantasy football competition.

But the months went by, News stayed schtum about its results, and a consensus emerged the experiment had been a flop. And so it was. For a paper that still sells over 400,000 copies a day, 26,000-odd paying online readers isn’t a cracking conversion rate. No wonder a metered model is on the way for News’ tabloids.

By contrast, The Australian online is going strong with 45,869 digital subscribers compared with around 120,000 print readers. At $12 a month, that equates to around $6.5 million a year in extra revenue. Under the current system, the Herald Sun paywall would bring in around $4 million extra a year. Nothing to sneer at, but not nearly enough to make up for the massive declines in revenues from print advertising and circulation.

The latest numbers don’t paint a pretty picture for print: total newspaper sales during the March quarter fell by 9.2% compared to the same period last year.

Fairfax Media‘s slimmed-down metro papers continue to shed readers. The Sydney Morning Herald‘s Monday to Friday circulation slumped by 18.2% year-on-year to 148,037; The Age dropped by 12.6% to 144,277. The Sun-Herald again recorded the biggest fall: it plummeted by 24.4% and is now outsold almost 2:1 by its News Ltd rival The Sunday Telegraph. The Sunday Age declined by 13.6%. Broadsheet holdout The Canberra Times fell by 7.8% on weekdays to 27,132, and the weekends were uglier.

The only major newspaper to lift its circulation was The Australian Financial Review‘s weekend edition, which increased — yes, increased — by 18.2%. A snazzy redesign helped but, as The AFR admits today, two “bumper” editions during the audit period gave the paper a boost. Bumpers allow papers to effectively double-count — sometimes even more — their copies sold. The Monday-Friday Fin now sells only 64,861 copies, down 8%.

Over at News Limited, there’s little to boast about when it comes to the dead tree editions. The Australian fell by 6.6% and the weekend Oz slipped by 8.9%. News Ltd says it is stripping back marginal sales — the heavily discounted copies you see at hotels, airports and universities — and that’s true. The Oz‘s circulation, however, remains inflated by such deals: 19% of the paper’s sales are in the accommodation, airline, education or bundled categories. That’s compared to 5% at The Age or 11% at The AFR. 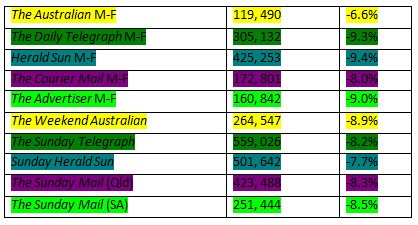 Circulation isn’t helped by crazy distribution policies. In smaller towns it’s virtually impossible to buy The Age unless you order it. I’m told by two newspaper sellers (both sub agents) in two Western Victorian towns that they can’t order the number they think they’d need (to cover an expected influx of visitors to the town, etc). They are allocated a number of newspapers and if any are returned their allocation is reduced next day. I can’t count the number of times I’ve set out to buy a newspaper and been disappointed. (Yes, I could order one but it’s not convenient)

thank God we have you to deliver the bad news Matthew, with your clever headline and hard hitting coverage, never mind that peoples jobs are at stake, and we’ll have to depend on twitter for news, Crikey will continue to take great delight in the alleged death of newspapers.

Still got a substantially larger audience than crikey though

No one has said why they are in decline; or why Crikeys subscriptions are on the rise.
I wonder of if the drivel they print in those rags has anything to do with it? It is amazing that anyone buys these comics that purport to be “news” papers at all. Lets look at the percentage of the population that can read and choose not to have their intelligence insulted. Their numbers are on the rise.

If the Limited News papers disappeared it would be no loss as they only misinform. Many people now don’t read newspaper or watch TV news and have no idea what is going on outside ‘My Kitchen … ‘ etc. But Fairfax I’d miss. Can’t do the crosswords online.

Journalists are inherently lazy. They are opinionated to the extent of irrelevance to an increasingly savvy readership. Articles are poorly written, biased,often malicious and with the view that there is a rule for the press and for no one else- in the guise of freedom of speech. – a much abused concept all well and good if it is used responsibly. Anyone disagreeing with the opinion is censored of villified via the blogg or the editorial staff. Letter columns are contrived with nom de plume ghostwriters to the fore. The issue of advertorials is already well discussed in these pages. The opinion writers think they have impact on the readership- wrong – as empirical research shows that they don’t have the impact they think they have. Tracey don’t worry too much about availability of the Age as the changes in the editorial staff is rapidly taking the age into the realm of the Herald Sun and Telegraph with their only value that of their reporting of the Footy. Advertising revenues are falling as circulation falls as they main advertisers have moved online for employment Real Estate and Travel.