WorkChoices it ain’t, but Abbott’s IR plan is partly feral

The Coalition has finally unveiled its IR policy, a minimalist document that is not without its concerns for trade unions -- and anyone walking past a building site. 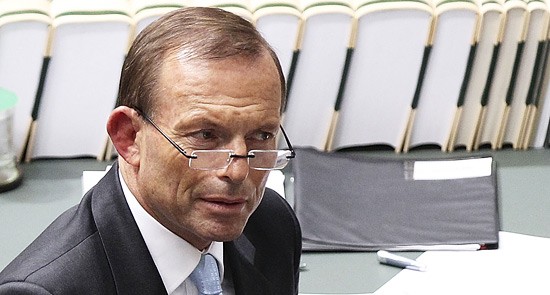 Many of the changes proposed by Abbott fall into areas examined by last year’s government-appointed review of the Fair Work Act. On the use of individual flexibility arrangements (IFAs), for example, the review noted that unions didn’t like them and tried to limit them in enterprise agreements as much as possible, despite there being a legislative requirement for flexibility terms in agreements. The review recommended the act be amended to ensure that the minimum number of areas of flexibility currently prescribed in regulations be permitted in enterprise agreements. The Coalition’s new policy, which is rather vague, is along similar lines:

“To provide workers genuine access to flexibility, the Coalition will ensure that IFA’s [sic] cannot be restricted in an enterprise agreement. This will ensure they are available to workers if they ask for one.”

The Coalition will also increase the requirement for written notice of termination by either employers or employees to 13 weeks — just slightly longer than the review recommendation of 90 days.

In both cases, employers will be deeply disappointed: they had proposed to the review that they be allowed to require IFAs as a condition of employment, which was rejected by the review, and that much longer periods of notice of termination be allowed, like six months or a year.

And on greenfields negotiations — an area recognised by the review as problematic and where unions had exploited the FWA provision, like the review, the Coalition wants good faith bargaining provisions imposed, and a time limit. Whether the three-month limit is what the FWA reviewers had in mind isn’t clear, since the review didn’t specify a precise period.

The Coalition also proposes to confine protected industrial action to circumstances where “the Fair Work Commission is satisfied that there have been genuine and meaningful talks between workers and business at the workplace; and that the claims made by both parties are sensible and realistic”. A key complaint from business and their media cheerleaders is that the FWA makes industrial action too easy compared to WorkChoices, despite industrial action still being at historically low levels compared to the pre-WorkChoices period. The Coalition proposal does open the opportunity, depending on drafting, to significantly limit industrial action, but it also echoes the review’s recommendation that:

“an application for a protected action ballot order may only be made when bargaining for a proposed agreement has commenced, either voluntarily or because a majority support determination has been obtained. The Panel further recommends that the FW Act expressly provide that bargaining has commenced for this purpose despite any disagreement over the scope of the agreement.”

“Amid a moderate, sensible set of IR reforms, the Coalition has placed a direct assault on our most basic rights.”

Much of Abbott’s rhetoric yesterday was actually aimed at what he suggests is the endemic problem of union corruption, with proposals to establish a new regulator to oversee registered organisations. He spoke of subjecting unions to the same kind of legal rigour as businesses. Unions, presumably, can look forward to a system in which executives who preside over disasters can get big payouts to leave, dodgy executives can escape punishment and move on to other unions and unions that break the law can simply fold and “phoenix” themselves under a new name.

But Abbott walks a fine line on IR. His party, and its business backers, want an aggressive set of IR reforms, probably something like the final version of WorkChoices after the Howard government realised its error and instituted a no-disadvantage test. But Abbott himself comes from a different, more union-friendly ideological tradition and opposed much of the WorkChoices agenda. Thus, both political calculation about the cost of being seen to restore WorkChoices and personal belief inform this minimalist approach to reform.

He has, however, provided his colleagues with a path to greater reform: the reliably pro-deregulation Productivity Commission will be charged with reviewing the Fair Work Act, and if a Coalition government wants to adopt any recommendations, it will take them to an election first. Under former PC chairman Gary Banks, who was hard-Right in economic ideology, a PC review of IR would have produced a predictably hardline series of recommendations to strip workers’ protections and reduce the capacity for union intervention.

However, Banks has been replaced by Peter Harris, who was heavily involved in deregulation under the Keating and Howard governments before moving to the Victorian public service under former Victorian premiers Steve Bracks and John Brumby. Whether a Harris-era PC will produce the same attack on workers’ rights that Gary Banks’ institution would have done remains to be seen.

There’s one area, however, where the Coalition has gone feral: the restoration of the Australian Building and Construction Commission.

Let’s be clear: the primary achievement of the ABCC under the hard-Right ideologue John Lloyd was a spike in workplace deaths in the construction industry, with the ABCC curtailing the capacity of the Construction, Forestry, Mining and Energy Union to pursue safety breaches within the industry. That neither the Howard government, nor its media cheerleaders, nor the wider media ever gave a damn about these deaths is a damning indictment.

Moreover, the ABCC was also given draconian enforcement powers: a power to secretly question anyone it liked, with those it interrogated prohibited from revealing it under threat of imprisonment. Further, there was no right to silence before the ABCC. And lest you think these Stasi-like powers were only employed against union thugs, think again.

The Coalition proposes to restore all of these draconian powers:

“A re-established ABCC will have appropriate and effective safeguards to ensure due process and transparency. We will ensure that compulsory interview processes retain Commonwealth Ombudsman oversight and that they are videotaped.”

That is, the ABCC’s power to drag innocent witnesses off the street and attend interrogations that subjects are not permitted to reveal will be restored, with the “protection” that they will be videotaped.

It’s only a month since Abbott was joining the Institute of Public Affairs to celebrate its defence of freedom. The ABCC’s powers were so extreme, even the IPA criticised them. Amid a moderate, sensible set of IR reforms, the Coalition has placed a direct assault on our most basic rights.

No detail on what some of the changes will be ..just a “mothercare” statement saying things like “we will make it fairer”..but not the how or what.

Will any Govt finally legislate the working conditions, salary packages and bonuses of the Boards and CEOs’ who vote for their own double digit payrises and multi-million dollar bonuses even when the company profit has fallen and share prices have dropped.

Or the multi-million dollar severance packages for failed executives who have overseen a fall in company profitability and share prices.

Policy ? What policy? motherhood statement indeed AA Lets not go into any details. LOTO ,I Want the Lodge and I want it now. Unpacking done and surprise! suprise! here it is Workchoices for the slaves kissy kissy “I knew I would find it somewhere” cuddles up to policy document and puts thumb in mouth, big sigh, and sleeps very well.

Whatever Abo coes up with can’t be worse than the current shambles:
Union Officials unaccountable for their actions – to either authorities or their members;
Widespread distrust of current temporary visa arrangements and xenophobic comments abound;
Businesses off shoring / downsizing or in receivership = not good for employment prospects;
Handouts to a moribund car industry with no commensurate job guarantees; and
The only employment growth sector being the State and Federal Government = how productive!

Legislating to overrule JJ Richards is darkly coded. It probably means, as recent Qld IR amendments explicitly provide, refusal to respond to even reasonable union attempts to negotiate negates the right to proceed to a protected action ballot. That is abolishing the right given by Howard and Reith in Workchoices by giving the employer a tactical veto.

2. The “consideration of a separate appeals jurisdiction” opens the door to stacking FWC top down, or promoting the arch conservatives in FWC’s ranks already (and there are plenty), maybe even to judicial roles. Now that would be a major roll-back in IR politics, back to the 30s!