Crikey Clarifier: why is the Great Barrier Reef in danger?

UNESCO has held off putting the Great Barrier Reef on its endangered list -- for now. Crikey intern Sasha Petrova finds out why the reef's in trouble and what the next steps are. 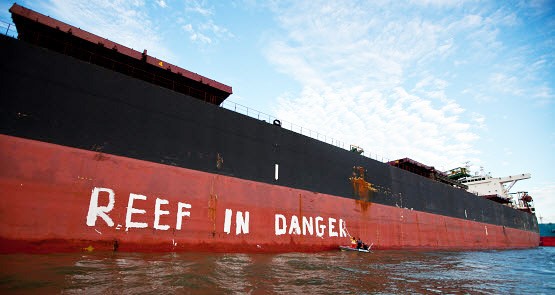 According to the UN, Australia’s mining boom is endangering the Great Barrier Reef. In a report released last week, the UN Educational, Scientific and Cultural Organisation warned Australia to slow down port expansion in the reef’s World Heritage area before the reef ends up on its list of endangered sites.

The Great Barrier Reef World Heritage Area is bigger than Victoria and Tasmania combined, and is home to 500 species of fish, over 360 species of coral, more than 4000 species of molluscs and over 1500 species of sponge. But it has lost half its coral cover over the last 27 years, and there are fears that coral cover could halve again by 2022. So what is the UN’s endangered list, and what can be done to keep the reef off it?

What is UNESCO’s list of world heritage properties in danger?

In 1972, UNESCO adopted the Convention concerning the protection of the world cultural and natural heritage, which is implemented by the World Heritage Committee. Primarily, the committee is in charge of ensuring protection of 962 World Heritage Sites, a list of properties UNESCO considers to have “outstanding universal value” (or OUV). The Great Barrier Reef was added to the list in 1981.

If a property’s OUV is “threatened by serious and specific dangers, such as the threat of disappearance caused by accelerated deterioration, large-scale public or private projects or rapid urban or tourist development projects,” the site will appear on the WHC’s endangered list, which currently has 38 properties.

Why is the reef under threat?

Immediate threats to the reef come from agriculture and, more significantly, ports accommodating coal, natural gas and oil shale extraction plants. Water quality decline is caused by both agricultural irrigation, which carries pollutants into waterways and the reef lagoons, and by nearby port infrastructure development. But as James Cook University’s Jon Brodie told Crikey, although the government has made attempts to manage the agricultural impact on water, water quality decline as a result of coastal development has not been addressed.

“In the case of ports, sediment is mobilised into the water in dredging and causes quite toxic effects. Turtles in Gladstone Harbour have high levels of metals, which is a contributing factor to mortality of turtles in the area,” he said.

There are 12 ports in the Great Barrier Reef World Heritage Area, including these mega ports: Gladstone, Fitzroy Delta and Balaclava Island, Dudgeon Point, Abbot Point, Cape York and Townsville. The constant passage of ships to and from the ports can damage the area through groundings, collisions, introduction of invasive marine pests, oil and chemical spills, waste disposal and anchor damage. In April 2010, the large coal-carrier Shen Neng 1 left the port of Gladstone heading for China and ran aground in Great Barrier Reef waters, with the impact rupturing the ship’s fuel tanks and releasing approximately four tonnes of fuel oil. The subsequent impact assessment report noted that the oil spill caused “extensive and severe physical damage to and destruction of the shoal habitats and considerable contamination by antifouling paint”.

What are UNESCO’s concerns?

Red flags appeared in 2011, when the Australian government didn’t inform the WHC about its approval of LNG developments on Curtis Island within the reef area, as is required under operational guidelines of the heritage convention. A UNESCO reactive monitoring mission was sent to Queensland in March 2012 to investigate and the threat was issued: the reef did not “currently meet the requirements for inscription on the List of World Heritage in Danger,” the mission’s report said, but “risked meeting those requirements if remedial measures are not undertaken”. The 14 measures mainly concerned the decline in water quality as a result of coastal port developments.

A year went by, and the committee met again to review Australian government progress reports, as well as some other documents sent by independent NGOs like the Australian Marine Conservation Society and the World Wildlife Fund. The conclusion was outlined in UNESCO’s report released last Friday, which noted a lack of progress on its recommendations relating to water quality and measures to prevent coastal development.

The report said that while Queensland’s draft Great Barrier Reef Ports Strategy 2012 -2022 proposed to prevent “significant” development outside existing port areas until 2022, “it does not restrict development to the existing footprints of individual ports”. The committee raised concerns about the 43 proposed port expansions currently being considered by the Queensland government. Particular mention was made about the possible expansion of Balaclava Island and Port Alma in the Port of Gladstone, as these locations are “outside existing major port areas”.

UNESCO recommended a strategic planning framework be put in place and monitoring of the site continue, with a final report — to outline long-term sustainable development and management — to be produced by the Australian government in 2015. UNESCO postponed its decision on whether to put the reef on the endangered list until 2015. Felicity Wishaw from the Australian Marine Conservation Society explained to Crikey: “They’re giving the government a couple of years to get their act together, but that doesn’t preclude them from making the decision at any time.”

But according to Brodie, waiting for the official decision isn’t needed to consider the reef in danger. “Seagrass is disappearing, the dugong population is disappearing, fish are under threat; to me it is obviously in danger,” he said.

Outflanked on renewables by the NSW Coalition, time is right for Fitzgibbon to go

Im sad to say I have zero confidence that any government of Australia will act in the best interest of the reef.. Until its far too late…

I guarantee if it was a uranium mine’s viability under threat the governments (state, federal) would be scrambling to protect it.

But it’s only an irreplaceable reef and doesn’t belong to a corporation in a position to make political donations. If the reef belonged to Big Business they’d be running anti-government ads across the media to protect their asset.

Apparently, if we can’t dig it up and flog it off then it’s not worth worrying about.

After watching Clive Palmer last night on Q&A I have nothing but despair over the GBR. He appears mightily impressed by his own company’s decision to put covers on its rail transport of black coal; on the basis of preventing the coal dust from being blown into the Reef.

This may, or not, help the Reef, but his indifference towards any hard-edged solution to our environmental problems would be laughable, if it weren’t for the fact that all his, and Bob Katter’s prefs will go to the Coalition.

Seldom will one man, Tony Abbott, have waltzed into power with such consummate ease in our, and everyone else’s, history.