RBA guns the economic engines as govt applies the brakes 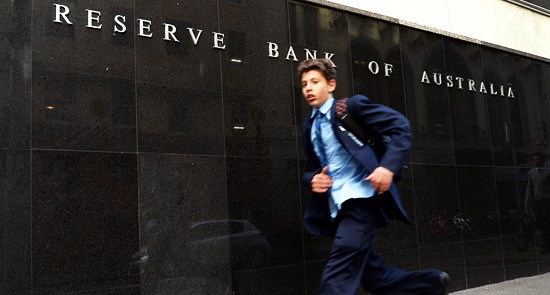 Between November 2011 and yesterday, the RBA has cut interest rates by 1.75 percentage points. Yesterday, evidently frustrated at the failure of the economy to respond to what should have been a substantial stimulus and at the dollar for failing to respond at all, it cut again, in a move that surprised many economists (and us).

The change in approach by the RBA can be seen in the altered language about the impact of the preceding rate cuts. In speeches and statements, the RBA has seemed increasingly confident that lower interest rates were “gaining traction” and boosting demand in non-resource sectors of the economy, such as residential construction. At its April meeting the bank said recent data suggested sensitive parts of the economy were responding to the historically low cash rate. But not fast enough at the May meeting, for the bank to remain confident that would still be the case later in the year, so it seems.

This comment from governor Glenn Stevens admits as much:

“The Board has previously noted that the inflation outlook would afford scope to ease further, should that be necessary to support demand. At today’s meeting the Board decided to use some of that scope. It judged that a further decline in the cash rate was appropriate to encourage sustainable growth in the economy, consistent with achieving the inflation target.”

There are some faint similarities with RBA decision and those from the European Central Bank, the Bank of Japan and the US Fed this year, all of which seem to have become frustrated with the reluctance of their economies (which are basket cases, compared with ours) to respond to major policy changes.

The RBA is using the traditional blunt instrument of monetary policy (rate cuts) to try to get demand levels in the domestic economy growing faster ahead of the slowdown in resource investment later this year. The US Fed, the Bank of England, the ECB and the Bank of Japan, with rates already more or less at zero, have resorted to more unconventional policy tools such as quantitative easing, while the ECB has backstopped the eurozone’s floundering banks and supported weaker economies by buying debt. But the record low rates in Europe, UK, Japan and the US, and the huge multitrillion-dollar spending sprees haven’t really cut unemployment or sparked a surge in demand in any of these huge economies. Conditions have improved, but economies remain sluggish to, in the case of Europe, depressed.

But one common factor in every case other than Japan has been fiscal consolidation by governments. Ignore the headlines about revenue writedowns for a moment — federal government spending this year is still expected to contract by 1.5% of GDP. Most state and territory governments are also cutting spending. That’s a significant countervailing force to the RBA’s efforts to lift domestic non-mining growth.

The other countervailing force, obviously, is the dollar. There’s a line being run by a number of armchair generals in the media who want to see a currency war that yesterday’s cut was squarely aimed at reducing the dollar. Stevens singled out the currency for special mention:

“The exchange rate, on the other hand, has been little changed at a historically high level over the past 18 months, which is unusual given the decline in export prices and interest rates during that time. Moreover, the demand for credit remains, at this point, relatively subdued.”

But focusing solely on the dollar overlooks that the RBA is trying to support the economy while the government is ripping demand out of it. So the rate cut was aimed at achieving several things — providing some extra stimulus for the economy ahead of what’s expected to be a tough budget, bolster faltering growth in housing and non-resource investment, and putting downward pressure on the dollar.

Whether this cut will be any more successful than the previous 1.75 percentage points of cuts is a good question. It will mean lower rates on term deposits as they roll over and lower rates for transaction accounts. And more than half of mortgage holders have been using the rate cut to repay their loans faster than they have to. Home lending is weak, but the 4.4% growth in lending in the year to March was far stronger than the 1.6% growth in business lending in the same time. No wonder overall credit growth is subdued at 3.2% in the year to March.

The cut knocked the dollar lower after it weakened by more than a third of a cent ahead of the decision at 2.30pm. After that it lost half a cent against the greenback, to be nearly four cents lower than its high last month. But it then recovered slowly, before easing to finish this morning in New York at 1.0180. Despite what the armchair generals at The AFR are saying, it will take more than a 0.25 percentage point rate cut to inflict serious damage on the dollar. That AAA stable credit rating the same generals have demanded for years is a powerful attraction to investors chasing yield.

The rate cut will result in investor interest turning further toward the sharemarket and high-yield shares such as the banks (listen for another chorus of “bank bubble booms’ from the generals and their officers), Telstra and some industrial shares. Dividend yields of 4% or more will look better than bank deposits of 4% or less as the rate cut works its way through bank term deposits and account rates.

The move came despite the overwhelming forecasts by economists surveyed by Reuters and The Wall Street Journal that the bank wouldn’t cut rates. The consensus was for a rate cut in June, after the federal budget. Reuters’ survey had just four of 21 respondents predicting a cut, while one from The Journal had only two of 18 economists expecting a cut. But market traders had priced in a 61% chance of a cut yesterday morning and that had tightened a lot in the past week. Screen jockeys: 1, economists: o. But amid all the hysterics about a “budget out of control”, perhaps we need to wonder why the RBA is having to push rates down to such lows in an effort to spark the domestic economy.

The building industry is stuffed, especially the private domestic sector. Lower interest rates might help but isn’t there a real problem caused by an opposition that keeps marking everything that labor does as a complete catastrophe. Oh, & don’t do anything until we’re in control. In my opinion the constant rhetoric about out of control spending & impending doom under labor & beaten up by the MSM has effectively put the handbrake on spending in the domestic sector. This is only aided & abetted by the blind acceptance by most media (yes Crikey that includes you) that labor has no chance at all on Sept 14. It would be really interesting for someone to try & equate what detrimental impact on the economy has resulted from the libs campaign of fear & loathing. God help us.

BK and GD – remember that big German word while you two look at that half empty glass of koolaid you have both been selling the past couple of years. Maybe share some of it with Stevens, Gittins and Pascoe. Just for once BK try saying … I’m sorry but I was wrong … Na. didn’t think so – as no one says they’re sorry these days.

This will take me a while to digest Bernard. I was one that did not think a rate cut was in what was required as this has had no effect on the dollar and have thought that Aus dollar the plaything of the Internationals (safe haven) and as a nation unfortunately not a lot Australia can do about it and the rate cuts only benefitting the already over-supported overinflated housing market. Stuff the superannuation pensions and totally self funded retires, in a market where there are very few reasonable risk share options. As you have said Aussie four big banks really are about the sum of it and I think that they are profiteering, in a protected market. We are definitely between a rock and a very hard place. Fixed deposits of 1 x million are on a level with aged pensions without any of the Benefits, medical, pharmacy, rates, registration etc those in a superfund fixed payments are losing capital and payments. The banks are not. Your Idea as treasurer re Super profits on banks I support absolutely. Money invested in fixed deposits that are loaned by the banks are earning over 50% on what they pay the depositors!
I have as yet to come to grips with how lowering interest rates for Bank deposits leads to Increase Business Investment. This has obviously not worked to date in Australia or Internationally so what now? More so called investment in an overblown housing market? to be propped up to? can’t be allowed to find a proper level as the entire economy would collapse under the weight of PERSONAL DEBT.

@mikehilliard: totally with you on this! The confidence tricksters of the LNP/MSM/ABC/Murdochracy

Funny you mentioned MPasc Simon. My friend read an article by MP this morning on Yahoo, MP quoted from some Matusik guy who claimed that it’s government over spending that’s the problem, it increased by 3.3% GDP while revenue dropped only 0.1% of GDP which is an insignificant problem, and the fiscal consolidation in the last two years is biting the economy.

We’ve been wondering if the government did not spend that much on the stimulus or went into fiscal tightening earlier, what would unemployment rate and tax revenue be? How well Australia fair compared with the rest of the Austerity countries, someone have said Sweden went well but their unemployment rate is about 9% I think.

I agree that there’s been some inefficiency in their spending and some not well targeted but what if spending was much less? They’re saying the economy is tanking now because of less spending but they also criticise them for having spent too much.