Travellers left in lurch as Melbourne company shuts up shop? ... we fact-check whether the ABC is a Left "monoculture" ... credit cards cut up at Nine ...

Clients grounded. There are concerns hundreds of paid-up travel bookings have been voided and some may not be honoured after a Melbourne travel agency suddenly shut up shop overnight. Staff at Carlton-based Navigator Travel Management arrived at work on Monday to discover managing director Daniel Alexander was not around. Staff member Guillermo Montalvo told Crikey a supervisor told him it appeared Alexander may have left the country. 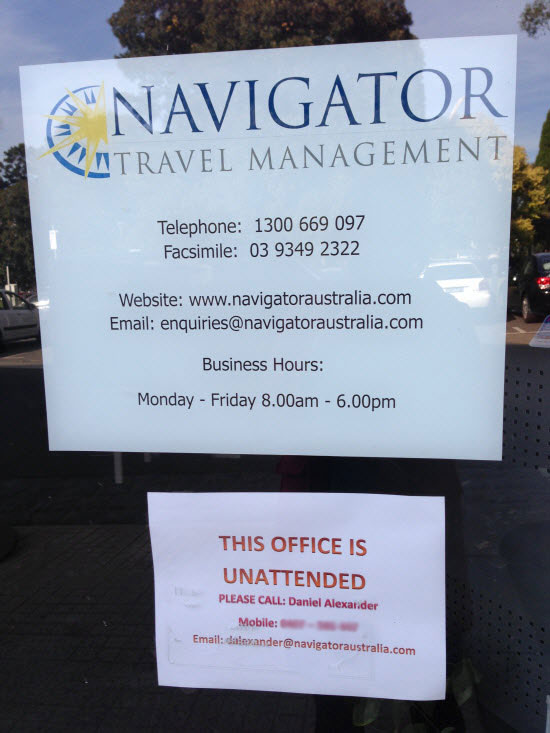 High-profile clients and airlines are struggling to honour hundreds of travel bookings that had been voided. Montalvo claims roughly 200 travel bookings from Melbourne University — Navigator’s largest client — were voided, but the money had not been refunded. Some tickets, he said, cost up to $20,000, with an average price of about $10,000.

A university spokesperson told Crikey the University of Melbourne was “ending all dealings with Navigator Travel and working with affected staff, airlines and other agents to have their bookings honoured”. The spokesman also says some affected staff are being supported through the credit card payment dispute process and may appeal to the Travel Compensation Fund — an organisation that helps travellers with compensation of losses as a result of the financial collapse of a participating travel agency business.

Crikey visited the deserted premises to try to speak to Alexander, and has phoned his mobile several times. He has not picked up the phone and it appears to be ringing internationally. Crikey has left a message seeking comment; the office landline is ringing out. Navigator Travel Management’s status currently appears as “registered” on the Australian Stock Exchange.

Bottoms up for Queensland minister. A scoop from female-skewed start-up Show and Tell, which got radio star Kate Langbroek talking about her brother — key Campbell Newman frontbencher John-Paul Langbroek. Asked about what she did as a kid that was “a little odd”, the Nova FM breakfast host said:

“My brother John-Paul and I used to share a bedroom. After our bath, we’d pull our PJ pants down and rub n-ked bottoms. We LOVED it. No wonder he grew up to join the Liberal Party …”

ABC bias check. Right-leaning warriors are enraged at the selection of Paul Barry as the next ABC Media Watch host, claiming it cements the Left’s stranglehold on Aunty. Self-appointed media regulator Gerard Henderson said today the ABC was “a conservative-free zone” and suggested “it does not have one conservative presenter of any of its main current affairs programs”. For his part, Andrew Bolt wrote to ABC managing director Mark Scott offering himself for the role. Bolt warned of the Left “monoculture” at Media Watch, saying: “Why else is every mainstream ABC current affairs show hosted by the Left …”

So does the ABC slant heavily to the Left? Crikey loves a good fact check, so take a look at our list of ABC staff who went on to be a politician (or candidate) for a major political party. We found 15 ex-ABC staff who went to Labor (think Maxine McKew, Deborah O’Neill, Bob Carr), and 14 to the Coalition (Sarah Henderson, Pru Goward, Gary Hardgrave). Seems pretty even on that measure. If you’ve got more names to add, drop us an email.

Those were the days. Some sad noises from the well-heeled in TV circles at Channel Nine cutting up executives’ and EPs’ company Amex credit cards. Apparently Nine has a new claims system and handing out credit cards is not part of it. Right around the business world, gone are the days of the company lunch, golf afternoon, accommodation for work, cheeky bottle of shiraz — all on the company card.

Do you have any reminisces from the golden days of largely unaccountable use of your company card? Send them in and we’ll run the best as a tribute to kinder, gentler days in the workplace. By the time Tips started work as a cubbess reporter, times were so tight that the boss wouldn’t pay for street directories in the company cars we used to cover stories. This was pre-smart phone days, so it lead to some navigational challenges. But then a new editor came along, and Tips was shouted to an evening on the company card — drinks, dinner and port afterwards. Lovely.

Free speech is only acceptable when the likes of Limited News regulate it.
Anyone who doesn’t agree with them is “Left” out in the cold.

ABC bias? One only has to see Virginia Trioli simpering in front of Le Grand (News Ltd) yesterday to wonder about which direction the ABC is leaning. Incidentally if the ABC has a charter excluding commercial advertising, why do they advertise the Murdoch papers every day, still worse why do they quote from them and give them credibility. Not the role of an “independent” ABC surely.