Ernst & Young says in its latest Fraud Survey published this week that hard-pressed company bosses are under so much pressure to deliver on growth that many have resorted to cooking the books.

When the time is right. Tony Abbott will have learnt one lesson from the disquiet within his own ranks over his generous parental leave scheme. This is an economic environment where promises made should not be given a firm timeframe. Rather this election’s policies should be framed as “these are the things we intend to do as soon as conditions enable us to”.

It’s not just politicians. Who can we trust? Spinning with a little bit of dishonesty tossed in is not just a political practice. Business leaders throughout the world are engaged in it too. Ernst & Young says in its latest Fraud Survey published this week that hard-pressed company bosses are under so much pressure to deliver on growth that many have resorted to cooking the books.

Reuters reports that one in five of almost 3500 staff quizzed in 36 countries in Europe, the Middle East, Africa and India said they had seen financial manipulation in their companies in the last 12 months, the accounting and consultancy firm said. In addition 42% of board directors and top managers surveyed said they were aware of “some type of irregular financial reporting … Meanwhile, almost half of the sales staff surveyed across all sectors did not consider anti-corruption policies to be relevant and more than a quarter thought it acceptable to offer personal gifts or services to win or retain business.”

Another Labor failure. Confirmation this morning of the ReachTEL finding about the public reaction to the government announcement of a disability scheme with its increased Medicare levy. Newspoll has similar findings — broad support for the action and a decline in support for the Labor government that introduced it.

I’m alright Jack. Unemployment in the US may still be high but it’s little wonder that the stock market is booming along. From owenzidar: 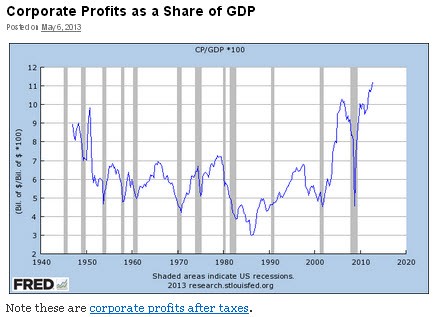 This Australian software services company is a poster child for a new era of overvaluation.

If big business wants to see open borders, it needs to convince people that it will bring real benefits to them — not just whinge about populism.

The Bosses Behaving Badly in a Pandemic Award has some strong new contenders.

“Another Labor failure” – rubbish, go & get a life Farmer