People are in support of the Medicare levy to pay for the NDIS. And they're also ready to throw out the people who proposed it. Plus other political snippets along the way.

A finding to support my own judgment. I have no experience with these new-fangled automatic opinion polls, and they have too short a track record to allow a judgment based on history. But I can say this about the ReachTEL poll reported last night on the Seven Network’s National News: its findings on the public reaction to increasing the Medicare levy by 0.5 percentage points to pay for the government’s disability care reforms are pretty much what I expected.

A clear majority of those polled expressed support for increasing the levy. Even when talking anonymously to a computer most people I know would hesitate to say they were against helping a clearly needy group in our society. But do these feelings of altruism extend as far as thinking better of those responsible for making us pay more tax? Well, actually, no. Many more people are less likely to vote Labor, finds ReachTEL, because of it than those who say they are more likely to. And as for who people trust to best deliver the disability scheme, well Opposition Leader Tony Abbott gets more nods of support than Prime Minister Julia Gillard, who made the brave decision to introduce it. 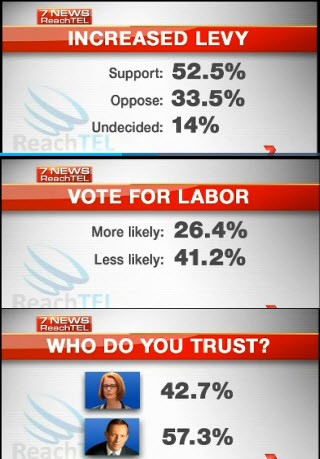 Still going down.  A similar message from the Crikey Federal Election Indicator. Labor goes further down and the Coalition further up the probability scale. Two views on a rate cut. There appears to be a difference of opinion between markets as to the likelihood of a rate cut by the Reserve Bank board tomorrow. From the finance pages on The Australian this morning: The prediction of the Crikey Interest Rate Indicator based on the betting market: Clive’s and Bob’s parties. That maverick pair of Queensland political party founders Clive Palmer and Bob Katter will take heart from this finding from a survey conducted by Melbourne University’s Citizens’ Agenda national survey released at the weekend: There’s not much regard for either Labor or Liberal leaders, and the lack of enthusiasm is potentially fertile ground for newcomers.

The growth of UKIP in the UK shown at last week’s council elections might yet be repeated here. Andrew ‘the Bolter’ Bolt is a victim of a changing climate

All the pros and cons of climate change — now, you can decide!

And “Abbott” there’s only one way some people will learn? They have to “Lick the cane toad.”?