Surprisingly for such a flaming hot issue, in recent decades the political struggle over tax appears to have dimmed. Three years after the Henry Review, Crikey senior journalist Andrew Crook and CPD researcher Adrian March find out: where do the parties stand on tax?

Crikey is already five policies in to its PromiseWatch series in conjunction with the Centre for Policy Development. Today, that perennial hobby horse, taxation.

There is perhaps no bigger core ideological issue for Australia’s political parties than taxation. If the Labor Party was founded to ensure a fairer redistribution of capitalism’s surplus and the Liberal Party as a check on that progressive tendency, then tax should by rights remain a key battleground.

Surprisingly for such a flaming hot issue, in recent decades the political struggle over tax appears to have dimmed. Last year’s budget papers showed Australia’s tax-to-GDP ratio is much lower than most OECD countries and as a proportion of GDP since Gough Whitlam tax was actually lower under the Labor governments of Bob Hawke (22.3%), Paul Keating (20.7%) and Kevin Rudd (21.45%) than under Liberal PM John Howard (22.3%).

Nevertheless, as part of the 2008-09 budget, the Rudd government announced an overhaul of the Australian tax system as business pressure for “simplification” increased. The Henry Review, known formally as “Australia’s Future Tax System” was chaired by then Treasury Secretary (and wombat fan) Ken Henry. His report was released to the public in May 2010.

Henry was charged with making “recommendations to create a tax structure that will position Australia to deal with the demographic, social, economic and environmental challenges of the 21st century and enhance Australia’s economic and social outcomes”.

In total, Henry produced 138 recommendations, most of which were ignored by the Rudd and Julia Gillard governments. These recommendations stemmed from the first recommendation of the Henry Review itself — that tax revenue should be drawn from four efficient, broad-based taxes: personal income, business income, rents on natural resources and land, and private consumption (p. 80). Henry argued that all other taxes should be phased out, except taxes that address social and economic costs, such as tobacco, alcohol or environmental damage. Overall, the review argued for a simplification of the tax system.

While not a comprehensive list, some of the key changes included:

So, three years after Henry, where do the parties stand on tax?

The ALP outlined its general tax principles in its National Platform, released after Labor’s 46th National Conference in 2011.

Broadly, Labor considers a fair tax system would encourage all Australians to work, equitably distribute wealth and allow governments to provide public services. However, Labor also supports the allocative efficiency of markets, “except where interventions would address market failures and serve environmental or social purposes”.

The National Platform states that Labor tax reform would ensure “everyone pays their fair share of tax” and specifically mentions that executives and the wealthy should pay a “fairer” share of tax. The stated goal of these reforms is to ensure that all levels of government have a sound revenue base for investing in social and economic infrastructure and quality public services.

The Rudd Labor government announced its response to the Henry Review in May 2010. The centrepiece of this announcement was the Resources Super Profits Tax (RSPT), a 40% tax on mining profits, in addition to the normal level of company tax. All non‐renewable resources were included, although companies could claim a number of deductions for state royalties and depreciation. The RSPT would have been accompanied by a cut in company tax from 30% to 28%, to be slowly introduced by 2014-15.

The government also announced an increase in the rate of employer compulsory superannuation, which would be gradually increased from the current rate of 9% to 12% by 2019. The increase in superannuation was not a recommendation of the Henry Review, but had been a longstanding Labor policy from Paul Keating’s time as treasurer.

After negotiations with the mining industry, the Gillard government scaled back the RSPT. The new Mineral Resources Rent Tax (MRRT), only covered coal and iron ore and had a headline tax rate of 30%. This was accompanied by a reduction in some of the linked measures, including an announcement that company tax would be reduced to 29%.

To help pay for the National Disability Insurance Scheme, Labor will increase the Medicare levy by 0.5 percentage points, from 1.5% to 2%, a change that the prime minister wants to make permanent. However, the levy will only cover half of new annual spending under the NDIS, or “DisabilityCare”, as the government has dubbed it.

Opposition Leader Tony Abbott’s new book sets out the Coalition’s “plan for government”. It does not specifically mention the Henry Tax Review but does outline several potential Coalition tax policies. It complements two policy documents released prior to the 2010 election.

The Coalition released a document in 2010 outlining its core economic beliefs, entitled Coalition Economic Principles: Rebuilding Sustainable Prosperity. It attempts to articulate the intellectual basis of the Coalition’s tax policy.

The Coalition’s guiding light is that the “rights and choices of individuals are paramount”:

“The Coalition acknowledges that government has a role in raising taxes and other revenue, formulating laws and regulations, and spending money to achieve legitimate social objectives. However, the government’s powers to spend and to regulate need to be exercised with caution. Taxes must be as low, as fair, and as simple as possible.”

The Coalition provided some of its specific tax policies in a 2010 pre-election document, The Coalition’s Economic Action Plan.

The Coalition has announced that it would repeal both the Mineral Resources Rent Tax and the Clean Energy Bill if it wins the 2013 election. It intends to meet Australia’s Renewable Energy Target commitments through a Direct Action Plan referred to uncharitably as “soil magic”. The Coalition believes the plan would cost $3.2 billion over four years. Direct Action purports to reduce carbon pollution by establishing a Emissions Reduction Fund, which will then “buy” carbon from firms that reduce their carbon emission below a historic average.

Other key tax policies include:

The Coalition has also planned to introduce a $4.3 billion Paid Parental Leave Scheme. Mothers would be given 26 weeks’ paid parental leave at full replacement wage (up to a maximum salary of $150,000 per annum) or the federal minimum wage, whichever is greater. The scheme would be funded by a 1.5% levy on about 3300 Australian companies with taxable incomes in excess of $5 million. In practice, this means some companies will have their company tax cut partially reversed, although Abbott has claimed some companies would still benefit from the tax cuts under related policies to be released after the budget. Liberal backbenchers are starting to make their feelings clear about the tax, citing traditional Liberal principles of a non-interventionist state as reasons to junk it.

After the government farcically tried to wedge the Coalition on funding for the NDIS to try and make the scheme an election issue, Abbott called the PM’s bluff, announcing he would support the levy “with conditions”, including a repeal of the impost when the budget returns to surplus (unlikely in the short or medium term).

The Greens believe that the taxation system should allow government to provide an appropriate level of government services. They believe that government has a significant role in managing the Australian economy, including government ownership of natural monopolies, government intervention to prevent market failure and government borrowing to fund long term infrastructure investments.

The Greens supported the review’s proposals to tax carbon and resource extraction. However, they argued that the government should have increased the taxes on both resources and carbon. In regards to a resources tax, they argued for the establishment of a sovereign wealth fund. The Greens also supported recommendations in the Gonski Review to increase welfare programs, particularly support for students and jobseekers.

The Greens also want to introduce a new top marginal tax rate of 50% on incomes of $1 million or over.

The party is fully supportive of the NDIS levy.

Click here for some key background reading on the parties’ tax policies. 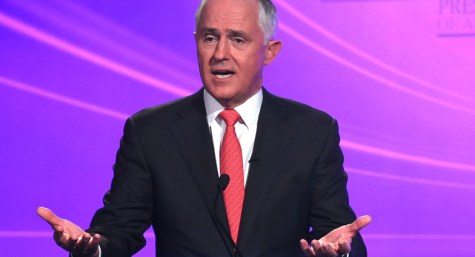 the Liberals are so lazy they haven’t updated their tax policy documents since the last election! And they may sail into government on MSM support!
I despair…

One Coalition policy really caught my eye: imagine getting a “taxation receipt” that provides details of how my taxes have been spent!
Soon I’ll have REAL FIGURES to quote every time I vent my outrage at contributing to slag single mothers and all those lazy dolebludgers etc! It will be that much MORE enjoyable!
Who knows, they might even be SO detailed that I’ll be able to single out indivduals for a personal bashing!
What a game-changing innovation!
Roll on September!

[After the government farcically tried to wedge the Coalition on funding for the NDIS to try and make the scheme an election issue, Abbott called the PM’s bluff, ]

Err..cough. I call BS on this one. There was nothing “farcical” about it. Just a rather deft piece of work by the PM to cement the NDIS in place.
Worked a treat and now it’s being spun in the media as a victory for Abbott.
I expected a bit better from Crikey.