Fin Review TV tops Kohler. As debut programs go, Financial Review Sunday, Nine’s new TV program in partnership with The Australian Financial Review, wasn’t bad. The story on Coles CEO Ian McLeod could have been longer and contained fewer pictures and more interview with a man who remains a TV enigma to many people because of his usually low profile. The interview with Rio Tinto’s Sam Walsh was the usual old song and bluster about costs, cost cuts and iron ore prices.

The Rear Window gossip bit at the end with Joe Aston was a good idea. The test of the Rear Window column will be when Aston takes a poke at his own employer (Fairfax Media) or a major business — say the program’s sponsor, Westpac. Having a lash at Treasurer Wayne Swan or former Qantas CEO Geoff Dixon was easy … 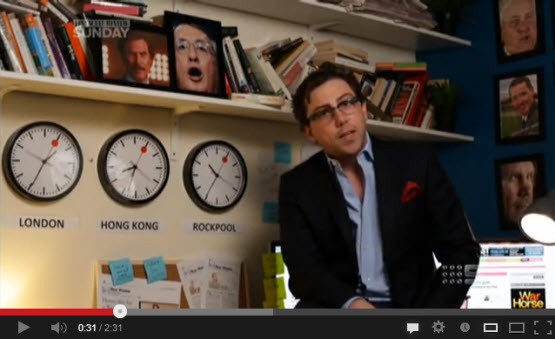 Fanning flies coop. Current affairs veteran Ellen Fanning has left Graeme Wood’s philanthropically funded website The Global Mail to front a new interview program for SBS. The Observer Effect, to air on Sunday nights from June 2, will feature hour-long interviews with politicians, authors, academics and other public figures. Fanning’s move follows the departure last month of Asia correspondent Aubrey Belford who left TGM to start a gig as a south-east Asia correspondent for Reuters. Both Fanning and Belford were rewarded for their TGM efforts with Walkley nominations last year. Global Mail CEO Jane Nicholls tells Crikey she wishes Fanning the best and that she can hopefully file for the site in between her SBS duties. — Matthew Knott

Tensions, what tensions? Still on Planet SBS, managing director Michael Ebeid was none too pleased with an item in The Australian this morning. The Oz suggested Ebeid’s station had thrown a “tantrum” about SBS executive “Michael Finlayson” (his name is Richard) leaving to become the ABC’s head of television and was not allowing him out of his contract. Not so, says Edeid: CFA pours cold water on Hun scoop. Crikey hears journos at Melbourne’s Herald Sun are seriously unimpressed with the Country Fire Authority’s efforts to spoil a story on toxic dam water at a CFA training college. The Hun sent CFA boss Mick Bourke a series of questions on Friday, two days ahead of publication. Instead of waiting to see what the paper wrote, Bourke jumped onto the CFA’s blog that day to predict the paper would “again report false and misleading claims surrounding our handling of the issues at CFA Training College Fiskville”.

The Sunday Herald Sun went ahead with its story and blasted the CFA’s tactics in an accompanying editorial. A Herald Sun insider said: “We think  it was quite extraordinary that they’d go and do that. It flies in the face of accepted practice.”

Sydney PR consultant Brett Clegg has made close to $800,000 on employee options in the booming buy-now-pay-later outfit Afterpay. There's nothing illegal about it, but the optics aren't good.

‘He should be stripped and flogged, the bastard’ … Faine producer leaves … raising shell …

That tense “Oz story”?
To be fair SBS did run that none too flattering first half of that doco on the Munchkin’s Wizard owner, last night? This could be pay-back – watching how he operates from the SBS story?