Funny business: what makes the Comedy Festival so popular?

The Melbourne International Comedy Festival is, by some measures, the largest cultural festival in the country. When did comedy became such big business?

If you live in Melbourne, it would have been difficult to miss the Melbourne International Comedy Festival. The event rolls over the southern capital like a juggernaut, filling venues, decking out trams and infecting Swanston Street with a plague of pestering comedians.

The festival is now over for 2013, and most of the talent have decamped from messy green rooms to their next tour, television shows or rehabilitation clinics. Festival organisers are hard at work reconciling credit card purchases and totting up the attendance figures for the 2013 event. One thing’s for sure: they’ve been busy. On some measures, such as number of paying attendees, the MICF is now the largest cultural event in Australia. This year’s incarnation featured a staggering 5875 performances from 1390 performers across 465 shows. The backstage requirements were daunting, including no fewer than 97 venues across Melbourne, supported by 1210 crew. 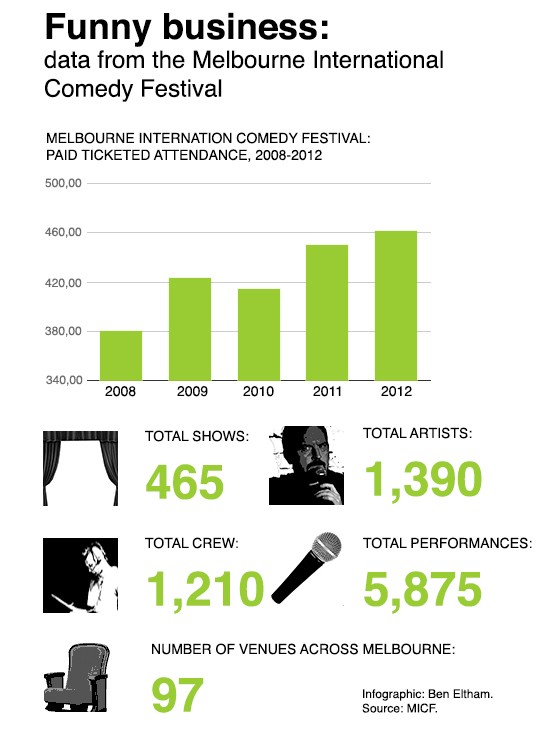 Comedy is big business. The Comedy Festival appears to be benefiting from the growth of comedy itself. Younger audiences love it. MICF director Susan Provan says the festival’s largest demographic is 18-35, with “another really large chunk” between 35 and 45.

That’s great news in the longer term. Academic studies have repeatedly shown that cultural tastes tend to form for people in their teens and 20s. Once someone becomes a fan of an artform, he or she retains that preference throughout life.  “One of the reasons that our audience grows so much is that once they’ve been they always come back, and every year a new young chunk of ‘we’re just 18 and we’re allowed out on our own’ come, so we’re adding audiences at our youth end while older audiences keep on coming,” Provan said.

“If you look at it over the last 30 years or so, comedians have become the faces and the voices of prime-time commercial radio, they’re up there with the rock stars of the entertainment industry,” Provan explained. “It’s comedians that make commercial radio rate, and make a lot of television rate.”

Comedy has also colonised the internet, where the expanding options for artists to reach their audiences directly has allowed relatively “unknown” funny types to build substantial live audiences far from home.

“It’s much easier now to find audiences for overseas guest artists that have never been to Australia before,” Provan said. “Now there are people you’ll bring in, who for whatever reason have had YouTube clips go crazy, and all these people will turn up to see them, and you think, ‘where did that audience come from?'”

The Comedy Festival is also doing better than most at developing that audience base.

“The thing is, we’re cheap,” Provan said. “Tickets to Comedy Festival shows are still, compared to the rest of the entertainment industry, quite cheap, so its accessible. They’re the kind of shows that you don’t have to pay a lot of money for, and you can always get a ticket at short notice. You can rock up to a venue, and you might not get into Wil Anderson but you can certainly get into any number of things that you might not be so familiar with but turn out to be really great.”

The result is a rapidly growing event. Attendance at the MICF each autumn has been growing steadily in recent years. Total box office grew from $9.75 million in 2008 to $12.03 million last year, with 2013 figures on track to exceed that figure. Total ticketed attendance has grown from 380,239 to 461,583. In contrast, attendances across much of the performing arts sector are flatlining. According to MICF general manager Damien Hodgkinson, the MICF is now the largest ticketed cultural event in the country. “And certainly in the top four events in Melbourne, alongside the spring racing carnival, AFL finals series, and the Australian Open,” he said.

For the superstars, demand seems inexhaustible. “You look at some of the Token artists playing at the Princess Theatre, Wil Anderson, Judith Lucy and Denise Scott are playing a pretty big room for the whole festival,” senior producer Gideon James told me. “Danny Bhoy is doing 800 a night at the Playhouse, Kitty Flanagan is doing 1000 a night and you can’t get a ticket.”

For the up-and-comers, it can be a more grassroots experience, as Rose Callaghan detailed recently in a fine article for The Vine. But those participating have at least the chance to reach larger audiences and perhaps build towards a career.

Provan agrees. “People love that thing of seeing Dave Hughes in his first gigs at tiny venues, and then still being a fan now that he does massive venues. People have a great sense of participation in that career path.”

Of course, nothing can grow forever, as Australia’s mushrooming live music festivals sector has recently discovered. Hodgkinson says the festival’s footprint will eventually run up against the limits of Melbourne’s audience.

“I think there will be a limit to how many tickets can be sold, and it will be up to us to look at ways to not let the festival keep growing bigger and bigger as far as events are concerned,” he conceded. “That’s a difficult question though, because you don’t want to deny anyone access to the festival, but you want to make it clear that it’s a competitive environment.”

The media legacy of a forgotten comic’s extraordinarily racist act

This year’s MICF was really well run. Thoroughly enjoyed it. And tickets were cheap as chips.

Had a blast also. The opportunity to OD on comedy over a few days – I saw six acts in three days plus some incidentals – is really great.