The strange politics, and sensible economics, of the NDIS levy

Labor is using revenue writedowns as justification for an unrelated tax increase -- but it's not actually a bad idea. From Canberra, Crikey's man on the strange politics of the NDIS.

At first glance the government’s sudden conversion to an income tax levy to fund the NDIS is a shemozzle, a specialty of Labor’s.

This government has had two opportunities to embrace an NDIS levy. The first was after the Productivity Commission released its final report on disability services in 2011. The PC examined a levy closely and preferred NDIS funding to be sourced from elsewhere in the budget, but a levy was its fallback option, and it ended up focusing on the need to establish a specific fund for the NDIS, which under legislation the government would be required to maintain, either from savings elsewhere in the budget or from new taxes.

An even better opportunity came last year, when state and territory premiers and chief ministers, as one, told Prime Minister Julia Gillard they’d back her if she wanted to fund a NDIS with an income levy. Gillard, having seen what Opposition Leader Tony Abbott had managed to do with a carbon price, knocked them back.

What changed to change the Prime Ministerial mind? Not, surely, as she claimed yesterday, “the amount of tax money coming to the government is not what we expected”? The revelations of further tax revenue writedowns earlier this week has exactly zero to do with funding the NDIS, given it’s a budget problem in the here and now and the NDIS will be years in rolling out. There’s no reason why “structural savings” are no longer appropriate to pay for the NDIS. And in fact, the levy won’t be sufficient to pay for the additional funding eventually required by the NDIS. The revenue might be hypothecated to a specific purpose, but like the Medicare levy, won’t do the intended job fully.

Perhaps it was the politics of presenting the opposition with the stark choice of supporting the levy or having it become a key part of Labor’s re-election campaign, to the extent that anyone within the Coalition is worried about his or her own prospects in September. Abbott’s immediate reaction was an embarrassing media conference in which he refused to answer David Lipson’s repeated questions about whether he supported the levy. This morning he finally dodged Labor’s trap and agreed to support the levy subject to seeing the details, etc, etc. What the heck, Labor will get to wear the odium of a tax rise while Abbott will get an extra $3 billion to $4 billion a year in tax revenue. It’s a no-brainer.

“But in increasing personal income tax, Labor is also … making the tax base less volatile and procyclical.”

However, Abbott and the media were as one in calling for the levy legislation to be introduced before the election. That’s a peculiar position for the PM’s critics, and particularly Abbott, given he has destroyed Gillard over her politically motivated change of mind on a carbon price and failure to take that to an election or referendum. Still, with the opposition for once falling into line, the matter becomes moot.

But let’s go back to those budget writedowns that the Prime Minister claimed were the reasons she’d changed her mind about funding a scheme that won’t be rolled out until 2019. What Labor appears to have done is relied on voters’ confusion over basic budgeting, invoking a shortfall this year as a justification for increasing taxes the financial year after next, assuming voters won’t spot the sleight of hand. To what purpose? Well, to obviate the need to find more “structural savings” in the budget, yes.

But in increasing personal income tax, Labor is also, whether intentionally or otherwise, making the tax base less volatile and procyclical. The additional $3-4 billion per year the levy will raise is only about 1% of Commonwealth tax revenue, but it will marginally increase the overall level of personal income tax compared with company tax, making the overall tax mix less pro-cyclical (update: see below) and volatile.

That’s good, because company tax is far more sensitive to the economic cycle than personal income tax (around twice as volatile, in fact, over the last 20 years), and the government is far more reliant on company tax than it used to be. In 2002, company tax revenue was around one-third of income tax revenue; in 2007, it was around 47% after a succession of personal income tax cuts. In 2010-11, it was still over 46%. Like the superannuation changes, the NDIS levy is a small step toward making the tax base more resistant to swings in the business cycle, even if we’ll never go back to the sort of tax mix we had in 2002.

When the PC originally proposed the NDIS, it recommended it be used to remove inefficient taxes by states abolishing one or two inefficient taxes and the Commonwealth making good the revenue by taking over disability services, using its own more efficient tax base. The levy won’t improve the efficiency of the tax system — indeed it may create disincentives to participation for lower-incomes earners — but it will slightly improve its sustainability, which is a more pressing issue in the long term.

But the PC was ultimately also concerned that if a levy was used to fund an NDIS, it would be a separate levy (the “National Disability Insurance Premium”) and it would provide the full additional funding needs of the NDIS. While the government will establish a separate fund under legislation, it’s simply increasing the Medicare levy, as though disability services are just another part of the health system.

It’s a fine but important distinction that is being lost in the race to establish something that everyone enthusiastically agrees on.

Correction: Ross Gittins correctly points out that describing corporate tax as “pro-cyclical” is wrong and that the effect of lower corporate tax may well be anti-cyclical in terms of impacts on private demand. 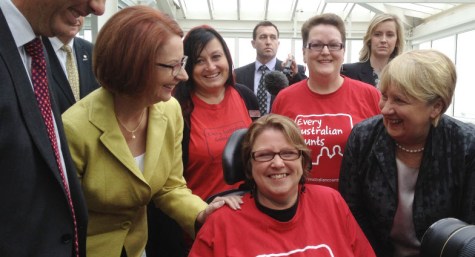 The decision to fund the NDIS through an increased Medicare levy means the government will have to reconsider its decision to exclude NZ citizens legally residing in Australia from coverage by the NDIS.

It was always dodgy excluding a group of people with residence rights in this country from coverage given that their taxes will be paying for it and many have been living here legally for many years, yet are also denied a pathway to citizenship that could allow them to access the service someday in the future.

It is almost unbelievable that the government could seek to hit hundreds of thousands of people to fund a specific service to which they are denied access. Restrictions placed on NZ citizens accessing government services and citizenship in Australia are already straining trans-Tasman relations and were recently criticised by a joint report of the Productivity Commissions of both countries. Blatantly ripping off hundreds of thousands of NZ citizens in the manner proposed would cause very significant harm to the relationship and destroy any prospect of furthering trans-Tasman integration for years to come.

Other than the comment @1 (seems very unfair) I don’t understand why increasing the medicare levy to partially fund the NDIS is a problem. I would have thought it would be politically much harder to create a new tax rather than extending an existing one, subtle difference I know. Maybe someone can explain this?

Always when it comes to funding something it is hit payroll – hit payroll – we need a decent discussion on better ways to tax because getting a job should be a fundamental right for everyone and taxing it should be the last priority. I noticed a list on The Conversation as to revenue raising – cost reduction alternatives that shows that you do not have to look to far to think about alternatives to taxation on incomes via payrolls –

I have listed some of the better ideas

This list is not exhaustive and some points may be debatable but illustrates there are so many better opportunities than increasing unemployment by increasing a tax on wages. If you think there are upward pressures on unemployment now just wait till the super increase hits in July.

did some go ahead and invent optical wifi when i wasn’t looking?

Why does everything be seen through such a complex prism/

The next time Abbott or someone carries on about the PM changing her mind we should ask them if they still hold 100% to their previous positions in all regards. I’d expect apopletic silence…followed by a swift exit.