Monthly ed: we weren’t spun by PMO. The Monthly’s editor John van Tiggelen has launched an email spray at The Australian for claiming the magazine’s latest cover piece — “The Saboteur: Kevin Rudd’s Dirty War” — had “the fingerprints of Julia Gillard’s office all over it”. In his email, obtained by Crikey, van Tiggelen accuses The Oz political […]

Monthly ed: we weren’t spun by PMO. The Monthly’s editor John van Tiggelen has launched an email spray at The Australian for claiming the magazine’s latest cover piece — “The Saboteur: Kevin Rudd’s Dirty War” — had “the fingerprints of Julia Gillard’s office all over it”. In his email, obtained by Crikey, van Tiggelen accuses The Oz political editor Dennis Shanahan of lacking independent thought and says the paper’s coverage of the piece has been “beyond daft”.

Although The Oz has suggested The Monthly was spun by the PM’s office, van Tiggelen asserts there was no contact between the piece’s author, Erik Jensen, and the PMO.  This is the second fiery email from van Tiggelen to a media rival to go public this year. In February, he accused Good Weekend editor Ben Naparstek of being a “dalek” who stole contributors and ideas. — Matthew Knott

This means the overwhelming majority of News Corp shareholders won’t get a vote on what will be the biggest issue of all for the company since it fled Australia for the US back in 2004. That’s democracy, Murdoch style. But you won’t read a word of that in any of the papers in the new News Corporation, especially in Australia, where the papers are big on democracy and threats to freedom of the press by government legislation. So the vote on June 11 is a foregone result. It will be supported overwhelmingly, especially as shareholders see how the idea has boosted News’ shares sharply, helped by the $US10 billion share buyback program (more than $US6.5 billion spent) started in mid-2011 after the UK phone-hacking scandal erupted.

In addition to green lighting the name change, shareholders will be asked to approve the retention of the two-class share system, which allows the Murdoch family to dominate the company through a 39% stake in the B-class voting shares, and no holdings of the A-class non-voters. Holders of the voting shares who are foreigners are restricted from voting their full holdings because the level of foreign ownership is close to US legal limits. The Murdoch family will vote their shares to the extent of their 39% holding (of the voting total) and no more.

After the split, current News Corp shareholders will receive shares in both companies. The 21st Century Fox entertainment business will include the profitable television and film assets in the US, Asia and Europe; new News Corp will contain the newspaper and book publishing assets, pay TV operations in Australia and some digital businesses here. With News Corp reporting its third-quarter and nine-month racing results next week in New York, the documentation for the final shape of the two companies, their boards and financial details will be released soon after to allow it to be circulated to shareholders ahead of the June 11 vote. — Glenn Dyer

House fire now a hate crime? Perhaps The Australian‘s subs were too busy to read carefully on Tuesday, or perhaps the gay marriage debate has just muddled their brains … 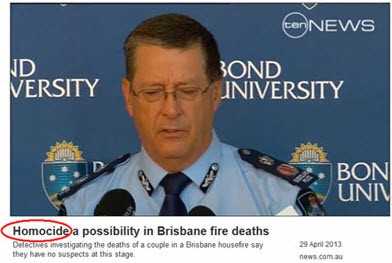 Women’s lit: stellar Miles Franklin list. When the Stella Prize was being founded I remember listening to the debates surrounding the naming of the award. The prize was in some ways emulating what was then still known as the Orange Prize in the UK, and people bandied about humorous names such as the “mango” for our antipodean version. Stella was ultimately chosen because it was a reclamation of the first name of Miles Franklin. “Miles” was a name chosen by the author, like so many female writers before her, to disguise the fact of her gender. To give the new all-female literary award Franklin’s true first name was an appropriate mirroring of the purpose of the award itself — a reclamation of a prize which had gone to male authors far too many times since its founding in 1957.

It’s hard not to see a rivalry between the two prizes now, with the Miles Franklin clearly on the back foot since the accusations of gender bias. The prize money for the Stella is $50,000. Such an amount would have been identical to that of the Miles — a deliberate choice to put the Stella on an equal footing, achieving the equivalent prestige and equally rewarding its winner. But the Miles Franklin’s Trust Company this year increased the prize to $60,000, in what is difficult not to regard as an attempt to remain on top.

There’s been some overlap between the awards too, with Romy Ash’s Floundering , Michelle de Kretser’s Questions of Travel and Carrie Tiffany’s Mateship with Birds appearing on both the Stella and Miles Franklin longlists. There is no question that this year has been a strong year for female writing. Yet, in its announcement of the longlist last month, the Trust Company emphasised the fact that it was dominated by females, claiming that while half the original list of 73 submissions were written by women, this year’s longlist “sees the largest number of female authors selected since the longlist was first introduced in 2005”. — Bethanie Blanchard (read the full story at Liticism)

Front page(s) of the days. It’s peace in Tasmania (in terms of the forests), war in Queensland (over privatisation and the budget). Two of News Limited’s tabloids go large with big state issues … 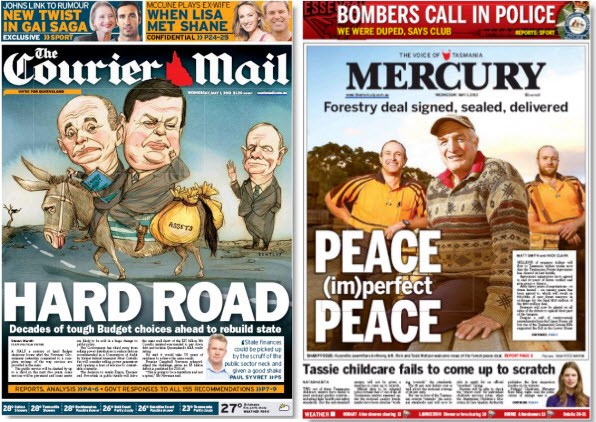 Ever wonder what “independent thought” could do to your future prospects at Limited News?

I don’t know how the hacks at Mudorc’s murky mansions sleep at night. I guess the money makes a nice, soft mattress and the mind control means no dreams or conscience disturbed nights.