It's animals all around for Richard Farmer today. Are we aping Rupert Murdoch?

A pretty pass. So it has come to this: we can’t even trust Disney. The latest Disneynature production was promoted as “filmed over a period of months and under extreme conditions, ‘Chimpanzees’ is a true, one-of-a-kind story that could only be written by nature.” Except it was not written by nature at all. Christophe Boesch,  head of the primatology division at the renowned Max Planck Institute for Evolutionary Anthropology in the eastern German city of Leipzig, participated directly in the filming in the Ivory Coast rainforest as the principal scientific consultant. He has blown the whistle in talking to Der Spiegel:

“What appears to be continuous documentation was actually pieced together, Boesch says. The tough orphan star of the film was played ‘by five different chimpanzees,’ he claims, though a young chimpanzee named Oscar does assume a leading role in large stretches of the narrative.

However, Oscar didn’t lose his mother — nor was he ever adopted by any male chimpanzee whom he didn’t know, as the press kit for the German market claims. A young male chimp was in fact orphaned during the filming and was adopted by an older male chimp, but this animal died in July 2009, a few months after losing its mother.

Boesch attributes this sleight of hand and omissions of fact to the team behind the film. He says that it was their idea to keep silent about the production’s true background in order to ‘not damage the film’s magic’.”

How much can a koala bear? With my faith in animal lovers already cruelly shattered by this revelation about Disney, along comes Phil Davey of Mountain Media with a suggestion that all might not have been right with my cuddly koala picture in yesterday’s snippets. just wanted to flag to you some problems with the image of the koala richard farmer used in his column today. The state forest the photo was supposedly taken in is close to my home and is a pine plantation. You can actually see the darker pine trees in the background to the shot.

Koalas don’t live in pine trees.  His “home” therefore wasn’t just chopped down … he has either wandered over from a nearby native forest or was placed there for dramatic effect (forgive the cynicism) or maybe even photoshopped in.  Definitely a pine forest though.

keep up the good work, Phil”

Now I admit to nicking that photo from treehugger.com which,  I now discover, nicked it from that journal of record The Courier-Mail, which in turn on its website give an acknowledgement to that other paragon of truth, the Sydney Daily Telegraph. And further down the chain my little koala came from www.wires.org.au — the site of the  Wildlife Information, Rescue and Education Service, which does such wonderful work in rescuing and caring for injured animals.

I have asked WIRES how I should respond to Phil Davey but no response yet. In the meantime I pass on this from their original story:

“Woodchip World — Where am I?

This very confused sub-adult male koala was rescued yesterday from the middle of a felled pine forest. He was reported by a concerned man working at the site as he was sitting out in broad daylight on top of a woodchip pile with trucks and machinery working close by. The man called his wife who contacted WIRES.

Our volunteer arrived to this scene and could hardly believe what she was seeing.  He was taken to a local vet and found to have an ulceration in his eye which is being medicated now and should clear up quite quickly and the hope is he can be released soon to an area with a known koala colony nearby.

Another three confused and displaced koalas have been sighted in the same area today, again in daylight which is very unusual. If you are travelling on the Mitchell Highway please be alert for koalas on or near the road.”

A silly question really. Would you rather they paid or you paid? Yesterday’s Crikey report on the latest Essential poll brought us the finding that some 64% of voters favour higher taxes for corporations as a way to increase revenue, the most strongly supported revenue or spending change of those proposed. What a surprise! 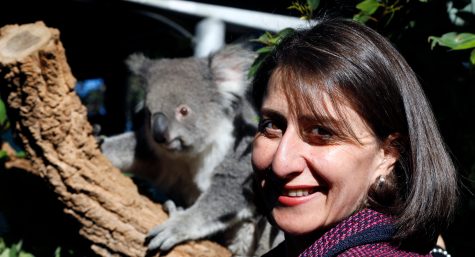 I’d assumed the koala photo was a set up but was employing artistic licence to make a point. Correct tree species aside, it’s a stark visual statement.

I’m guessing Disney’s chimpanzee movie won’t be making use of Jane Goodall’s astonishing work on the chimps in the Gombe Streams National Park in Tanzania.

Good to see you are a feminist too Richard.