It's that time of year again ... No, the snooker world championships. Our man in England has it covered, from Aussie hope Neal Robertson to the celebrated comeback of Ronnie "Rocket" O'Sullivan. 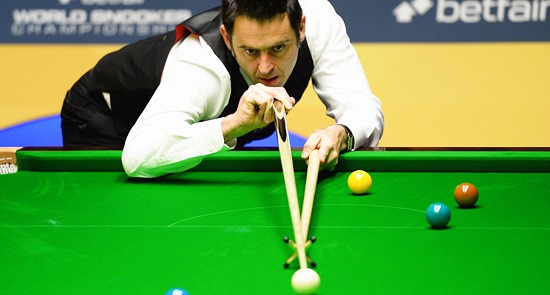 Rocket Ronnie’s back! Yes Ronnie O’Sullivan (pictured), the Bradman-Comaneci-Martin* of snooker has returned after a year or so off the circuit, after stating that he was bored. Well, last week he bored through opponent Marcus Campbell 10-4 in the opening round at the Sheffield Crucible, opening with a game-winning 82 break, heavy on a red-black triple before widening out to … and I’ve totally lost you, haven’t I? Or maybe not. Yes, it’s time for my very occasional snooker column, as the world championships break once again.

Yes, snooker. Not merely the greatest game of them all, but the greatest sport of them all, a tournament in which all human life is here, a dual between intention and chance, between youth and age, between skill and temperament. The only sport where you can see the spirit of a losing player leave their body and float over their table. Where a 25-year-old champion gets to the second round by eviscerating a 55-year-old who was world champion before his parents met. Where the collywobbles is not an aberration, but the general condition; every player stumbling at the brink of triumph. Where … well, you get the idea.

This world championship is notable not only for the return of the Rocket (whose 1997 five-minute maximum break is long remembered) but for the hopes pinned on Neal Robertson, the “Melbourne Machine”, strange lurching love child of Julian Assange and Eddie Perfect, simultaneously a master of the long shot, the power shot and the fast game, and still the player most likely to play a shot that wouldn’t pass muster between two theatre arts students at 3pm in the Clyde Hotel. Alas, this year that happened again. Robertson, the world number two, found himself in a frame-by-frame tussle in the 19-frame match, which reached 8-8 in the early hours of the morning.

The Machine nearly clawed back the next of these from 50 points behind with only 30 on the table, with three snookers in a row, but later decisively shot himself down by potting the white, distracted like someone had just put Khe Sanh on the juke or something. He looked stunned to lose, and on Anzac Day of all things. Not saying nothing, but we shot the Breaker for less than that. It’s a damn shame, because an O’Sullivan-Robertson final would be like a clash of the titans. But the main game is always between Neal Robertson and Neal Robertson, which is something sportswriters say.

“The table, cue, balls, they’re all just there to distract you from the mind-meld battle.”

In part, Robertson was also losing to a better narrative, as his opponent was Robert Milkins, closing in on 40, in the top 10 in the early 2000s, before crashing and burning, at one stage by his own account being near homeless. He had already stunned the snooker world by beating Jimmy Higgins out of a spot to qualify. Higgins, a squat balding man known as “the Hurricane”, had first played in a world championship final in 1982. Beating him was like backing over someone’s granddad.

But in a tournament that has almost more character than it can take, the most stunning performance has been by Thai player Dechawat Poomjaeng, a world championship first-timer who knocked veteran Stephen MacGuire out of the contest. But it wasn’t the what but the how. By now, the “world” — i.e. British plus occasional colonial — snooker championship has become used to the Chinese players who now fill out the ranks of the top 50. But the Chinese players have the same reserve as British players — a sort of mild persistent depression which comes from practising topspin shots in a shed all day.

Not Poomjaeng. He’s from a Buddhist culture, which in these matters is like being from the Pogues. He jumps around, groans at bad shots, applauds his own good ones, and sits out his opponent’s turn with a serene smile, even when he’s being sliced up. It’s a game, after all, and he sees no reason why he shouldn’t play. Poomjaeng’s style not only shows the cultural assumptions at the root of how you play a game — the seriousness is a transfer of attitudes from serious stuff, surgery, war, etc, to the frivolous and joyful — it has the zen effect of dispelling stress after each shot.

After all, by the end of an eight-frame session, most players are falling apart with stress, second-guessing, and lost-shot-remorse. For Poomjaeng each shot is the first. Amazingly I did not gain this theory from the commentary by the two ancient players susurrating commonplaces from the commentary box, and who couldn’t begin to get a handle on Poomjaeng, gently patronising him until he started winning, at which point they were lost for words, although occasionally pulling each other back from the brink of racism (“I think perhaps he’s Thailand’s Mr Bean”; “Oh I’m, er, not sure about that, Terry”). When he lost badly to Michael White, they went back to patronising him again.

It’s a pity he’s out, because a Rocket O’Sullivan-Poomjaeng final would be a sight to behold. Ronnie is already skittish — he has quit the game twice, been treated for depression, converted to Islam, and drapes a cloth over his head when he’s off table so the cameras can’t track him. I do think Poomjaeng would have won by reducing him to a shrieking nervous breakdown. But that’s snooker at its best. The table, cue, balls, they’re all just there to distract you from the mind-meld battle.

Nevertheless, it’ll be just our luck if the final is Ronnie and Graham Dott, the grinder of all grinders**.

*Kevin Martin, the greatest ever curler

Suddenly I’m interested in snooker…if only to see Rocket Ronnie skulking under a towel.

Not actually a snooker tragic but even I know it was Alex “Hurricane” Higgins (now deceased – a tragic George Best-like demise but without as much money or women) and it’s Jimmy White who’s currently still playing and was beaten in qualifying. By the way, Higgins did win in 1982 as a rather quick check of Google does reveal.

Really Guy, I do agree with you about 85.7 per cent of the time but one shouldn’t purport to be a huge fan of a game if you can’t even get the names of the acknowledged greats right. In these digital days of obsessed fanboys and media commentators hoping to discredit people in their undergraduate culture wars you need to get the simple facts right or they might try and discredit your whole oeuvre.

Your best excuse might be that the whole piece was a complete piss-take.

So educational – I’d never have known who the world’s greatest ever curler was without reading this article!

arrggghh dammit Jimmy White ‘the Whirlwind’ lost to Milkins. Yes Higgins is ‘the hurricane’. Simple 3am transposition. you’re building a lot on a little, eggleton