Did the Citizens Electoral Council buy your email address?

Fringe political party the Citizens Electoral Council has a history of emailing people who have never requested to be on a mailing list. How did it get these details? Student journalist Michelle Slater investigates. The Citizens Electoral Council has been accused of harvesting email addresses or buying them from third parties, as people who have never provided their details to the fringe political party have received numerous emails and the occasional phone call from the group.

The claims highlight the fact that registered political parties don’t have to abide by some laws on spam, or the “Do Not Call Register” rules.

The CEC is based in the inner-northern Melbourne suburb of Coburg and was formed in 1996. It was briefly de-registered by the Australian Electoral Commission in 2006. It is based on the principles of US economist Lyndon LaRouche, who was jailed for tax fraud in 1988. The CEC campaigns on climate change scepticism and conspiracy theories about the British royal family. In the 2010 federal election it secured 0.06% of the vote.

Melbourne IT consultant Kelvin Eldridge says he received several emails titled “Wind ‘power’ is a fraud” from the CEC in the lead-up to the last federal election. “I requested that I didn’t get their stuff, but they still sent it. I previously rang the organisation, and if I recall correctly they used a third-party mailing list,” he said. “I didn’t provide them with my email address, and I suspect it was harvested in some way. The CEC could also have purchased a list from someone containing hundreds of thousands of email addresses.”

Moreland Socialist Alliance councillor Sue Bolton regularly receives spam from the CEC. “Every time I look at my junk-mail box I have some from them. Even when I click ‘this is junk mail’, it keeps coming.”

Bolton has no idea how the party got her email address; “I’ve never signed up to them”. She said they phoned her about a month ago. “It was a cold call. I think it was something to do with the elections. They asked if I wanted to find out about the Citizens Electoral Council. I didn’t know how they got my number.”

CEC media spokesman Robert Barwick dismissed concerns: “They are just internet junkies having a cry about their in-boxes. You can tell them that from me if you’d like.”

He says he “can’t explain” how people kept getting emails after asking to be removed from the mailing list. “It’s a minor stuff-up. We do not want to send emails to people who don’t want them. If they request to be taken off our email list, we take them off,” he said.

The CEC gets its email addresses through referrals from subscribers, Barwick claims. He denies they use third-party contacts. “People who know people will share our contacts,” he said. “We do not spam. We are sending out news, and even if it was spam, political parties are allowed to under the Spam Act.”

Registered political parties and candidates are exempt from the Spam Act and are not required to provide a functioning unsubscribe link. They are also exempt from the Do Not Call Register Act. However, they must comply with legal calling times.

The CEC plans to send out about three emails a week between now and the September 14 federal election. “We send them to everyone with an email address, members of Parliament, the media,” said Barwick. The Australian Communications and Media Authority regularly receives complaints about emails and the occasional phone call from the CEC.

CEC leader Craig Isherwood has twice contested the safe Labor seat of Wills, which has been held by ALP stalwart Kelvin Thomson for 17 years. In 2010, Crikey reported Thomson had complained to the AEC after the CEC posted unauthorised electoral material about him around the electorate.

Thomson declined to comment on the CEC’s email campaigns as he “doesn’t intend to give them any attention or publicity”. “The CEC are a frightful organisation which makes all manner of outrageous and unsubstantiated allegations. I therefore do my best to ignore them,” said Thomson. 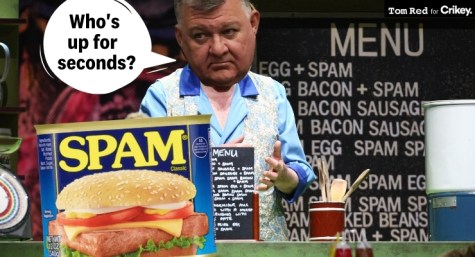 What is spam and where does it come from?

Spam canned? Not if you’re in a political party like Clive

The CECA are as mad as cut snakes. A couple of examples: Citizens Electoral Council v. Ross Garnaut and their handout The New Citizen at the recent Melbourne Community Cabinet “Prince Philip and Queen Elizabeth II have openly, repeatedly proclaimed their intent to kill some six billion human beings, in order to consolidate permanent, worldwide British imperial rule.”

They got my email address somehow too but I let them in because about 1 in 20 are so over-the-top crazy there’s more laughs than First Dog – and that’s saying something. Even if Prince Philip and his wife are not really functioning, active war criminals, I’m pleased Craig and his crazies are keeping an eye out on the far right flank.

Kevin Rennie, thanks for that handy info about ERII and her consort. This is an example of what happens when you leave the room before she’s finished the Christmas message, you can miss important stuff.

Coincidentally, a few minutes ago I received an unsolicited group email from The Ruddster.
Not sure how he acquired my contact – in the past I’ve written to him but the letters revealed merely a postal address.

Like clockwork, CEC are on the ball today, landing this in my in-box at 4.29pm:

“Citizens Electoral Council leader Craig Isherwood has today given a half-hour interview to LPAC-TV in the U.S., on the history of the British Crown’s green fascism, and the CEC’s political fight in Australia to defeat the green agenda.
Crikey forgets CEC contact details
Niche web daily Crikey.com.au today reported on the CEC’s free email media releases, but forgot to provide a link to where people can register to receive them.
CEC spokesman Robert Barwick said he was sure Crikey simply forgot to add the important detail to its promotion of the CEC’s emails, just as the aspiring reputable news service forgot to identify themselves when they interviewed him, claiming to be a student researching for an assignment.”

Did our boundary rider meet theirs at the precipice?

This ugly bunch has been doorknocking businesses in Fyshwick, Canberra. Schtick is about bringing back the Glass-Segal act, er, why campaign in Australia for US legislation? Then they drop off New Citizen – yep, they’re mad as cut snakes.