The long campaign to provide Australian women with access to medical abortion will near an end today -- but what will an Abbott government do on RU486?

But listing on the PBS isn’t automatic — the net cost implications to taxpayers of listing additional drugs are subject to vetting by the Department of Finance, and major new additions need cabinet approval.

Net cost shouldn’t be a hurdle for RU486: the wider availability of medical abortions is likely to reduce the use of surgical abortions, which are more expensive.

Last August, the Prime Minister spoke of her government’s support for women’s health and women’s right to choose. Plibersek has also directly expressed support for listing.

RU486 was registered by the Therapeutic Goods Administration in August last year after an application by Marie Stopes International. Until 2006, then health minister Tony Abbott had prevented its registration under amendments to the Therapeutic Goods Act by anti-abortion senator Brian Harradine. After those amendments were removed, Abbott was unable to stop the limited use of RU486. However, according to a pharmaceutical industry executive, Abbott and his office threatened reprisals against any pharmaceutical company that tried to import the drug — claims Abbott strongly denies.

One of the myths peddled by anti-choice advocates is that RU486 will increase the number of abortions. That was a line repeated in the media today. But RU486 only increases the number of abortions performed early in pregnancy, as more women have access to medical abortion rather than having to wait to access surgical abortions, which for many women outside major cities can be significantly more difficult. In fact, the availability of RU486 is particularly important for women in regional communities, where access to abortion services, like all other medical services, is more limited.

The other myth is that it is harmful to women, which also got a run today from the Australian Christian Lobby. Anti-choice advocates have long relied on the alleged health impacts of RU486 to try to ban it, and Harradine cited these myths when he successfully amended the Therapeutic Goods Act. But medical abortion has been approved by the Australian Medical Association, the Royal Australian and NZ College of Obstetricians and Gynaecologists and the Rural Doctors Association, and the drug itself extensively investigated by the Therapeutic Goods Administration. About 50 countries allow access to the drug.

The listing will put more pressure on Abbott and Peter Dutton to clarify their views on reproductive health under an Abbott government. Abbott has been at pains to indicate that he would do nothing to undermine women’s reproductive choice, in an effort to counter Labor’s unsubtle campaign to paint him as a misogynist. Dutton, who most voters would be surprised to learn is opposition health spokesman, has been even less visible on the issue than he has been on everything else in his portfolio. Dutton simply refused to say anything when the TGA registered the drug last year, although conservative Catholic MP Christopher Pyne repeated the canard about it being dangerous.

Abbott has offloaded much of his ideological baggage since becoming leader, understanding that he needed to become more moderate, particularly on gender issues, to maximise his electability. Whether that extends to his government maintaining funding for RU486 on the PBS established by Labor remains to be seen. 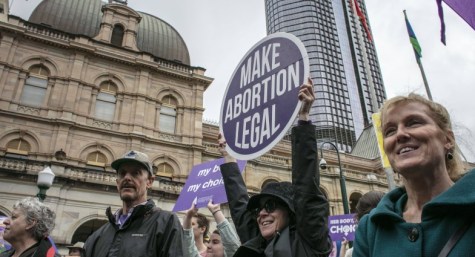 is true then it means Abbot lacks the courage of his convictions and thus is unfit for high office.

However I suspect it is not true. He is just hiding his true self from the electorate.

For example on the issue of Gay marriage he said it would be an issue for the party room after the election. Why is he allowed to dodge the issue? Won’t the party have a meeting between now & the election. Why can’t the electorate know what their stance will be? Can’t they make up their mind.? Why can’t they say it will be a conscience vote? The govt should introduce the legisaltion, or allow a private memeber bill to be introduced before the election just to see what would happen.

My beleief is he is saying it will be an issue for after the election to allow the inference that there will be a conscience vote but if they win , as seems likely, I will guarantee Abbott will NOT allow a conscience vote.

Why is he not challenged on this but allowed to slide or more accurately slither away.

Tony Abbott might have ‘offloaded much of his ideological baggage’, but he will have parked it somewhere readily available, and will access it as soon as he’s in power.

In 2010 TA vowed he’d do whatever it takes to gain government. If that means not opposing Plibersek’s stance on RU486 as a blatantly obvious ploy to glean extra female votes then we can expect him to stay quiet. For however long it takes….

He should be asked, directly, whether he would rescind the RU486 decision, yes or no.