Ask the economists: would SEZs tune our three-speed economy?

It's now a three-speed economy, with Tasmania and South Australia falling behind mining states. Crikey intern Kylar Loussikian asks whether special economic zones would help mitigate the effects of the boom.

Economic growth and other indicators led CommSec to conclude Australia had a three-speed economy. CommSec’s chief economist Craig James says there may be a case for extra government assistance to the laggards. “It may be special payroll taxes that are required, it may be a special economic zone,” he said. 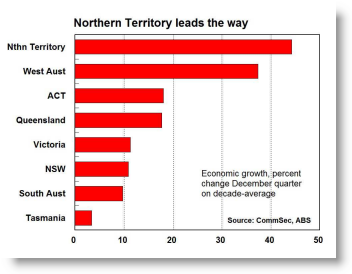 This is not the first time special economic zones have been suggested as a solution to uneven growth rates. The mining lobby has been advocating for a special economic zone in northern Australia through its Australians for Northern Development and Economic Vision since 2010. The plan was seen by some as an attempt to benefit Gina Rinehart and other magnates by providing tax breaks and loosening regulations, but The Australian‘s Adam Creighton said it would create “a vibrant, dynamic, populous northern Australia“, a future less “hamstrung by taxes and regulations more suited to Sydney and Melbourne”.

Meanwhile, a NSW government committee discussed — and dismissed — a special economic zone for regional and rural areas last year. The proposed zones targeted disadvantaged regions where investment was not forthcoming. Although some high-growth regions were also considered, the report was most interested in zones in the Barwon-Darling region, on the central coast, and in Narrandera, with the aim of attracting industry and skilled workers.

The committee, chaired by Liberal MP David Elliot, concluded special economic zones were unnecessary. The committee was not convinced financial or tax incentives would provide a long-term solution for regional economies. There was concern new zones would create artificial borders.

So, would special economic zones in the underperforming states be a good idea, helping them overcome the problems caused by the terms of trade and high dollar fuelled by the cashed-up mining industry?

John Quiggan, an economist at the University of Queensland, told Crikey special economic zones are a terrible idea. “In the Australian context, they are a cover to allow ‘free market’ groups like the IPA to lobby for handouts to their financial backer, Gina Rinehart,” he wrote.

This scepticism is shared by James Giesecke and John Madden at Monash University’s Centre for Policy Studies, who spoke to Crikey jointly in a conference call. They said disparate economic growth rates had been apparent for decades and that long-running structural changes were as important as the effect of the mining boom in the fortunes of states like South Australia.

Madden said special economic zones would reintroduce a program of industry assistance that would effectively unwind two decades of microeconomic reform in this area. He said setting up special economic zones wouldn’t raise regional growth rates significantly. “The most significant problems [in South Australia and Tasmania] are the attractiveness of investment, and greater still, the terms of trade pressure from mining,” he said. A more effective mining tax would have eased the damage done to manufacturing states by slowing mining growth.

Establishing special economic zones could increase industrial output in slower states, but competitiveness would still be an issue, Madden said. A high dollar would prevent the increased output from being internationally competitive. It would also be difficult to compete with imports made more affordable by that same high dollar.

Giesecke said policy makers would be “well-advised” to steer clear of special economic zones and other attempts to encourage economic activity in specific regions. He said state politicians liked to see their states growing quickly, but interfering would hold the whole country back.

“The regional element is a bit of a distraction. It’s just an expression of structural change, and we shouldn’t stand in the way of such change. We’d be forcing people to stay in regions where there aren’t the same opportunities as in dynamic regions,” he said.

If Rudd’s a slave to opinion polls, then surely he’ll back down on RSPT

Sorry, but when it comes to tax cuts, modelling ain’t evidence