Front row or death row: Chrissy Amphlett was the first and the best

Chrissy Amphlett blasted the door open for women who didn't want to be demure. Her legacy in Australian rock will live on long after her death from cancer yesterday, writes journalist (and fan) Andrew Stafford. 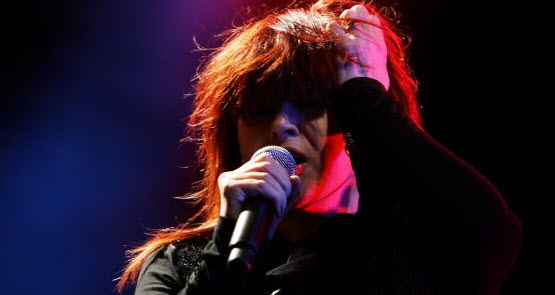 Chrissy Amphlett was a beautiful woman who was unafraid to be ugly. That was what I loved most about her; it was what made her such a riveting performer, as well as a genuinely intriguing personality. Fully aware of her sexual power, she nevertheless confronted her audience with songs that spoke frankly of love as a co-dependent act of submission, and occasionally of subjugation — even, sometimes, of humiliation.

But most of all, desperation. The Divinyls’ first album was named Desperate. Pleasure and Pain — written not by Amphlett or her co-pilot, Mark McEntee, but by proven hit-makers Holly Knight and Mike Chapman — was the perfect vehicle for her: it was the tension between the vulnerability of the song and the unearthly presence of those uniquely phrased vocals that made Amphlett great.

Most of the best Divinyls’ songs utilise this dramatic tension: Boys In Town; Casual Encounter; Only Lonely; Elsie; and the band’s truest masterpiece, Back To The Wall. For all the tough rock-chick talk, Amphlett bled on record, and on stage, as freely as anyone. The difference between her and the vast majority of other female singers was that if you hurt her, she was gonna hurt you back. Hard.

On stage, especially earlier in her career, she would throw shapes calculated not to titillate or to tease but to shock, offend, outrage and frighten. It was potent, sure, but it was also uncomfortable and confusing, because Amphlett didn’t allow herself to be easily assimilated. Her act, exemplified by her wearing a school uniform with torn fishnets — a metaphor for defiled innocence — was a contradiction. Hunching her back, screaming with the primal force of a cornered animal, she presented herself as damaged goods, and was convincing enough to make you wonder if you might in some way be responsible.

From all accounts, she was as insecure as any performer. And maybe, as she grew older and presumably more at ease with herself, she also became more comfortable with expressing her sexuality in a more conventional way; both in her lyrics and in the band’s videos. Or perhaps that was a price she was prepared to pay for the band’s success in the age of MTV.

Sure, I Touch Myself may the best song about pushing the hot button ever written, but still, I preferred the earlier, more challenging version, back when Amphlett didn’t wear make-up, and her haircut was more severe. Back when she bared her teeth — knowing they were jagged, and that there were gaps in her smile. Were the Divinyls getting started now, a manager or record company lackey might have told Amphlett to get that smile fixed.

I’d like to think she would have told them to go f-ck themselves.

If you never saw Amphlett and the Divinyls in full flight, this performance of Elsie — wherein Amphlett inhabits the body of the song’s subject with unhinged authenticity — captures her at a peak of provocation. Here, a lipstick is used not to accentuate the beauty of that famous pout, but as a tool of self-loathing; something to be smeared like dirt, instead of applied as polish.

Amphlett once spoke of performing as “front row or death row”: whether you were male or female, there was no point being up there if you weren’t going to let it all hang out. In America and England, Patti Smith and the Pretenders’ Chrissy Hynde had already blasted open the doors for women who didn’t want to be demure. In Australia, Amphlett was the first, the best and, for a long time, the only one of her kind. And perhaps she always will be.

*This article was originally published at Andrew Stafford’s blog Friction

Razer’s defence of Triple J: it’s all in the mix, and the kids like it

More than a muse, a hero of her generation, and a godess who walked the Earth,

“Hunching her back, screaming with the primal force of a cornered animal, she presented herself as damaged goods, and was convincing enough to make you wonder if you might in some way be responsible”

Hell yes, exactly! She was brilliant and truely one of a kind. My heart broke a little when I heard.

Agree with HH and Eccles – Chrissy Amphlett was fantastic – I loved her honest, direct, rawly s*xual, strong and yet vulnerable persona, not to mention the beauty of her vocals and her pout. My heart broke a little too…

I saw Chrissy Amphlett at the outdoor Nerara festival in 1984- the Divinyls had to be scheduled to later than was posted as Chrissy Hynde of the Pretenders (who were headlining)had refused to play on the same stage on the same day as Chrissy- very small of her I thought and I never played Pretenders again, but it was a glimpse into the power plays of rock’n’roll and a mark of the grudging respect (and fear) the Divinyls were creating.

Yeah I was at Narara too (I still remember the survival kit they sold there on the fringes Lol!). I didn’t mind the Divinyls music, but it was a bit mainstream for me. I preferred the Gurus, Scientists, Birthday Party etc but she was an echo of Chrissy Hynde who had huge street cred at the time for us teen girls who loved live music. The thing I couldn’t ever get my head around was the outfit. It seemed purely for the boys and even to this day the Sailor Moon getup appeals to men (especially Japanese!) more than any ‘girl power’ she could evince. Compared with Ms Hynde who dressed like the Ramones, Ms Amphlett seemed more of a Countdown friendly creation, more Cold Chisel pub rock than grungy/punky rock.
I actually got to meet her face to face when my flatmate picked her up one night (about 5 years after Narara) and she came into my bedroom looking for the toilet, completely starkers! Great dinner party anecdote.
She certainly was memorable!