Australia is getting a new pavilion at the Venice Biennale, largely funded by private donors. But very few of us will ever see it. The rich are spending more on art, but do we really benefit? 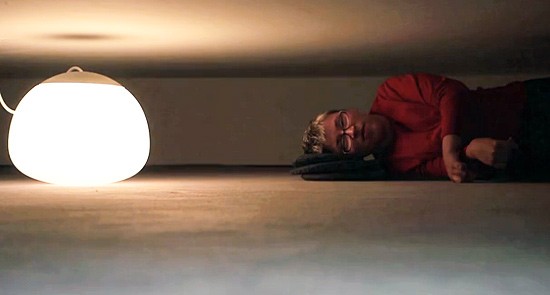 I was in Sydney for 13 Rooms on the weekend. This impressive exhibition (or is it a season?) of performance art boasted reconceptions of some of the more iconic examples of the genre from recent decades, including Damien Hirst’s twins project (Hans, Georg from 1992) and Marina Abramovic’s storied Luminosity, first presented in 1997.

One of the most impressive aspects of the show was its fit-out, scattered around the capacious interior of Walsh Bay’s Pier 2/3 (Laura Lima’s Man=flesh/Woman=flesh – FLAT pictured above). The 13 small spaces are confined, even claustrophobic, especially with a score or more of art-lovers jammed in beside you. It makes for an oddly intimate and resolutely interactive experience. It was particularly impressive the way young Brisbane duo Sarah Clark and Nicole Beaumont handled the teeming masses and athletic challenges of their plinth sit.

13 Rooms is also impressive because of the scale and nature of its private support. The Kaldors have long been pioneers of art philanthropy in this country, but the scope of the giving required to produce a show of this size and ambition is admirable. It underlines a developing trend that has only strengthened in recent years: bigger and bigger shows are being financed not by governments, but by rich people. Visual art appears to be returning to its Renaissance past as an artform dependent on patronage.

Today’s announcement by the Australia Council of a new pavilion at the Venice Biennale is solidly in keeping with the trend. The new building, to be designed by Denton Corker Marshall, has won more than $5 million in private support, joining a lazy $1 million kicked in by Arts Minister Tony Burke. Those who’ve contributed are a who’s who of Australia’s elite. According to the Australia Council:

“The private fundraising efforts for the new pavilion have been led by Australian Commissioner for the 2013 and 2015 Venice Biennales, Simon Mordant. Following an initial pledge of $1 million, the Mordant family increased its commitment to $2 million after seeing the selected design for the Pavilion.”

According to Burke in a statement:

“Australia’s creative and philanthropic community has once again shown a willingness to support iconic works that symbolise Australia’s artistic creativity on a global stage. The Australian government is pleased to partner with the many generous private supporters who have contributed to help this vision become a reality.”

Also chipping in are the Belgiorno-Nettis family — heirs to the Transfield fortune — as well as Allan Myers and Maria Myers, veteran art donors Andrew and Cathy Cameron, the Nelson Meers Foundation and the obligatory “anonymous donor”. Even Malcolm and Lucy Turnbull have got in on the act.

There are consequences of this trend. As art values continue their irrational climb into the high-net-worth stratosphere, cash-strapped public galleries are being sidelined. The art world has never been the most democratic place, but the new reality is increasingly coming to resemble the international plutocracy of Russian oligarchs, Wall Street hedge fund managers and east Asian entrepreneurs.

The philanthropic scene in Australia is decidedly less globe-trotting than this. On the other hand, they’re hardly down to their last 20 bucks. Those of us who applaud art philanthropy sometimes forget that the prerequisite of donating a million dollars to an art pavilion in Venice is a paid-up membership in Australia’s 1%.

And let’s remember that everyone who donates to things like this is also supported by the taxpayer. That’s because cultural philanthropy enjoys a tax deduction. Where high-net-worth individuals are writing off their income using donations such as this, there is, in effect, a subsidy from all the other taxpayers. On some measures, this subsidy is bigger than the amount of money the federal government directly invests in culture and the arts.

The new pavilion will no doubt be stunning. The angular, clever Melbourne Museum is one of my favourite public buildings in this country. DCM’s reputation might have dulled slightly in recent years, but its famous antipodean post-modernism will slide effortlessly into the Biennale garden which is after all a riot of different designs. But it’s a pavilion that most Australians will never see.

Am I being a philistine to advance such views? That’s one interpretation. Another is that I’m attacking the art privileges of the elite.

Definitely a philistine in this case.

The rich have always funded art for themselves, as we know. The situation at the moment, though, is that “the rest of us” can create and disseminate our own art as well. In short, we don’t miss out if we create our own art and our own culture.

“Starving in a garret” has a purpose – it gives a praeternatural light to the world and concentrates the mind on the only worthwhile purpose, to create something. Eating & stuff is irrelevant to a true artist.

“A pavilion most Australians will not see”. Just as most British don’t experience the British Council, such is the way with anything that is internationally focused or in the realm of soft diplomacy.

Yes Ben, you’re a philistine with this one.