Sisters do it for themselves at the inaugural Stella Prize

Women don’t race against men and they don’t box in the same ring, but they do compete in the same cooking and singing shows. So why should women have their own, segregated writing prize? That was the question that hovered over the first Stella Prize, awarded last night in Melbourne — a prize “celebrating great books by Australian women.”

It’s a question that’s been addressed incessantly since the Stella was announced and was also answered in passing by a judge on the panel, Kerryn Goldsworthy, the guest speaker, Helen Garner, and the winner herself, Carrie Tiffany. But the answer is in the numbers, and is implicit in the name of the prize and its catalyst counterpart. Austtralia’s most prestigious writing prize, the Miles Franklin Literary Award, was named in honour of the author of My Brilliant Career (1901), who felt she had to suppress her gender specific given names to be taken seriously. In the 55 years of the Miles, only nine women have won it. As last night’s winner put it, the Stella reclaims Franklin’s female authorship.

The stop-the-press moment was when Carrie Tiffany announced in her acceptance speech that she was giving away $10,000 of her $50,000 prize to her fellow five shortlisters. She said: “This in some way reflects that the Stella is an opportunity to do something differently … I’ve experienced tremendous generosity and support from women in Australian publishing and literature; it’s a way of honouring the many rather than the few.’’ For a writer (average income of authors: $11,000 a year) that is a breathtaking bit of generosity. Money buys time — Tiffany said with understated grace, if I can hasten their work, why wouldn’t I?

In her speech Tiffany also thanked many women writers whose sentences had helped her form her own. And the judge Kerryn Goldsworthy acknowledged and thanked four legends of Australian writing, sine qua non: publishers Hilary McPhee and Diana Gribble (McPhee Gribble 1975-1989), and two of their authors, Helen Garner and Drusilla Modjeska.

Garner: The Pain of Competition

Helen Garner’s guest speech included an excellent piece of confessional in which she explained how bad it felt to be be shortlisted and not win, including a painfully, hilariously embrarrassing episode from her distant past. Garner attended an award night with newly, naively bought high heels — she thought she had a good chance. Naive because she didn’t realise the winner would have been advised, hilarious and embarrassing because she admitted how she wondered through the dinner if she could manage the heels as she walked up on to the stage. Painful as she told how she put on her good loser’s face, beaming a sincere smile of congratulations at the winner.

And how, when she first started writing non-fiction, she was no longer considered for awards, and how she felt when she saw her award-absence in the papers — her “guts fell down an elevator shaft.” It was a great, typical Garner* move: telling small-scale, humiliating personal anecdotes that illuminate the depth of vulnerabilities we all possess.

I had a conversation with the author Jacinta Halloran, shouting at each other over the hubbub — we agreed with Garner’s observation that only time can tell which works last, but that we can train a spotlight onto what we think is good right now. And that, with its gender specificity, the day that the Stella Prize is put out of business is a day when women writers can also fully celebrate. And last night’s celebrations were a fine start to that end.

*Garner footnote: On the theme of the feminine ghetto Garner jokingly observed that in the future perhaps a book by a woman, even a novel about death, wouldn’t need to sport a “vase of flowers” on the cover. She meant her novel, The Spare Room, the cover of which featured a painting by moi. As I said, she had cast nasturtiums on me; and I pedantically reminded her that it was not a vase, but a cup. 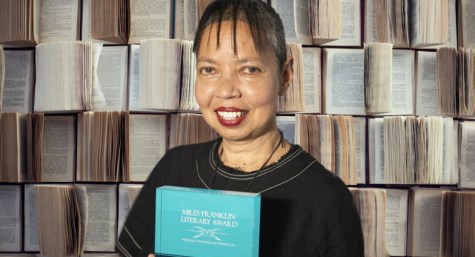