Last night the first winner of the Stella Prize, a new award for Australian women writers, was announced. How did the founders create a $50,000 award in just two years?

As the first book to win the Stella Prize, a new literary award for Australian female authors, the title of Carrie Tiffany’s Mateship with Birds seems particularly apt. Collecting the award last night in Melbourne, Tiffany called her fellow nominees to the stage and announced she would share $10,000 of the $50,000 prize money with the other shortlisted authors.

“This in some way reflects that the Stella is an opportunity to do something differently,” Tiffany said in her acceptance speech. “I’ve experienced tremendous generosity and support from women in Australian publishing and literature; it’s a way of honouring the many rather than the few.”

The event at the Australian Centre for Contemporary Art was packed with publishing heavyweights and a strong sense of female solidarity. “This model of literary prizes, it’s a pretty masculine model,” Tiffany told Crikey, just minutes after her win. “Whenever we promote one person, other people fall back and I’m not really comfortable with that, particularly not when it relates to writing.” 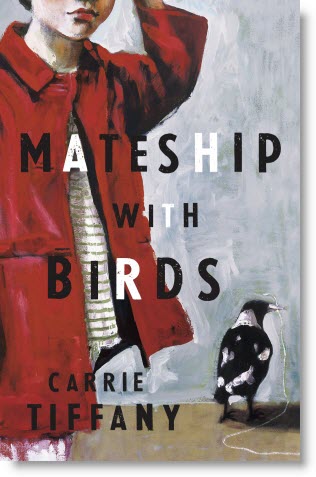 The Stella Prize began, appropriately, in a book shop. The idea was sparked on a panel at Melbourne retail icon Readings with authors Sophie Cunningham, Louise Swinn, Jo Case, Monica Dux and Rebecca Starford in early 2011. The panel was looking at the recently released VIDA “The Count” statistics, which revealed just how few books written by female authors are reviewed in major literary outlets.

The following week a group of female publishing figures (including Cunningham, Dux and Aviva Tuffield, now chair of the Stella Prize) got together to discuss the idea further, inspired largely by the UK’s Orange Prize (renamed this year to the Women’s Prize for Fiction after telco Orange withdrew its sponsorship). The Miles Franklin short list had just been announced — and it was the second in a row in which all authors were men. “That was a big kick starter,” said Tuffield. “We just thought ‘well, let’s start a prize'”.

“It’s not quite as hard as writing a book, but it’s up there,” board member Cunningham told Crikey. It took five years for the Orange Prize to launch after the idea was first raised following the 1991 all-male Booker shortlist. The Stella Prize founders didn’t want to wait that long.

“[We felt] with the coming together of so many debates around representation of women and the way women are treated, and the prize was getting such good publicity, that we needed to take advantage of that, rather than spending five years getting the funding when the debate has missed its moment,” said Cunningham.

First, a variety of trivia nights and other literary events were held around the country to raise awareness of the idea. With a high number of well-known publishing figures involved with the Stella Prize, media attention followed. Corporate sponsors were approached and proposals sent out. Businesses were enthusiastic and supportive of the idea, but reluctant to support an unknown entity.

“Like any other NFP organisation going out and looking for money, it can be tough,” said Foong Ling Kong, a member of the Stella Prize sponsorship committee and a publisher at Allen & Unwin. “We had on our wishlist a bank or a telco but that obviously hasn’t come through. But having said that, I don’t blame them because there’s no track record yet.”

When it became clear that a business was unlikely to sign up as sponsor before the prize had been given at least once, the Stella Prize looked to philanthropists. It was Ellen Koshland, the Melbourne-based granddaughter of jeans mogul Levi Strauss and a well-known patron of writing, arts education, who offered up enough money to make the prize viable.

“If we hadn’t met Ellen, we would probably still be fundraising,” said Tuffield. “She has been so generous and allowed us to shape the prize and just trusted it.” Other major patrons (who pledged between $10,000-$50,000) include philanthropists Joanna Baevski, Lee Liberman, Cassy Liberman and Patricia O’Donnell.

Koshland has given enough money for the Stella Prize to survive for three years. “The worst thing we could do is launch for one year and then go ‘oh my god, we can’t keep it going,” said Tuffield. Now the Stella Prize is looking to see what future funding it can secure, hopeful that it can set up an endowment fund so the prize can be self-sustaining.

“There’s a real window now with all the coverage and all the discussions about the prize, now we need to hit all our targets and see what comes up,” said Tuffield. But the money focus isn’t just on the prize itself. “It’s all about selling the books,” said Cunningham.

Hmmm. Rather than setting up a separate award, shouldn’t we be trying to be more inclusive of female authors in the existing awards? Would an author rather be 1) the best female author? or 2) the best author, female OR male?

Such a lovely story. It brought the odd tear to my fading eyes watching it all unfold on twitter last night. Kudos to all involved. *Fires up Google, buys book.

In (even lovelier)breaking news. Booktopia has just emailed me to say that they’ve sold out of “Mateship with birds”. So I’ll have to wait till next week, when their next shipment arrives.
Go Carrie!

Reminds me of ghetto writing circa 1970s when it was not uncommon for much grant moolah to be lavished on “slim volumes of poetry” from far flung workers’ dormitory ‘burbs.