Emaciated is the new black: Fashion Week models are too thin

It was all a bit emperor’s new clothes to me. When painfully thin models appeared in many of the shows during Australian Fashion Week last week it seemed apparent the fashion industry wasn’t being honest with its models. The truth is that the models were too skinny, and unhealthily so.

The model’s job is to show the designer’s clothing in its best light, yet the biggest story to come out of the week was the shape and size of the models. Most major news outlets reported on the skinny models. If you surveyed the average female consumer I would put money on the fact she wouldn’t be able to list the major fashion trends from the week. According to a report on Cleo magazine’s website, at least one fashion blogger had to photoshop out the angular bones that were detracting from the fashions. In some cases it was difficult to focus on the clothes at all.

When I was a magazine editor in the ’90s, the fashion industry was under attack for glamourising the heroin chic look. Pale, angular, skinny models like Kate Moss and heroin addict Jaime King were in demand. At the time the trend was said to signify a rejection of the healthy, sporty supermodels of the ’80s, when models like Claudia Schiffer and Cindy Crawford dominated the catwalks of every fashion capital, advertising campaigns and fashion magazine cover. But fashion is cyclical. The emaciated look of the mid-’90s was soon shouted down by a horrified global society and the curvy body was back in fashion, courtesy of Brazilian model Gisele Bundchen.

But now the fashion pendulum appears to have swung back from supermodel to super skinny. I have read that the skinniest of the models at Fashion Week were those who worked the European shows. European designers have always preferred thinner models than Americans. And we seemed willing to accept whatever we could get down here. If skinny models are in demand in Milan and Paris, who is prepared to appear unfashionable or uncool by calling out the obvious?

I was heartened to read Vogue editor Edwina McCann’s plea for designers and stylists to choose healthier-looking models following the shock of seeing so many ultra-thin frames on the catwalk last week. Change needs to begin at the top, and in the fashion industry the editor of Vogue magazine carries enormous influence. Still. It takes someone whose opinion is key to speak the truth and create change.

“The fashion media in this country is finally calling out the truth … the emaciated look is ugly.”

When I was the editor of ELLE magazine in the late ’90s a successful, naturally curvy model arrived on our shores looking painfully thin. She was here to promote a particular brand of clothing. When she appeared on the catwalk for the first time, a group of us gasped. There was audible discomfort. We quietly discussed how terrible this model looked. But when her agent said, “doesn’t [model’s name] look incredible?”, 50 heads nodded and a couple even embellished the lie.

The model’s body didn’t just look thinner, it had changed shape. The word at the time was that the model had removed a rib to achieve her body ideal. I was shocked to hear it at the time. And yet we didn’t express the horror we felt. I have thought about this often.

So here and now is the opportunity to right that wrong. Emaciated models with jutting bones are not chic, cool or hot, even if the look is in for at least some sections of the fashion industry. They do not wear the fashion well. I cannot imagine myself in a designer gown when I am feeling uncomfortable seeing their bones sticking out beneath.

The fashion media in this country is finally calling out the truth: the emperor was naked, and the emaciated look is ugly. When the designers acknowledge the economic impact of their choice of model on their business then maybe they will reject the unhealthy ones. Only then can the industry truly start to change.

*Marina Go has been editor of Sunday Life, Dolly and ELLE. This article was first published at Women’s Agenda. 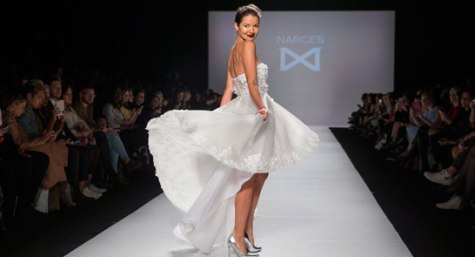 Who are you wearing? The racism and appropriation inherent in fash-speak

Stitching up RSL outrage out of Fashion Week

From the footage I saw on the TV news of Fashion Week parades, I can’t remember one garment. My focus was, unwillingly, on the protruding bones.

Yes they are grotesque. We want healthy looking girls like Elle or Jen Hawkins not stick insects. Does anyone actually buy that catwalk rubbish anyway? The fashion industry has always been a mystery to me.

I looked up Gisele Bundchen to cop a look at this “curvy” woman who challenged the starved, underweight style of 90s models.

Is Crikey trolling, or is the author experiencing body dysmorphia by proxy?

With models like Denise Bidot out there, comparing underweight women to skeletal women is hardly an improvement for the fashion industry, and just repels consumers who see a difference between “beautiful woman” and “self-propelled coat hanger”.

Marina may think she’s being progressive by telling us this, but she’s just proposing her own brand of idealised female beauty. If the fashion industry were to ever get serious about presenting normal-looking women, we might see models of many different shapes and sizes; and, yes, possibly a few very thin ones.

I understand people’s concern over the norm being so unhealthy, and, if models have to have their weight policed at all, perhaps it’s better that the target be within a healthy range. Still, I can’t help but think that the real problem here lies in the concept of an ‘ideal’ body shape that ought to be adhered to.