Drops: what journalists aren’t telling you about their ‘exclusives’

Should journalists accept leaks in exchange for not seeking critical comment? Crikey examines the pros and cons of the media "drops" that you're not told about.

Last Tuesday, journalists in the Canberra press gallery were eager for details of the opposition’s broadband policy, due to be announced later that morning. So they asked the Coalition’s spinners for information. Instead of a regular press release, however, the journos were handed a colour photocopy of that morning’s Daily Telegraph front page story. The headline: “Pledge to slash internet bills: NBN at half Labor’s price”.

The Tele‘s NBN story was a “drop” — the name given to stories that are handed to selected media outlets ahead of their competitors. So was its story the day before: “Ninety billion nightmare”, which detailed Coalition claims the cost of Labor’s NBN could double by the time it’s finished. 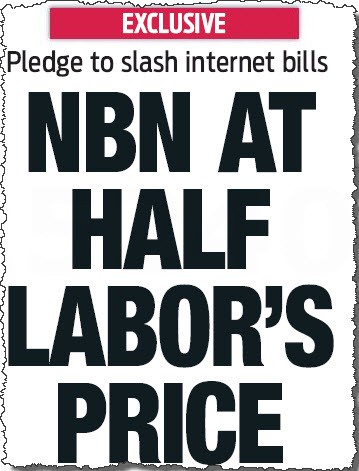 Such stories nearly always involve a simple proviso: the journalist does not approach third parties for comment before publication.

Drops usually appear in newspapers because, despite falling circulation, they still set the morning news cycle. While Fairfax reporters get drops — notably from Treasurer Wayne Swan’s office — you’ll find more of them in News Limited papers. As a rule, News’ Sunday tabloids carry at least one big drop every week.

“The government whinges and moans about News Limited, but they get lots of drops because they have more readers,” explains one press gallery veteran.

Selected reporters at The Australian are also given drops because media advisers know federal political stories — including on social affairs, indigenous policy and education — will get a bigger run in The Oz.

In theory, it’s a win-win scenario. The journalist gets an “exclusive”. The politician gets clear air for his or her policy, at least for a few hours, before opponents start tearing it apart. But what about the reader? Isn’t it problematic that such conditions are placed on the news they consume?

“Oh yes!” replied one press gallery reporter when asked this question by Crikey. “From a reader’s point of view it’s awful. You haven’t served your reader well, but you wouldn’t be serving your reader well if you didn’t get the information.”

And drops don’t just happen in politics. The Australian Communications and Media Authority, for example, hands some journalists embargoed copies of decisions on the basis they don’t seek comment from third parties before publication.

Denis Muller, a senior research fellow at the University of Melbourne’s Centre for Advancing Journalism, says the trade-off involved in drops “makes me uneasy”. “It’s not a healthy relationship at all, and it really ought to have the spotlight shone on it,” he said.

Muller, a former assistant editor at The Age and The Sydney Morning Herald, said: “If it were me — and I really think I’d say this — I’d say, ‘Give me the information, but I’ll use it as I see fit or I won’t take it’.”

“I don’t think it’s unreasonable to say, ‘Don’t shop this to the opposition before we announce it’. The news cycle now is moving so fast. It’s one moment in time that allows the readers of your newspaper to have access to information they wouldn’t have … The opposition can kick the shit out of it the next day.”

Journalists, the reporter says, can also get around the strict conditions attached to drops by adding background into the story. They can also contact the opposition (or government) to “clarify” their position on an issue without technically breaking the embargo agreement.

But no one denies there are downsides to drops. Yes, readers get new, and often important, information. But the news they are consuming is, by definition, not balanced: only one side of the story is presented. The ban on seeking third-party comment also limits journalists’ ability to verify the information they have been provided.

Communications Minister Stephen Conroy, for example, vigorously rejects the Coalition’s claim that the NBN will cost $90 billion. But The Tele did not seek comment from his office before publication, Conroy said on Lateline last week.

Then there is the fact the conditions placed on such stories are not disclosed to the reader. Well, almost never disclosed. Following on from his broadband scoops, The Tele‘s Simon Benson scored another “exclusive” last week by obtaining the Gillard government’s report into high-speed rail. At the end of the story was this curious disclosure: 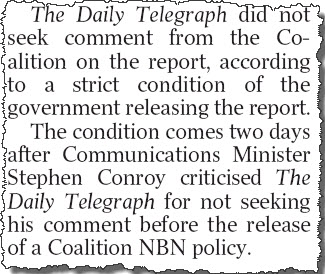 Does this represent a bold new disclosure policy from The Tele? Or just a get-square with Conroy for bagging the paper earlier that week?

While we’re still waiting to hear back from Tele editor Paul Whittaker, you’d have to be a wild optimist to predict a more transparent approach any time soon. The first mover in such a scenario would be at a big disadvantage. And, as one gallery reporter explains, there’s an added proviso attached to many drops: “You didn’t get this from us”.

Ex-eds on newspaper campaigns: what are they good for?

Who really did the best out of the Walkleys?

And when Crikey gets its regular “drop” from the MEAA etc?

So the difference between running a ‘drop’ and being a PR consultant is that PR consultants get paid and don’t call themselves journalists ?

There is no surprise the bought and paid for media survive on government drops. To a certain extent the stay friends way of doing business explains why some stories do not get oxygen. For years I have published allegations in our local newspaper the Peninsula News. With supporting photos explaining how Gosford City Council misled the NSW State Coroner during his inquiry into the deaths of five people at Piles Creek Somersby in 2007. It is silly how so called journalist will claim they can’t touch it because it is defamatory. If it were defamatory don’t you think people named in the full page stories many of them also photographed would have taken action. The allegations have been published often in several local papers. The information is in the public domain. Many of those politicians and officials who have been named by me have been given personal signed copies of what i have published. Edward James 02 43419140

Ellen, when the MEAA simply links to Crikey and says “Click here for our policy” then your parallel would stand up. Drops are always going to happen, but previously we’ve managed to maintain at least the pretense of a balanced and independent media. A line has been crossed here. Might as well just declare Williams the leader of the Opposition and be done with any appearance of separation between the LNP and Limited News.

Abbott’s lavish praise of Murdoch and and his neo-liberal ideology in his speech to the IPA last week, the links between Rupert Murdoch and Tony Abbott are strong. You have to wonder who is really in control of the Coalition’s policies these days.