The Central Bank of Ireland set out to commemorate one of the island's most famous sons with a 10 euro coin. Above the face of James Joyce is apparently a quote from Ulysses:

Wise words of warning. Words said when in opposition have a way of coming back to haunt you when in government, so Tony Abbott and his team should be listening to the warning this morning from their colleague and former immigration minister Philip Ruddock. After an obligatory reference to Labor’s policies to stop unwanted arrivals by boat, Ruddock acknowledged that it would be harder for the Coalition to stop the flow of asylum boats than it was when they were last in power. The recent surge in arrivals would make the issue more challenging. “What we are dealing with is a situation very much more difficult because of the numbers involved and the expectations,” he said. “You won’t deal with those matters unless you use all the weapons in your armoury.”

A cautionary word of advice from the longest serving member of the House of Representatives. Time to start talking now, as Ruddock did, about how much more difficult the task has now become. That there is potential for later embarrassment from exaggerated promises was shown this morning by that always readable Cut and Paste section of The Australian. 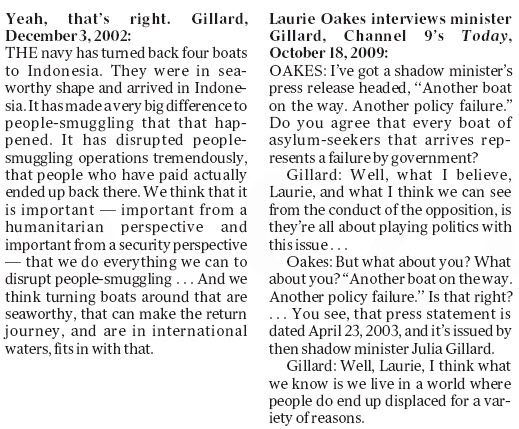 A little civility. What a pleasant change to see John Howard asked by a Labor prime minister to formally represent Australia at the funeral of Margaret Thatcher.

Illustrating a decline. You can argue about the whys and wherefores if you must but the evidence of declining ice in the Artic just keeps coming. This wonderful graphic from the creative mind of Andy Lee Robinson shows why some experts are using the term “Arctic death spiral.” 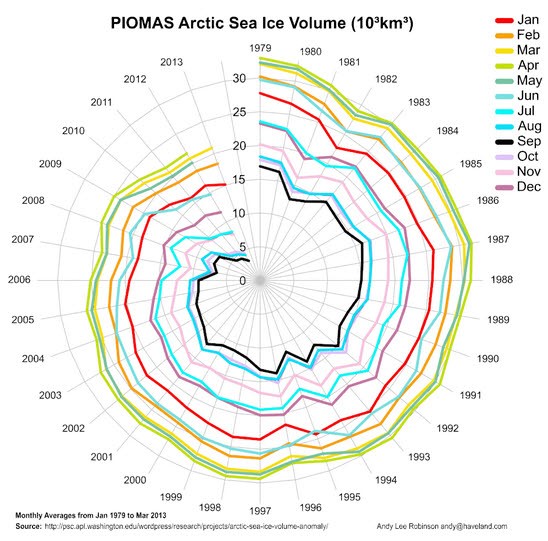 A blooming mistake just a matter of that. The Central Bank of Ireland set out to commemorate one of the island’s most famous sons with a 10 euro coin. 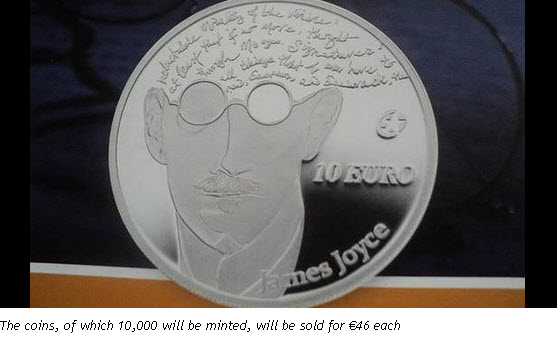 Above the face of James Joyce is apparently a quote from Ulysses:

“Ineluctable modality of the visible: at least that if no more, thought through my eyes. Signatures of all things that I am here to read.”

But reading was not something the Central Bank proof-reader was good at. The line from the third chapter of Joyce’s work, published in 1922, does not contain the word “that” in the second sentence, and simply reads: “Signatures of all things I am here to read.”

Much embarrassment for the Bank but perhaps these comment-makers on the websites of Irish newspapers summed it all up: 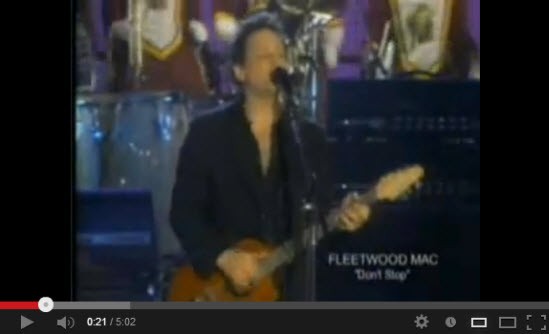 The sheer ongoing racist arrogance of our polity around the arrival of refugee boats is astounding.

What the cowards are suggesting is don’t dare to try and be safe because we will steal your whole life from you.