The market is up 13. ASX 200 Futures were up 11 this morning. Dow Jones finished up 69 on below average volumes. The Dow was 85 at best and down 17 at worst on strong economic data. The S&P500 hit a fresh record high of 1597 during the session. Info tech stocks underperformed as PC […] 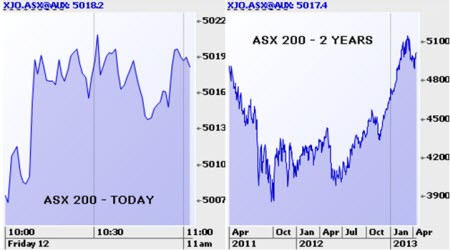 Info tech stocks underperformed as PC sales recorded their biggest quarterly fall in 20 years. Hewlett Packard down 6.5%, Intel down 2.0% and Microsoft down 4.4%. All other stock sectors finished up.

‘Conspiracy theory’ is a misnomer. Help us come up with a better set of words

Hello Marcus,
Any chance you could add the Au$ value at least once a week for us overseas readers? Yes I know I can look it up on Xe or such but as I read Crikey daily it would be handy? Just a thought.