Louise Pratt is set to descend from one to two on WA Labor's Senate ticket as a factional fight for the soul of the party ratchets up.

And in a bitter blow to the party’s “blue collar blokes” faction, Crikey understands delegates aligned to “soft Left” trailblazers United Voice will honour the terms of a deal to round behind Bullock and deliver Chris Evans’ Senate vacancy to United Voice assistant national secretary Sue Lines.

While the number two position is usually considered safe, and will probably be held again in September, a further plunge in Labor’s primary vote from an already low base could end up forcing Pratt to the curb.

The 175-strong state executive is split between about 100 Left and 75 Right delegates. The Left is in turn split 50/50 between the Pratt-supporting blokes on the one hand (the Australian Manufacturing Workers’ Union, the Maritime Union of Australia and the Electrical Trades Union) and United Voice on the other. The Right comprises the dominant Shop Assistants union, the Transport Workers’ Union and the Australian Workers’ Union.

One side of the Left can therefore coral the Right to roll their internal rivals — this is exactly what’s happened this time around.

Thanks to a 14-month-old deal hatched between United Voice and the WA Shop Assistants during the Fremantle preselection, state executive is almost certain to vote up Bullock at number one, Pratt at two and consign Mark Bishop to premature retirement.

The simmering rancour, first highlighted by Crikey in February, has now exploded on Facebook, with Pratt tapping out a wall post yesterday to slam suggestions she had attempted to hatch her own deal with Bullock — presumably to deliver him Evans’ spot, install an SDA acolyte as WA upper house leader and knife United Voice-aligned state secretary Simon Mead.

But Pratt instead unloaded on Bullock, haranguing the socially conservative union leader for his “anti-marriage equality” stance and his objections to a “woman’s right to control her own body”. 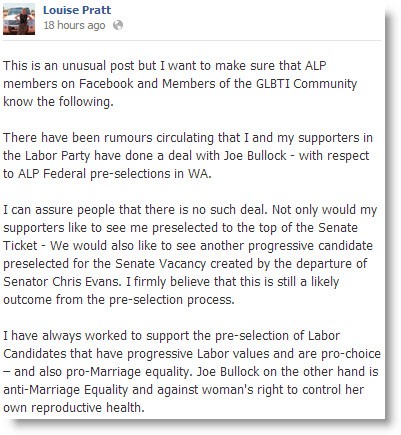 Under the traditional factional arrangement carve-up of the four winnable WA Senate seats is one SDA, one “rest of the Right”, one United Voice and one “rest of the Left”, usually Pratt’s AMWU. But WA Labor’s declining primary vote has led to some amusing shenanigans epitomised by election night hijinks in 2010 when Senator Glenn Sterle was texted alternative job offers at 9.30pm as the disappointing vote trickled in.

Still, for Pratt to lose from number two, Labor would need to fall below 28.6% on the primary vote, which no major party has ever done. If the Greens vote falters, Scott Ludlam would drop out and Pratt would get elected on Greens preferences, leaving four Tories and two Labor.

One senior Left source explained the Pratt situation and its Fremantle roots thusly: “All of this is a mirror of what happened 14 months ago. [MUA national secretary] Paddy Crumlin was running around demanding that [MUA state deputy secretary] Adrian Evans be the candidate for Fremantle. Paddy ran a very strong national campaign saying this is our man and this is our seat and he needs to be installed.”

“They were going to step out of the Left and get the Right to vote for them. All the national secretaries were all on board.”

United Voice instead hatched an agreement with Bullock to vote for the endorsed Left candidate, Simone McGurk, who became the candidate after the “blue collar blokes” absented from the decision. As a quid-pro-quo for that vote the Left agreed to back Bullock on Monday.

“This was about getting a progressive Left woman into Fremantle, and Joe voted for it. And now Joe wants to be number one in the Senate, and that was the deal. All the running around that’s happening now is ignoring the fact that 14 months ago there was a stupid threat to an amazing woman who’s going to be a senior minister one day by some really aggressive blokes and they played pretty dirty and they lost and now they’re screaming that Louise Pratt might end up at number two,” they said.

The senior source attacked Pratt’s social media intervention: “Louise is right in saying that no deal has been done. She’s absolutely right, Joe rejected them outright. The fact that they were shopping it around for a month appears to have slipped her notice in her Facebook post.

“There are no good guys in this. It’s all shit. And it’s going to fall apart after Monday,” they added, alluding to a looming factional rearrangement that is likely to benefit the blokes.

MUA state secretary Christy Cain has pledged to seize control of the state party, writing in today’s West Australian that Labor should be run by people that work with their hands. The union is vigorously recruiting Labor members before the new state executive is divvied up in 8 weeks time. When the spoils are allocated, the industrial left is likely to command a left caucus majority.

What ever happened to Joe Bullock?

Your intro and first paragraph suggests the ALP Senate ticket in WA will be:
1. Joe Bullock
2. Louise Pratt

In the 2nd paragraph you introduce Sue Lines. Where does she fit in – number 3? Given that you say the number 2 position is dicey, presumably the number 3 spot is unwinnable. How then does her preselection for the number 3 spot deliver a bitter blow to anyone?

I’d like to know the gist of what’s happening. Can you please explain it simply and clearly for those of us who don’t have time to wade through screens of insider gossip.

f it’s too much to move beyond the outdated inverted pyramid, can you at least add a key points breakout that summarises the story and gets across the key facts in a couple a paras?

Sue Lines is the candidate for the casual vacancy left by Chris Evans – that is not the same tranche as Joe Bullock/LouisePratt.

Thanks for clearing that up.

It’s time all of this horse trading was made transparent to members. Members who are ‘in’ with particular factions know what’s going on while the rest of us piece it together through the bits and pieces of gossip we hear. It’s crap and it is exactly the kind of thing that turns members off – not that the play-makers would ever know. They’re all so busy talking to each other they have no idea how the rest of us experience this ‘organisation”. I understand how factions emerge and why, and that they have a role to play, but their lack of accountability back to members on how they use the power of their numbers is all kinds of wrong. The play makers decide who’s in and who’s out, on the quiet they ask candidates for pre-selection to withdraw their nomination so as to to interfere with their plans – and to hell with who the membership might think are the best.

What was so great about Chris Cain’s article in The West this week was that it was very clear about how the unions should use their power – to represent workers on workers’ issues. Clear and simple. Not using the power of their numbers, which are largely drawn from unions, to peddle the ideological stance of whoever’s running the union. Representing the workers’ from the workers’ perspective. By exploring that perspective by looking at workers’ priorities outside the immediate workplace then WA Labor can still be broad based and representative of workers.

I admire what the MUA have done in growing membership, but I would like to see a growth in other forms of membership. At least they are taking action on membership. The broader party does nothing about looking at ways to grow membership, and more importantly to keep members. It’s all very well for McGowan to say he wants Labor to represent a broader base, but where is his strategy to grow the connection with that base. Many members would love to see an overhaul in how WA Labor works. But as individual members peppered throughout the organisation, many just aren’t sure how to change within.