North Korea is beating its chest about its nuclear potential. So would the rogue state have the capacity to bomb Australia? Freelance writer David Donaldson asks some big questions. 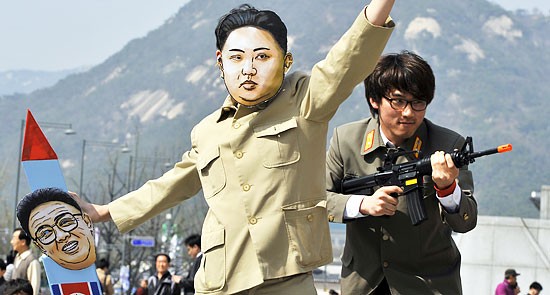 It’s “not completely impossible” that North Korea could deliver a nuclear warhead to Australia — although the rogue state may not have the technical capacity to do so and would have no particular reason to target us, experts have told Crikey. And they’ve warned we should probably be more worried about a nuclear exchange elsewhere.

North Korea’s recent sabre-rattling has come as a reminder that although the Cold War may have ended more than two decades ago, the nuclear weapons never went away. Defence policy expert Professor Hugh White reckons that, despite the Stalinists’ bluster, Australia is pretty safe when it comes to North Korea.

“It is very unlikely but not completely impossible that a North Korean missile could deliver a nuclear warhead to Australia,” he said. It is also very unlikely indeed that North Korea would choose Australia as a target. So Australia’s risks in a crisis are not of a direct attack.”

Thankfully, as far as nuclear weapons states go, North Korea is the runt of the litter. Though nobody knows exactly how many weapons the DPRK has, it’s generally thought that there are fewer than 10, perhaps seven or eight. Certainly, if the North has the ability to deliver any of these warheads effectively — which is possible but far from certain — the use of any nuclear weapon would have a devastating effect on its target.

But to put this number in perspective, the United States possesses 7772 warheads, while Russia has around 9000. France, China and the UK each hold 200-300, while Pakistan, India and Israel are thought to hover somewhere around the 100 mark. South Africa is the only country known to have given up its nukes — it’s thought the apartheid regime got rid of them in the late 1980s to prevent its weapons falling into the hands of a black government.

Contemporary nuclear weapons can be anything from the medium-range and intercontinental missiles — the ones causing problems in Korea — to gravity bombs dropped from a plane, or missiles fired from a submarine. The US and Russia in particular project deterrence through the use of nuclear submarines, which can surface anywhere in the world to fire upon an enemy. Tactical nuclear weapons — those that can be used on the battlefield — tend not to feature as strongly in military planning, as nuking a nearby enemy obviously presents some pretty large risks.

In total, there are more than 17,500 nuclear weapons in the world today, with a collective potential impact of around 120,000 Hiroshima-sized explosions. Around 4600 of these are currently deployed; they are set up and ready to go when the president, prime minister or supreme leader gives the word. North Korea’s arsenal is relatively small.

It’s partly for this reason that most analysts are sceptical that Kim Jong-un would ever use a nuclear bomb. To do so would almost certainly be suicidal for his regime.

Rory Medcalf, director of the International Security Program at the Lowy Institute, agrees Australia has nothing to fear from direct nuclear attack by North Korea. “At this stage there’s no evidence that North Korea can mount a nuclear warhead to any of its missiles,” he said.

“It’s developing missiles that could reach this distance, but these missiles almost certainly do not carry nuclear warheads. It has so few missiles in its inventory, so why would it waste them on Australia? If you look at other countries possessing weapons now, virtually no country would have a reason for wanting to threaten Australia.”

But while Australia may not be in the direct line of fire, the threat of nuclear winter — catastrophic climate change resulting from the vast amounts of soot and smoke poured into the atmosphere by the massive fires that would result from the detonation of a nuclear weapon over a modern city — means that a nuclear exchange anywhere in the world could have serious global effects.

Medcalf thinks it’s unlikely, however, that we’ll be seeing a nuclear conflict anytime soon: “There’s a small possibility of conflict between Pakistan and India sometime in the future, possibility with a nuclear exchange. And there’s the very small possibility of a conflict in Asia between the US and China escalating to nuclear. But I would stress that that’s very unlikely. There is also Iran, but they don’t have nuclear weapons at the moment, so I’d put that in the medium to long-term basket.”

White argues that although Australia is safe when it comes to threats from North Korea, policy-makers should beware of complacency on the territorial disagreement over the Senkaku/Diaoyu islands between China and Japan: “The biggest risk as I see it is that a conflict over an issue like the Senkakus could escalate into a nuclear exchange between the US and China. This is not a high likelihood, but it is probably higher than most people imagine.”

Despite the low likelihood of nuclear war, the experts agree that we should still take nuclear threats seriously. Apart from rogue states like North Korea or Iran, there are the risks posed by phenomena such as nuclear-armed terrorists, or technical problems or miscommunication resulting in an accidental atomic exchange between large powers, “because although the possibility of nuclear war may be very small, the impact would be catastrophic”, says Medcalf.

“There’s been a serious effort to pursue nuclear disarmament in recent years, but it’s hit a plateau for the moment,” he told Crikey. “A lot of countries are resisting it, but I think that any efforts to reduce the number of nuclear weapons or their use in defence policies is in the interest of peace and security. Pakistan and Russia both have policies that they would strike first in any nuclear war, and anything we can do to move away from that is a first step towards nuclear disarmament.”

How to assuage North Korea and avoid total war

US reveals plans to put nukes in your neighbourhood

Who said it, Donald Trump or Kim Jong-un?

Saw a cartoon yesterday….based around the snickers ad. It was funny. He needs to have a snickers – he always becomes a warmonger when he’s a bit hungry

A large part of their antics engages our willingness to be afraid. There is far more cold capability for threat in the military equipment all around the world, but we dont get hysterical about it.

We might serve history better if the world’s military were tooled-up for fighting the imminent climatic disasters than fighting each other.

>>But while Australia may not be in the direct line of fire, the threat of nuclear winter — catastrophic climate change resulting from the vast amounts of soot and smoke poured into the atmosphere by the massive fires that would result from the detonation of a nuclear weapon over a modern city — means that a nuclear exchange anywhere in the world could have serious global effects.<<

What complete and utter rubbish – the concept of a nuclear winter is based on a superpower scale nuclear war – involving thousands of nuclear detonations – limited nuclear war would be a very bad day for a lot of people in the immediate area – and downwind – but burning Seoul or Tokyo to the ground would have next to zero impact on the world's climate. And besides it would take all of NK's current weapons stockpile to burn either of these cities to the ground. If it was that simple to set off a global cooling event – we'd be burning any number of forests to counter act AGW. This article is based on junk science, and should have been held over for a major rewrite.

As I recall a North Korean ship delivered a dingy load of heroin to the NSW coast.A cargo ship with an large ungainly nuke and a basic very simple drone could deliver a bomb to the heart of Sydney.Which is a rather complicated method when you consider a ships container could be delivered containing a bomb that could be triggered remotely simply as cargo on any commercial vessel.It is very very dangerous to scoff at this insane regime.Meanwhile China looks on relishing the discomfort and the enormous defence cost of this debacle that they fund with loans to the US.