It's been more than two years since the $1 milk price war began. But are Coles and Woolworths indicating that the end of the war is in sight? 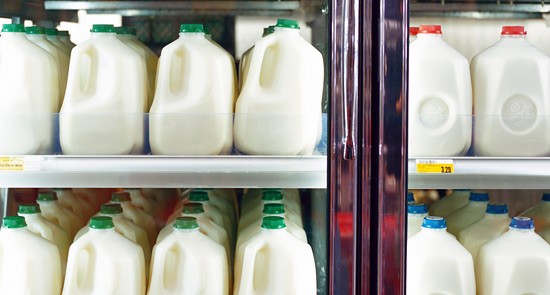 Two years after it began, is the milk wars’ expiry date finally up?

Yesterday Coles announced that Murray Goulburn, a Victorian farmers-owned co-operative, and Norco, a NSW farmers-owned co-op, have secured the contracts for supplying Coles home brand milk in Victoria, NSW and south-east Queensland for the next 10 years.

Two new $60 million milk processing plants will be built in Melbourne and Sydney, and Norco’s Gold Coast factory will be upgraded to handle the increased volume of milk.

“This is really a huge win for people power,” said Lynne Strong from NSW’s Clover Hill Dairies. “Consumers have been saying, ‘We want our supermarkets to look after Australian farmers’. And the supermarkets recognise that, they’re not silly.”

A 10-year-contract means that Murray Goulburn and Norco can offer long-term contracts — and better prices — to farmers. “The most important thing here is that we get reassurances that in the contract with Murray Goulburn [and Norco], farmers will see an increased farm gate return,” said Nick Green, spokesperson for Australian Dairy Farmers.

So are the milk wars finally over — or is it at least the beginning of the end?

Two weeks ago Woolworths acknowledged that $1 milk was unsustainable as it launched Farmers Own, a new line of milk from seven NSW dairy farms that will sell their milk directly to the retailer, a trial it hopes to increase in the future. This deal bypasses the traditional major processors and nets approximately 50% more for farmers. The farmers contacted Woolworths directly after processor Parmalat told farmers a new contract from the supermarket giant meant it would have to pay them even less.

Even Coles, which fired the opening salvo in the milk wars, is no longer guaranteeing it will continue the super low price: “$1-a-litre milk is here for now, but we don’t commit forever,” John Durkin, the supermarket’s director of merchandise, said yesterday.

The deal with Norco and Murray Goulburn, two Australian-owned farmer co-operatives, highlights that Coles is taking farmers’ — and consumers’ — concerns seriously, says Strong. “They’ve identified that Australians want to look after Australian farmers,” she told Crikey. “I think they are starting to listen to us,” added dairy farmer Phillip Bond from the Farmer Power activist group.

“Milk price wars have been good for farmers, it’s extended and driven efficiency.”

But the milk war wasn’t the only reason for dairy farmers’ pain. Climatic issues are critical to how much money dairy farmers can make. The NSW south coast has been affected by drought for nine months. Northern NSW and Queensland has experienced severe flooding. Victoria has also experienced severe weather conditions. This means farmers have been unable to grow enough grass for their cows and have had to supplement with expensive grains and hay.

“Milk price wars have been good for farmers, it’s extended and driven efficiency,” said Victorian dairy farmer Tim Kooloos. “We’re running at about half the profit level we would expect, [but] 10% is due to milk prices and the remaining 40% is due to not being able to grow grass.”

“The industry is crippled,” said Strong, the sustainability manager at Clover Hill Dairies. Clover Hill Dairies currently supplies its milk to Lions, a major processor that just lost its Coles contract to Murray Goulburn, and at one stage was offering only 13c per litre of milk to farmers. Strong acknowledges that climatic issues have hurt that industry but says the effect of the milk price wars is ultimately on farmer’s pride. “It’s just wiped out confidence at the farm,” she said.

Milk is now viewed as a super cheap product, says Green from Australian Dairy Farmers. “The argument the supermarkets have made, including Coles, is that the farmer still receives a good price for the milk and that Coles subsidises that cost. But ultimately the brand is damaged through that process.”

Dairy farmer Bond agrees: “They are still devaluing our product, which is the main problem.”

Farmers banding together in co-ops such as Murray Goulburn to supply the supermarkets may be the best option of all (the majority of processors, like Lions and Parmalat, are multi-nationals) to ensure dairy gets taken seriously. “They are very big, powerful supermarkets,” said Strong. “The only way we’re going to compete is to get equally as powerful.”

Kiwis farmers just got a milk price rise — so what’s our farmers’ beef?

Has anybody asked Coles & Woolworths why they don’t use the same mechanism on other products..say petrol

Take on giant oil companies…I’d like to see that

On principle I never purchase a product with Coles or Woolworths badging. But, hopefully, dairy farmers can make this new deal work to their advantage.

Boutique dairy farmers get my custom.

Norco isn’t a “Queensland farmers-owned co-op”. It is owned and run and supplied by far north coast NSW farmers.

What drought on NSW South Coast – a little dryer and hotter – than usual – but there is no drought across the NSW South Coast – neither BOM or NSW data show such. If the author has data to the contrary please share.

I stopped drinking full cream milk after my cholesterol test last year and converted to skim. Then I joined the Animals Australia campaign over live food exports and they sent me information about bobby calves. It started me thinking about why we really drink milk in the first place. Why do adult humans drink something intended for baby bovines? Thousands of male calves unfortunately born the wrong gender get sent to the abbatoirs without ever getting anything to drink. Usually after about 30 hours of life. Stories of cows chasing the trucks down the road bellowing after their calves. I’d rather have black coffee than a cappucino. Why don’t the farmers use artificial insemination to prevent the birth of bobby calves like racehorses? Sorry for dairy farmers but it is just wrong. People should drink less milk and dairy anyway.