Billionaire mining heiress Gina Rinehart looks set to be cross-examined by her kids' lawyers later this year. But they're not the only parties peeved with the iron ore magnate. 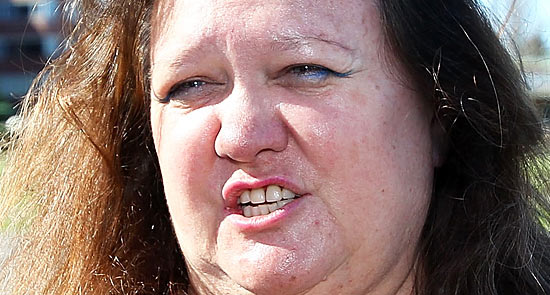 The news this morning that Gina Rinehart will likely take the stand in October to be cross-examined by lawyers representing two of her children will come as a welcome relief to the two senior journalists battling the mining tsar to keep their sources confidential.

A directions hearing in the NSW Supreme Court resolved today that a seven-day civil trial would proceed later in the year to decide once and for all whether John Hancock and Bianca Rinehart can remove their mother as a trustee of the Hope Margaret Hancock Trust, which owns about a quarter of Hancock Prospecting and could be worth over $4 billion.

One of Rinehart’s targets, the West Australian‘s Steve Pennells, was first with the news, tweeting that the court had set down a trial date of October 1 to provide “certainty of finality”. The date was conditional on the children’s personal desire to assume the trusteeship — Pennells reported that another, non-family name had been put forward by the duo, in which case judge Patricia Bergin said Rinehart’s eagles would be allowed to put forward more argument. The case will return for another directions hearing on May 8.

Way back in September 2011, John Hancock and his two siblings, Bianca Rinehart and Hope Welker, launched a court case against the multi-billionaire to oust her as a trustee. Last month Welker withdrew from the action, which has played out on the pages of the nation’s newspapers, with leaked emails and background briefings regularly emerging under Pennells’ byline. He won the Gold Walkley Award last year for his Rinehart coverage.

But if there is one recent event that puts in stark relief journalists’ concerns over Rinehart’s 15% presence on Fairfax’s share register, and her significant holding in Network Ten, it was a demand by lawyers that petition site Change.org alter the wording of a press freedom petition to include her views, just as an overzealous editor might as deadline looms.

Change.org has been hosting a campaign to force Rinehart to drop her subpoenas against Pennells and Fairfax jounalist Adele Ferguson, demanding access to private correspondence between the two senior journalists and their sources. John Hancock is of particular interest in light of an apparent confidentiality clause in a private deed signed between Rinehart and her children.

A legal letter sent by Corrs Chambers Westgarth partner Mark Wilks to lead petitioner Miles Heffernan this week — and quickly posted on Hancock’s website — claimed that the subpoenas didn’t have anything to with revealing a source, because the source — John Hancock — was already well known.

“The reality is a far cry from the characterisation you have sought to make of the situation. Both Mr Pennells and Ms Ferguson have spoken to Mr Hancock in full knowledge of his contractual restraints on so doing. This is not a matter related to revealing sources as the journalists have repeatedly published Mr Hancock’s name and quoted him directly. In a confidential arbitration involving Mr Hancock (but not the journalists) my client is seeking access to those communications.”

But the most noteworthy stanza — unreported in the media to date — was Rinehart’s demand that the precede of the petition be changed to include her take on the issue “so that the petitioners can make a properly informed decision about the merits of the petition”.

It began like this: “We note that our client provided you last week with our email to Fairfax and other relevant media outlets arising out of the sensationalist reporting of the subpoenas issued.”

“We further note that you have failed to make any mention of that email or the information contained therein on your website. We assume you are refusing to do so as it does not suit the agenda you are pushing.”

The Media, Entertainment and Arts Alliance has expressed grave concern over Rinehart’s “unprecedented assault on press freedom” and has called for uniform shield laws. Last year, Fairfax journalists and the union were also aggrieved when Rinehart refused to sign the company’s long-standing charter of editorial independence, which safeguards the impermeable firewall between the board and their copy.

Under the charter, demands to alter published material in the manner of Rinehart’s Change.org intervention would of course be strictly prohibited.

What can citizens and travellers do about border closures? Appears, not much

A key element of this whole sorry Hope Margaret Hancock Trust saga is the issue of way the trusts are used to avoid tax. Trusts offer no advantage to wage and salary earners who contribute the greatest proportion to the tax take of the Federal Government. They are a regular trick used by others to avoid (sorry, minimise)tax.

I recall Peter Costello had a go at dealing with this massive class warfare weapon used by the pecunious against the less well off but even he couldn’t storm this barricade of advantage.

Is there a chance someone with more knowledge of these matters might have a go at estimating the tax advantage Gina and her family might gain from a $4b trust?

Shouldn’t the existence of such a huge tax ‘minimisation’ structure bring the spotlight onto the whole trust scam?

Private litigation should have no access to “sources” private deed of confidentiality broken ? when the tubby toes herself had already trashed said deed, and had broken the terms of the Trust that the this deed relates to? Unearned Money = Power has corrupted much better human beings than tubby toes. Mother Theresa, Nelson Mandela, she is not.