Tabloid jitters. It’s full speed ahead towards the new multi-platform publishing system Eidos Methode for subediting at News Limited. The new digital-friendly system for subbing and layout is due to start mid-year. This seems to mean hard-working journos will be subbing their own work, adding headlines, images, video, stand-firsts and search engine optimisation words (smart little words and tags to attract the googler). And what training are these journos getting? A 15-minute online course? We’re hearing rumours from the newsroom floor some journos think they are not being given adequate training and they’re worried the new system might not work well and could be time-consuming. There are also jitters about how journos will be assessed for their workflow. If you’re a News insider, tell us your thoughts on the new system.

Wrong hire? Which Victorian building industry association has made the mistake of hiring a former Labor staffer with links to the CFMEU in a key government relations role? This at a time when there is a Liberal state government trying to reduce the influence of this union on the construction industry.

Inside Turnbull’s head. Liberal types might have been a little nervous at Tony “I’m not a tech head” Abbott talking about the internets yesterday as he helped Malcolm Turnbull launch the Coalition’s policy. While Abbott appeared to carry it off, did anyone think Turnbull looked a little unimpressed when his boss was speaking? A reader thought so, and obligingly sent us this screen-grab of the telecast. 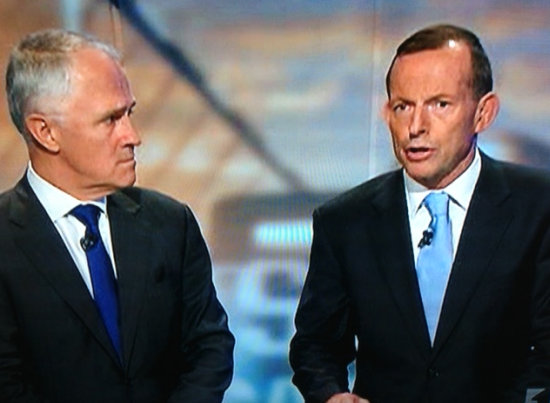 This seems an irresistible opportunity for a Crikey photo caption competition. What is Malcolm thinking? Send in your entry and please let us know if we can use your name if you’re shortlisted, or if you’d rather stay anonymous (you can always use a moniker). The winner can pick from a selection of new books and DVDs that we have here in the Crikey bunker.

Watts’ Gellibrand preselection. After Crikey broke the news yesterday that tech-savvy former Stephen Conroy staffer Tim Watts had triumphed in his preselection battle for the safe seat of Gellibrand, some curious details have begun to emerge about the vote’s mechanics. As we noted, local Turkish stacks loyal to the western suburbs Suleyman political family — despite earlier pledges not to do so — were instructed to round behind Watts, leaving former Melbourne City councillor Kimberley Kitching languishing in second place. There are shocking suggestions the 24 Suleyman ballots had been pre-marked with an “x” in adherence to senior powerbrokers’ wishes. Interestingly, ruling overlord Hakki Suleyman is a “good friend” of Conroy and continues to work part time in his electorate office. Scion Natalie Suleyman — who has reportedly been guaranteed the third position on Labor’s Western Metro ticket next year in return for the tranche — works for key Conroy ally and Ivanhoe MP Anthony Carbines, while son Mem Suleyman toils as an organiser at the Conroy-sanctioned Transport Workers Union. The split in Labor Unity (Kitching and Watts are both members) is now expected to spread to looming Public Office Selection Committee elections,  a very important mini-battle indeed as Victorian Labor mulls preselections for the 2014 state poll.

Facebook serial offender. Crikey enjoyed this vid of NSW upper house Labor MPs Adam Searle and Amanda Fazio checking out memes and Facebook during a parliamentary hearing. A little mole suggests Fazio might have a habit of this:

“When I was a state political reporter in Sydney a few years ago, our cameraman shot her playing a game — something like Tetris — during an important parliamentary committee. We used it in the story. So she is a serial offender. When I saw her a little while later at a function, she shrugged her shoulders and laughed.”

Suleymans spin their way out of Brimbank

I can’t use the the link for the What is Turnbull thinking caption competition but my suggestion is “Does this oaf even know what the Intertube is?”

Turnbull really looked uncomfortable about the “fraud-plan” announcement. I’m sure he believes it’s wrong, but he toes the line of Murdock who definitely wants to scrap it. Why you ask, well fibre to the home/premises is perfect for IPTV (internet protocol tv) providers and Murdock would lose lots of $$$. Simple as that.

“They tossed me for this tosser?”