Yes, Malcolm Turnbull knows Labor's NBN policy of fibre to the premises is technically superior than the Coalition's plan. But he argues this is not the only factor.

With the Coalition broadband policy now on the table following Malcolm Turnbull’s points-winning launch yesterday, the questions at the core of the NBN debate are:

The Coalition’s policy and the accompanying 36-page backgrounder present a coherent and powerful argument. Most of it will be broadly familiar to anyone who’s been paying attention to what Turnbull has been saying for the last three years — as opposed to just whining that he doesn’t get that FTTP is technically superior. He knows it is, but his argument is that technical superiority is not the only factor that needs to be considered.

Dispensing with the technical issues first, there’s the unarguable fact that NBN Co’s FTTP runs at 100Mbps today and maintains that performance regardless of the customer’s distance from the exchange. It’s easily upgradeable to 10 times that, 1Gbps, by replacing the endpoints. Google Fiber, as they spell it over there, is already rolling out 1Gbps in selected US locations.

The speeds achievable with fibre to the node (FTTN) can be highly variable, depending on the quality of the final copper cable segment, distance from the node to the customer’s premises and the technology used for that final section — but whatever technology used, it can never be more than about 100Mbps thanks to physics.

Yesterday Simon Hackett, founder of internet service provider Internode and now a director of iiNet, included this cheeky chart in his presentation to the CommsDay summit. It plots the maximum data speeds achievable with different technologies versus distance, FTTP (labelled “FTTH” for fibre to the home) versus the various xDSL technologies that form the final part of FTTN … 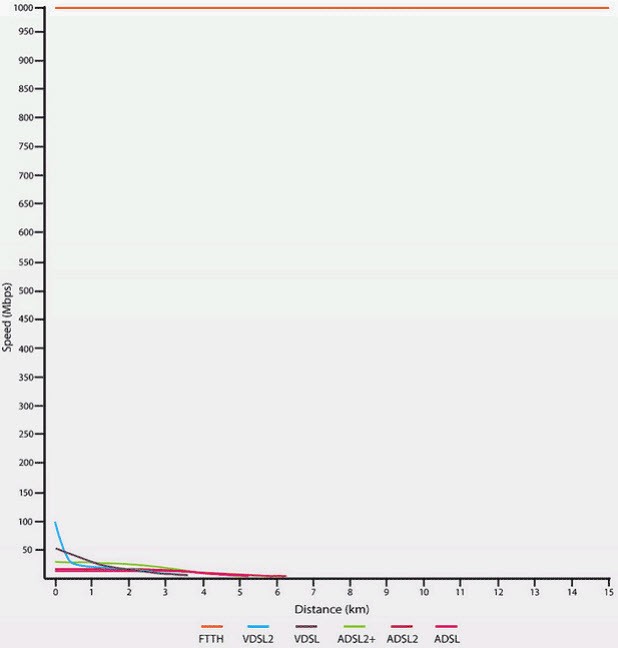 It’s cheeky because with FTTN you don’t run the xDSL stuff for more than about 600 or 800 metres, so we’re really only looking at the left-hand 15th of the chart. Still, it makes the point. FTTP’s potential is all the way up the top, FTTN’s is all the way down the bottom.

Which brings us back to our core questions. Turnbull points out, quite rightly, that even an entry-level 25Mbps download speed is more than enough for current home needs and then some — including several simultaneous high-definition video streams, the traditional example of a capacity hog.

He acknowledges some users may demand more — he cites architects or software developers shunting large files around — but argues the needs of these few don’t justify the more expensive and slower-to-deploy infrastructure of FTTP for everyone when it’d be quicker to do a FTTN rollout and get at least some improvement sooner for more people. Anyone who needs even more, and sooner, can pay for it — after all, it’s a legitimate business expense.

Turnbull tends to avoid discussing the issue of upload speeds, as does Labor. Solid upload speeds are important if you’re creating and distributing large files, or streaming out your own live video, rather than passively watching stuff, but that depends on how the retail broadband products are configured and, again, there’s an argument that creators can be dealt with on a case-by-case basis rather than providing the capability for everyone up front.

Counter to this argument is the idea that more bandwidth will encourage the development of services we have yet to imagine, benefiting all. One past example is Skype: the video chat product couldn’t be developed and deployed commercially until a critical mass of users with enough bandwidth made it worthwhile. Turnbull’s backgrounder hoses that down:

“The greatest uncertainty overhanging investment in next‐generation fixed networks is not over costs, despite the mystery that surrounds NBN Co’s refusal to be open about the full capex cost per premise of its rollout. It is over revenue and user demand; nobody knows what applications may emerge to use the bandwidth that fibre provides, or what value consumers might place on them.

“At the moment the only answer to this quest for a ‘killer app’ for fibre is more and better television.

“In markets such as the US, where cable TV subscriptions are an embedded part of consumer behaviour, this may tip the scales in favour of investment. But relying on TV in addition to broadband and voice to drive revenues is less persuasive in Australia, where subscription TV penetration is lower.

“Uncertainty over demand is why many private investors are choosing to defer investment in FTTP and, if they are incumbents or otherwise able, to instead deploy FTTN. FTTN puts less capital at risk. Deferring an expensive and irreversible investment commitment such as FTTP, to the extent this is possible, is prudent commercial management if it permits more information about actual usage and investment returns on fibre to emerge.”

In brief, Turnbull would deride this as “build it and they would come” wishful thinking. Proponents might well counter “built is and it becomes possible”. And Turnbull’s rejoinder would be all about fiscal prudence.

Prudence is the core of the Coalition policy, and about its comparison with Labor’s NBN. The backgrounder steps through the various scenarios and spells out the assumptions. Those wishing to claim Turnbull is wrong need to step through those and point to the errors — and Turnbull’s approach is efficiently business-like. Turnbull told the tech press briefing yesterday:

“Everything’s obviously very sensitive to revenue, right? So we’ve assumed the same revenue assumptions for both Labor’s NBN and for ours.”

He’s also assumed a global interest rate of 4.5% and assuming it’ll cost $900 per premises to run FTTN past it. Turnbull again:

“That is a very conservative assumption. That is a lot more than is being spent in northern Europe, or the United States, to pass a premise with FTTN.”

For Labor’s NBN, Labor has assumed $3600 per premises for FTTP. According to Turnbull:

But the model is highly sensitive to per-premises prices. It’s when you plug in $4000 or even up to $5000 and add in other adverse options that you start to see the blowouts to $90 billion The Daily Telegraph has been reporting. Turnbull has simply described the potential outcomes and noted the risks; The Tele did the pick-and-screech.

Hackett summarised the key objections to the Coalition plan. FTTN isn’t as simple as its made out, with problems ranging from it having double the power consumption of FTTP to having to negotiate the siting of 60,000-odd node cabinets with local councils to having to service the nodes’ batteries and more.

And then the whole FTTN shebang would have to be upgraded to FTTP anyway at some point — unless demand “magically plateaus”, as Hackett puts it, at around two to three times the current level. History has shown a continuous, unbroken increase. Any new data infrastructure that’s deployed has its capacity filled sooner rather than later. And yet assuming that will continue to be the case is a belief, not science.

Turnbull has factored in operational costs sourced from existing operators. He’s also provided, on page 15, his working-out to challenge the notion that building FTTP in one hit now is, overall, cheaper than a two-step approach — using the kind of modelling that investors are used to seeing. It’s there to be challenged.

Ultimately, it’s a choice between two sets of beliefs. The Coalition’s mix naturally includes “private ownership and an open, competitive market create more direct incentives for efficiency and lower prices for consumers” and “private investors are usually better placed than taxpayers to evaluate, fund and bear the risk of new investments in networks or technologies in an increasingly dynamic sector, and they’ve presented a business plan”. Labor’s naturally includes issues of equity and building infrastructure for the community good. That’s been matched with the not-unreasonable technologists’ beliefs about the empowering and enabling nature of data networks — but they are nevertheless “just” beliefs.

And in any event, how much of this stuff should the government pay for, versus individual householders and businesses?

Between now and September 14 the broadband battle will be fought on these two fronts: left-brain hard numbers and right-brain beliefs, gut feelings about the benefits versus the risks, and ideology.

Your full sensory perception (sight, sound, touch, taste, smell) is the equivalent of 100 Megabits per second.

So in a few years when the science boffins invent a virtual reality headset, your Internet speed will be capable of immersing all of your senses in a virtual world. You could play an actual role in the latest movie. Have sex with your favourite celebrity. Crowd-surf at a music festival on the other side of the world. Fly.

Something worth considering when Turnbull says that the only use of the gold-plated NBN will be faster video. You don’t really need much imagination to guess at what the NBN will unleash.

It seems Stilgherrian was dazzled by Turnbull’s charisma and business-like language because this piece is again mushy-headed on the obvious weaknesses of a magic copper approach. See Keane today for a much more incisive and less credulous take.

I mean, I don’t see how it can be reasonably denied that a high provision GPON employing an open access model for television, phone and internet constitutes a real restructure of telecommunications in Australia with exciting potential for new platforms and services proliferating in the future. This isn’t about a single universally-acclaimed “killer app” which absolutely demands fiber’s speeds and symmetry. So frankly it’s asinine to frame it as a cheap shot against mere “belief”. We’re talking about the near future in terms extending what we know about existing trends and capabilities – not some nebulous probably-wrong futurism about robots butlers.

I think it’s dubious to write a comparison piece without identifying that one plan offers a real structural reform that liberates us from incumbent barriers with a high performance network which will see us through for the next century, whilst the other plan barely improves service on the ground from existing ADSL2+ speeds for a comparably high cost, whilst preserving incumbent players by ratifying their bottleneck assets in the CAN, and keeping in copper network in costly service.

Of course there are arguments there which qualify matters, but we read Crikey to get context and analysis of how well those arguments grapple with the truth. You suggest a point by point response is necessary because Turnbull us thorough, well such a point by point has existed on Whirlpool and dozens of online technical fora since the idea of national broadband network entered the national conversation.

“So in a few years when the science boffins invent a virtual reality headset, your Internet speed will be capable of immersing all of your senses in a virtual world. You could play an actual role in the latest movie. Have sex with your favourite celebrity. Crowd-surf at a music festival on the other side of the world. Fly”

And this will improve Australian productivity, education standards, wealth and social equity exactly how?

Knowing that you water pipes were old , worn out , degrading and indequate would build a new system almost to the house would you leave the old system that you know you’re going to have to replace it later at more exp[ense and inconvenience later?

Would you build a Colour TV transmitter and yet only allow Black & White TV to be used?

If you answer Yes to these then , unfortunately, the Opposition plan makes sense.

A sense that those with the true technical skills reject